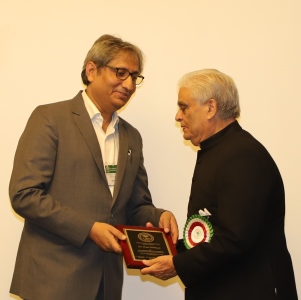 The 18th Annual Convention of Aligarh Alumni Associations (FAAA) (for Aligarh Muslim University -AMU, India) was hosted by the Atlanta chapter on July 26-28, 2019 at Double Tree Hotel by Hilton, Roswell, GA. The convention theme was “Sir Syed’s Vision and the 21st Century.” More than 125 delegates attended the sold-out event from all over the USA, Canada, India, and the Middle East—a record attendance for FAAA conventions.

On Saturday, Tilawat-e-Qura’n by Dr. Ahmadullah Siddiqi was followed by a welcome by Dr. Asif Taufiq, AAAA President. Dr. Rashid Naim and Dr. Ghulam Nadri of Georgia State University presented their findings on Sir Syed’s vision and its relevance on Muslim educational traditions and empowerment. Dr. Razi Raziuddin showed the failure of Muslim institutions and individuals, 150 years following the debut of Sir Syed's mission, to make any significant headway in advancing it. 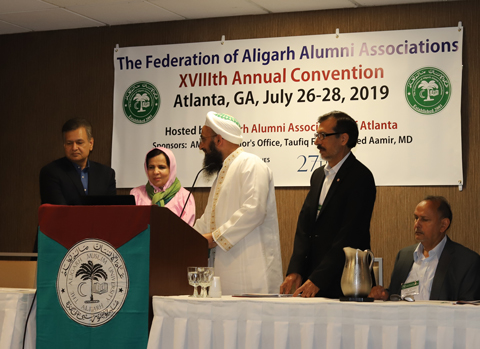 Mr. Moez Wajihuddin of Dawat-e-Hadiya presented a message from the chancellor of AMU, emphasizing the need for commitment to acts of kindness and generosity. He further said, “Knowledge is a means of ascension, both spiritual and material. … knowledge and action combined are the wings upon which we take flights.”

Professor Sufiyan Beg, Chairman AMU Alumni Affairs, spoke about AMU’s current research and academic developments. He hoped for an environment that would inspire students for intensive research in science and other fields. In a powerful speech, Guest of Honor Mr. Abbas Akhil, House Representative, New Mexico, spoke about how Aligarh prepared him for what he is today; he also shared his experience of running for political office and emphasized the importance of holding public office to influence and help citizens.

Chief Guest Mr. Ravish Kumar of NDTV gave an overview of deteriorating education and media status in India. He explained how systemically the entire education system is being distorted based on myths rather than facts or scientific researches. He emphasized the need to get involved, to protest and to resist these destructive forces, in the broader interest. This received a standing ovation.

A talk on “Global Initiative and Trends” was given by Dr. Wesley Barker of Mercer University, Prof. Anil Pradhan and Prof. Sultana Nahar of Ohio State University (OSU), and Prof. Mustaque Ahmad of Georgia Tech. Dr. Wesley shared her and her students’ experience of visiting the AMU campus for a summer program. Profs. Pradhan & Nahar gave an overview of Indo-US AMU-OSU Collaboration in STEM Education and Research.

In the evening, delegates divided into groups for discussion and recommendations on “Motivating, Strengthening, & Growing Member Associations.” Previous efforts were described by Dr. Moyeen Haque. Many useful and creative recommendations were shortlisted: from improving website, nominating young councilors, to forming of new associations, and changes in bylaws. Mr. Umar Farooq concluded the session.

The convention banquet began with recitation from the Holy Quran by Mr. Omer Kamal followed by welcome address by Dr. Rasheed Ahmad, President FAAA. Dr. Ahmad noted that Sir Syed symbolizes the phoenix which will continue to regenerate and to be born again. He laid out some of the proposals for AMU and FAAA: campus orientation tour, digital newsletter, and greater participation in extension lectures on advanced topics.

Mr. Ravish Kumar, anchor and TV journalist, NDTV India, spoke about responsible journalism and India’s secular democracy. He recalled the changes Indian society is undergoing and the various recent incidents. The color and tone of any event is viewed through a polarized prism. He was concerned about the loss of objectivity in the media. He emphasized the urgent need to effectively disseminate positiveness and respond to fake narratives through social media. His talk was honest, factual, cogent, and well-referenced. Once again, he received a standing ovation. 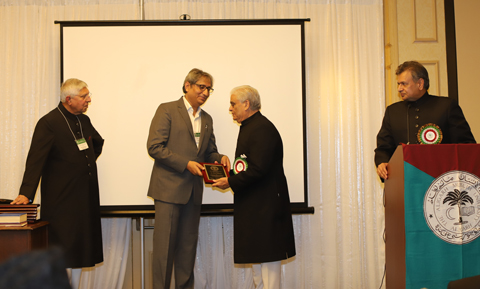 Awards were given to Dr. Farzana Bharmal, Dr. Asif Taufiq, and Dr. Wasi Siddiqui for their patronage and services to AAA Atlanta, and to Dr. Nausha Asrar, Dr. Tariq Haqqi, and Dr. A. Abdullah for leadership and dedication in FAAA. Special awards were given to visiting guests, Dr. Sufyan Beg, Mr. Abbas Akhil, and Mr. Ravish Kumar. 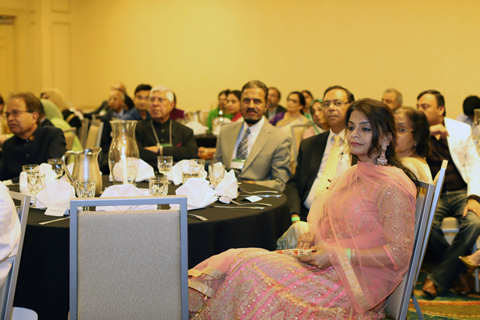 After a delicious banquet attended by around 190 people, a stage play on Sir Syed and Aligarh Movement was presented by AAA Washington, D.C. It was followed by University Tarana, which drew everyone onto the stage. For Ghazals & Geet, Mr. Azhar Mahmood and Dr. Shahid Rafique delighted the audience with melodious songs and powerful ghazals.

The last day’s session for interaction of office-bearers with delegates and member associations included discussion of FAAA Bylaws with Dr. Saif Sheikh and Dr. Moyeen Haque. After the noontime convention closing, delegates were given a driving tour of Downtown Atlanta, including Georgia Tech, CNN, Coca-Cola, Olympic Park, etc.

This sold-out event was meticulously planned and executed by AAA Atlanta team and FAAA steering committee. All the arrangements from airport pickup, speakers’ selection, session topics to time management, entertainment and post-event sightseeing received very high marks from the attendees.

Aligarh Alumni Association of Atlanta (AAAA) is a non-profit, 501(c)(3) organization consisting of the graduates of Aligarh Muslim University (AMU), India and the subscribers of Aligarh educational movement. In 1877, the great educationist and social reformer, Sir Syed Ahmad Khan founded the Muhammadan Anglo Oriental College (MAO) in Aligarh (70 miles SE from New Delhi) which later became Aligarh Muslim University in 1920. The institution is patterned after Oxford and Cambridge universities. Spread over 467.6 hectares, Aligarh Muslim University offers more than 300 courses in the traditional and modern branches of education. It draws students from all states in India and from different countries, especially Africa, West Asia and Southeast Asia. The university is open to all irrespective of caste, creed, religion or gender. It ranks 8th among the top 20 research universities in India.