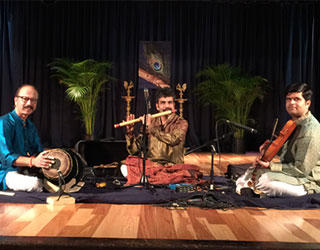 Fans of Indian classical music enjoyed a rare treat on Sunday, November 1, 2015 when flautist V.K. Raman, violinist Mysore V. Srikanth, and mridangam player Poovalur Sriji delivered a truly masterful performance at the Hindu Temple of Atlanta. The concert was part of the initial festivities as the temple prepares for the Ati Rudram festival which is slated to commence on November 18.

Raman is one of the world’s foremost flautists formally trained in the South Indian Carnatic classical style and has performed in hundreds of venues around the world. His accomplishments include dozens of albums and other musical recordings which range from formal Carnatic classical music to East-West fusion themes. Though Raman has performed in Atlanta several times before, this most recent stop as part of his current national tour was his best ever performance. The concert included a broad range of samplings from famous and more esoteric Carnatic ragas and composers. The audience was treated to works by Tyagaraja, Muthuswamy Dikshitar, Syama Sastry, Swati Tirunal, and Jayachamaraja Wodeyar.

The concert began with a rendition of the Mohana raga varna “Ninu kori.” Varnams are traditionally played at the beginning of a vocal concert as they are full of vowels in order to allow the vocalist to open his voice. This tradition is preserved in Carnatic instrumental concerts as well. While this particular varnam is one of the first taught to beginners, Raman’s rendition was mesmerizing and certainly served as imaginative motivation for both students and experts in the audience alike. The concert also included rarely heard compositions of two famous composers, Swati Tirunal and Syama Sastry. In the Bilahari ragam, the performers once again delivered a stunning set of improvisations and embellishments which would have certainly moved even Swati Tirunal, had the 19th century composer been a member of the audience. One of the finest parts of the three-hour performance was the Ragam, Tanam, Pallavi sequence where the performers spent more than twenty minutes improvising in various ragams, including a brief sojourn in Sahana ragam at the request of a particularly delighted audience member (the writer)!

One of the highlights of the concert was the performance of Mysore V. Srikanth on the violin. In his approximately 15 years as a professional violinist, Srikanth has accompanied some of the greatest modern Carnatic musicians. His three–hour performance on Sunday made obvious that his talents and extraordinary range on the violin justify him being mentioned as one of the world’s finest contemporary Carnatic violinists. Certainly a solo U.S. tour by Srikanth is now warranted and would delight Indian classical music fans. Poovalur Sriji has a well-earned reputation as one of Carnatic music’s finest percussionists. Among his long list of accolades is a Grammy nomination. His masterful delivery on Sunday was certainly Grammy-worthy.

Three hours seemed too short once the concert was over and left the audience eagerly anticipating the next time V. K. Raman, Mysore V. Srikanth, and Poovalur Sriji make a stop in Atlanta.