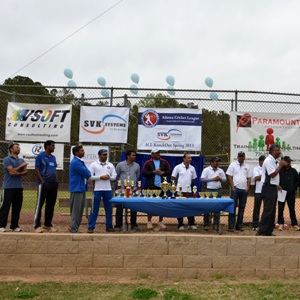 For hard ball tennis cricket enthusiasts in Atlanta and its suburbs there is no dearth of live cricket action. East Roswell Park was the venue of this year’s curtain-raiser events. Atlanta Cricket League (ACL) 2013 season started with a bang with the SVK Systems ACL Knock Out Spring 2013 Finals and the inauguration of the Paramount Software ACL 2013 League Championships.

The Championship will be played over 6 months, with 76 participating teams in the nine-a-side hard ball tennis cricket. The ACL League tournament has become the bedrock of Atlanta summers and an obsession for the diaspora of cricketing nations. 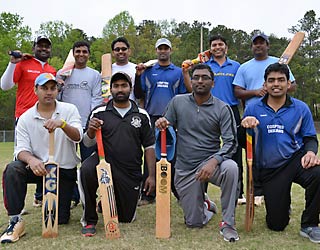 The Finals were followed by a slug-fest as the big-hitters of Atlanta Cricket League competed in the SVK Systems ACL Super Striker 2013 tourney. Competing with both man (bowlers) and machine, it rained sixes and fours as 10 finalists hit the ball all around the park.

In the final face-off, Abhijit Katragadda of Corpteq Indians got the better of Sanjeev Kotha of RapidIT Royals, to be crowned the SVK Systems ACL 2013 Super Striker.

Anj Balusu, President of ACL, said “This is the first time the ACL has conducted the Super Striker tournament and we are very encouraged with the participation and competition.” He also congratulated Sanjay Narla, Vice President of ACL and Lead coordinator of the tournaments, on the successful completion.

The day culminated with Guest of Honor Mr. Pramod Sajja, CEO of Paramount Software, the Title Sponsor of the ACL 2013 League Championships, officially inaugurating the 15 over a side main league season. “With 28 teams comprising the ACL Premier League and 48 teams comprising the ACL Star League, this is the biggest annual cricketing event hosted in the city of Atlanta, and we are proud to be the title sponsor for the second year”, Mr. Sajja noted.