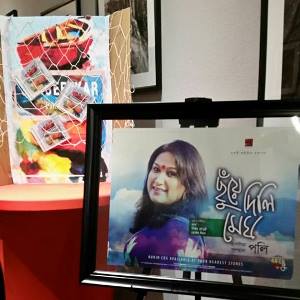 On Saturday, July 15, 2017 an audience of 150 Bangladeshi-, Indian-, Afghan-, and mainstream Americans gathered at a unique program with two separate CD releases and presentation of three Lifetime Appreciation Awards. Bangla Dhara, a Bangladeshi organization that promotes traditional Bangla culture including musical events, poetry recitation, and literary gatherings amongst local Atlanta artists and connoisseurs of such arts, organized the event at the Harvest Hall auditorium in Marietta. 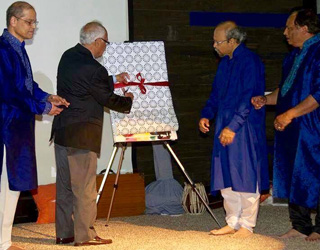 The first part of the program was for the CD release ceremonies. Sangeetkar, one of the oldest instrumental groups in Atlanta, performing Indian classical and folk music for over 35 years, showed a video of their journey from 1982 to 2017, and then performed live. Tabla player Dr. Shekhar Pendalwar read his poem in memory of an original band member, late Rafi Akbarzada, the Afghani rabab and tabla player to whom their second CD album, Pardesi II, was dedicated.

The evening’s next CD release event was for Taslima Sultana Polly, a well-known singer and Nazrulgeeti artist on radio and television from Bangladesh, who has been an Atlanta resident for fifteen years. Chuye Dili Megh (You Touch the Clouds) is her CD of modern Bengali songs. 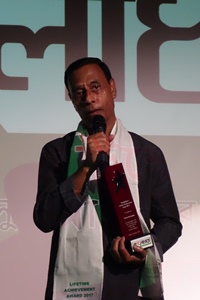 Three individuals were then recognized for their significant contributions to Bengali culture in Atlanta. Lifetime Achievement Awards were presented

to Golam Mohiuddin (right), a Nazrulgeeti and Bangla folk song singer and 1970s radio artist from Bangladesh who has tirelessly helped organizing events for the Bangladeshi community for over three decades, including three FOBANA conferences;

to Musharatul Huq Akmal (above right), sitarist, actor, and poet who has also contributed significantly to the Bangladeshi community as an executive officer in the Bangladesh Association of Georgia; and

to Amitava Sen (above, second from right) violinist, actor, and organizer of events over several years for Pujari and for Sangeetkar, the group he founded with Akmal and Rafi. It is noteworthy that Bangla Dhara chose to recognize an Indian Bengali as well as two Bangladeshi Bengalis for these lifetime achievement awards for contributions to Bengali culture in Atlanta. 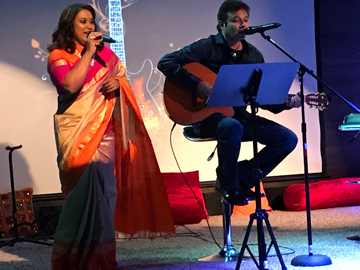 In the last part of this evening, there were performances by Sadrul Amin and his band; and Taslima Sultana Polly and Rommel Khan. The entire event was conducted by Rumi Kabir, Shamsul Alam, and Mahbubur Bhuiyan, and emceed by Rizvan Hridoy and Selina Molly.