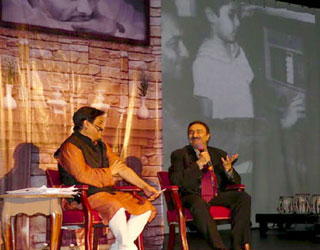 “I have always believed that melody is the soul of a song and a simple tune typically Indian in form, with melody as its predominant feature always reaches deep into the hearts of the listeners.” – Madan Mohan

Madan Mohan’s eldest son, Sanjeev Kohli (Director of Yashraj Studios), was guest presenter. In an interview, Sanjeev noted that Atlanta was the finale in a series of concerts after Chicago and Houston. The multimedia show was conceptualized by Madan Kulkarni and scripted by Dr. Sameer Kulkarni. Sanjeev was glad to return to Atlanta’s receptive music lovers after his previous tour here in 1998 with Lata Mangeshkar and Waheeda Rehman. Sanjeev explained that he was only 18 when his father passed away and too young to realize his redoubtable talent. It is ironic that the industry realized his worth when he was suddenly gone at the age of 51. His fans have multiplied in large numbers. Events and concerts are held in his memory. He is mentioned among the greatest composers of India, and will now remain in people’s hearts through his music.

Theater personality and anchor Salim Arif narrated the show live. One singer, Mahalakshmi Iyer, had sung on the Academy Award winning song “Jai Ho” for Slumdog Millionaire as well as in other films, serials, jingles, and original albums. Another singer, Vibhavari Joshi from Pune, who sings in Marathi and Tamil, had sung the “Saiba” song in Guzaarish. The male lead singer Hrishikesh Ranade was in the Marathi film industry, and had won Idea Sa Re Ga Ma Pa Maharashtracha Ajacha Awaaj Award. These talented singers were supported by a live orchestra: Vikram Bhat on tabla, Abhijit Bhade on rhythm machine, Prasad Gondkar on sitar, and Kedar Paranjape and Darshana Jog on keyboards.

Madan Mohan was born in Baghdad in June 1924.When he was five, his family moved to Chakwal in Punjab, and after six years the family shifted to Mumbai. He was attracted to music as his mother was a poet who admired music. A short stint in the army helped him develop courtesy, endurance, discipline, physical fitness, and punctuality. Then he joined All India Radio, Lucknow, where he interacted with luminaries of classical music such as Talat Mahmood and Begum Akhtar. He returned to Mumbai, and through the film Ada (1951), forged a bond of heart and soul with Lata Mangeshkar. She called him Madan Bhaiya and sang in most of his films. He had no formal training in music but had a keen and sensitive ear for the nuances of Indian classical tunes. He was also proficient in harmonium and piano. He could have been an actor, but S. D. Burman advised him to be a music composer. In 1953, he married and the couple were blessed with a daughter and two sons.

Sanjeev in stirring remarks shared that in the early seventies, Madan ji had difficulty in finding assignments as technology was changing and studios were not available. He felt that he was irrelevant, unsuccessful, and unappreciated, despite winning the National Film Award for Dastak in 1971. Success was measured in big banner films; big stars like Raj Kapoor, Dev Anand, Dilip Kumar; noted directors; number one song in the program Binaca Geet Mala; songs playing on loudspeakers; films with Golden Jubilees, etc. Madan ji had few of these, so he felt depressed, drank, and sadly passed away at the age of 51.

Ironically, after his death, wonderful things happened. “What did he know?” Sanjeev exclaimed. “Mausam (1975) had a silver jubilee; Laila Majnu (1976) had a Golden Jubilee, and one of its songs “Koi pathar se na mare” was number one on Binaca Geet Mala for 19 weeks. And what did he know above all, that forty years after his passing away, Atlanta’s music lovers would be paying glorious homage to him? If this is not success, then what is?” he asked to resounding applause.

After the interval Sanjeev recounted anecdotes and personal memories of his father. Madan ji loved to cook, for example, and would shop for fresh vegetables, meat, and spices, come home, cook, and invite his friends to join him and enjoy his culinary creations. 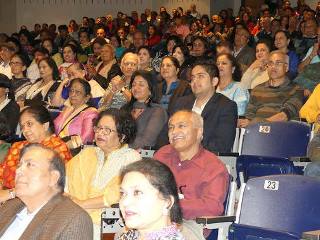 The audience listened raptly as Sanjeev and his son Akshay shared how they worked together to fulfill a dream when they recreated and presented the unreleased music of Madan ji for the movie Veer Zaara (2004), which won various awards and perpetuated his memory. Billboard Magazine acknowledged this as an unprecedented feat.

This top notch show gave a panoramic breadth of the eventful journey of a music virtuoso, and ended to a standing ovation. 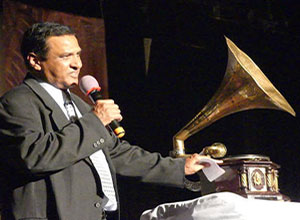