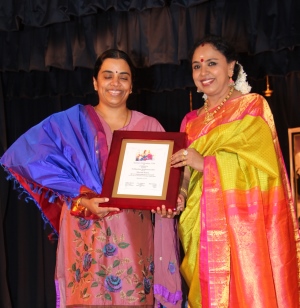 On Labor Day weekend the Hindu Temple of Atlanta auditorium was filled with music lovers. The Sankara Nethralaya Om Trust, a nonprofit eye institution in India, and the Carnatic Music Association of Georgia (CAMAGA) were hosting a three-day event to celebrate the birth centenary of legendary musician, Smt. M. S. Subbulakshmi.

Smt. M. S. Subbulakshmi (1916-2004), popularly known as M.S., was the most prominent cultural ambassador of India. Born on September 16 in the Southern city of Madurai, she was trained in both vocal music and veena. Starting her music career at the age of eleven, she became the most accomplished Carnatic musician, admired for her mellifluous voice and for the bhava or piety that she brought forth when singing. She believed that bhakthi or devotion is the sole purpose of music and that music should guide us to rise towards the pure spirit that permeates the universe. M. S. was loved for both her talents and her humility. As Prime Minister Jawaharlal Nehru said to her, “You are the queen; I am just a minister.”

Her awards and recognition are unparalleled. She was the first Indian musician invited to perform at the UN General Assembly. She performed at Carnegie Hall, New York; Royal Albert Hall, London; and Festival of India, Moscow. She was the first musician awarded the Bharat Ratna (Jewel of India), India's highest civilian honor; the first Indian musician to receive the Ramon Magsaysay award (the “Asian Nobel Prize”); Sangeetha Kalanidhi (Treasure of the Arts) from the Music Academy, and the Indira Gandhi award for National Integration, to name a few.

M. S. was admired even more for her philanthropy. She earned millions from her concerts and royalties and donated most of the money to building hospitals and schools and helping the poor and destitute. The royalties from her most popular recording, Sri Venkateswara Suprabhatam, is donated in its entirety to charity. Thus it is fitting that a charitable organization honored her on her birth centenary with fundraising for free eye care and surgery for the poor in India. Through the “Sahasra Namam-Sahasra Nayanam” project, the organization aims to provide 1,000 free cataract surgeries in honor of M.S., who gave the world the Vishnu Sahasra Namam in a musical form which is part of the worship in most South Indian temples and households.

The auditorium walls were decorated by Smt. Jagatha Govind and her team with pictures of M.S. and posters. On the first day, September 3, Dr. Seshu Sarma, VP of Sankara Nethralaya US, described the contributions of Sankara Nethralaya: medical research and education, and especially Mobile Eye Surgical Units which go to villages to provide free eye care, prescription glasses, and cataract surgeries.

Dr. Pulipaka B. Rao, President of HTA, welcomed all, and Chief Guest Mr. R. Srinivasan, Consul, spoke admiringly of M. S. and how she made Indians proud. The most touching speech was given by ten-year-old Raveena Allie, who was born with congenital anophthalmus, i.e. without eyes. She was given up as a baby for adoption and moved to the U.S. with her new parents. The young Raveena showed the audience that if one is determined, nothing in life is insurmountable. An honor student with many extracurricular activities, she would make any parent proud. The audience gave her a standing ovation for her rousing message and indomitable spirit.

The main event of the day was the Carnatic music concert by the Sangeetha Kalanidhi and Padma Bhushan artist, Smt. Sudha Ragunathan, accompanied by Rajeev Mukundan on violin, Tiruvarur Vaidyanathan on mridangam, and Mr. Raman on the morsing (Jew's Harp). Singing many of the songs that M. S. had popularized, Mrs. Sudha enthralled the audience, who had even more song requests after three hours.

Dr. Sriram then announced that Sankar Nethralaya OM Trust would be honoring a musician from Atlanta with a “Bharat Ratna M. S. Subbulakshmi Award” for years of contribution to Indian classical music. He shared the stringent criteria used to select the most accomplished musician of the community, and announced the recipient: Smt. Subhashini Krishnamurthy—musician, composer, vocalist, teacher, and veena player (an interview highlighting her accomplishment is in the September 2016 issue of Khabar). Mrs. Subhashini was presented with a plaque and a silk saree of “M.S. blue,” similar to the color popularized by Smt. M. S. Subbulakshmi (see photo at top of report). Smt. Sudha Ragunathan spoke about the winners and participated in giving their awards.

The second day had instrumental and group performances by about 100 children and adults, on compositions made popular by M. S. On the last day, a one-hour video presentation on the life of M. S. was shown, specially made by dramatist and director, Syam Yellamraju. Group singing of the compositions of the 15th century composer, Sri Annamacharya, popularized by M. S., followed, by music teachers and musicians. It was a fitting tribute to the memory of Smt. M. S. Subbulakshmi.

Dr. Seshu Sarma thanked all, including two other trustees of SN OM Trust, Moorthy Rekapalli and Bala Indurti, and announced the total donation to be $110,000. 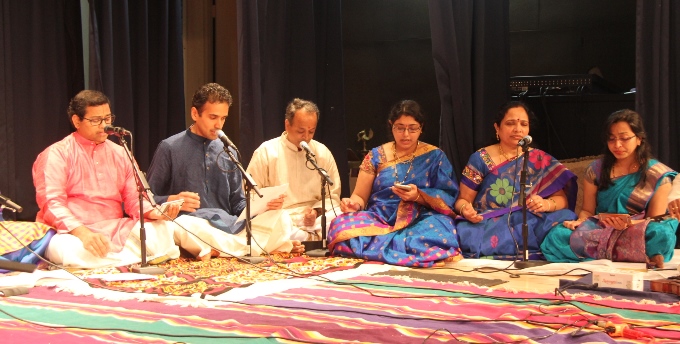 Some of the teachers performing. (Photo: Ravi Penumarthy)