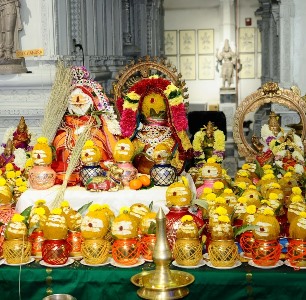 Mahashivaratri is celebrated according to the lunar calendar, so the dates vary every year. It is celebrated on the 13th night and the 14th day of the Hindu calendar’s Phalguna month, generally between February and March. In the United States, Mahashivaratri 2019 was Monday, March 4 and extended till March 5, as celebrations continue until late night and devout people observe a fast for the entire day. It is believed that the planetary positions on this night are such that there is a powerful natural upsurge of energy in the human system, enormously beneficial for one’s physical and spiritual wellbeing.

The Hindu Temple of Atlanta (HTA), Riverdale, celebrated this much awaited festival for two days in South Indian style on Saturday and Monday in the Siva temple dedicated to Sri Rama Lingeswara and His consort Parvata Vardhini. From early morning on Monday and continuing through the night, many rituals were performed as prescribed in the scriptures. Finally, Lingodbhava Kubera Paasupatha Abhishekam was held at midnight in hopes of wealth bestowed by Siva.

HTA’s president Sheela Lingam said that 3,000 plus devotees visited the temple on Mahashivaratri, more than had been expected, packing the parking and dining areas. Since it was on Monday this year, it was very auspicious for worship of Lord Siva. Long lines of devotees patiently waited for their turn for abhishek, offering milk to the Siva lingam. Traditional/classical dances and bhajans depicting Lord Siva and Parvati stories were excellent, with performances by local classical dancers. The wedding of Sri RamaLingeswara and Parvata Vardhini was depicted with all traditional rituals.

One performer said, “We are extremely blessed to perform in front of Siva.” Monika, a student from a local university, said “Mahashivaratri is always special because I am a dance student. I always celebrate Maha Sivaratri in my dance school. At home back in India we celebrate a lot. Coming to Atlanta and studying alone, it is just a wonderful experience to come to this temple and celebrate Mahashivaratri festival with a wonderful community.”

Aditya Jaganathan, a software professional and a temple volunteer said, “I am volunteering in the temple for over seven years now. We enjoy doing the service. Mahashivaratri is so special, because the way the priests do pujas here you cannot find anywhere in United States.” Celebrations at HTA concluded in the early hours of March 5 with the customary mantra Pushpam, Mangala arati and distribution of mahaprasadam to the assembled devotees. 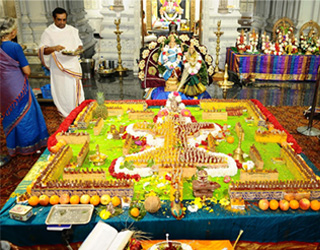