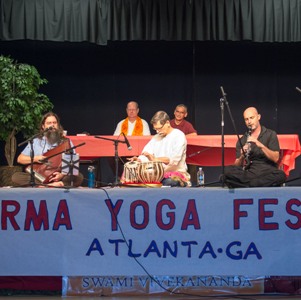 “Each soul is potentially divine. The goal is to manifest this divinity within by controlling nature, external and internal. Do this either by work or worship or psychic control, or philosophy—by one, or more, or all of these—and be free,” said Swami Vivekananda. These words of Swami ji reverberated once again during the Dharma and Yoga Fest held on August 31st 2013 in Atlanta.

Hindu Swayamsevak Sangh (HSS)—a socio-cultural organization that aims to unite the Hindu community in order to preserve, practice, protect, and promote Hindu ideals and values—has been organizing events throughout the year to commemorate the 150th birth year of Swami Vivekananda. This Dharma and Yoga Fest was the culminating event of this year-long celebration. More than 100 Atlanta-based HSS members had been working for the past 6 months to make this event possible.

This unique day-long festival started with a beautiful puja by children to Lord Ganesh, remover of obstacles, followed by opening remarks by Swamini Swatmavidyananda of Arsha Vidya Gurukulam. Next on the agenda were parallel sessions of Raja and Jnana Yoga, followed by Bhakti and Karma Yoga.

Jnana Yoga is the science of intellectual inquiry into the truth. Several eminent speakers such as the Swamini; Brother Sankara, a disciple of Swami Prabhavananda; Sri Nandanandana Das, the international president of Vedic Friends Association; and Acharya Raghu spoke to bring out the essence of Jnana yoga, the what, how, and why aspects.
The Raja Yoga track saw practical demonstrations of yoga asanas as part of Ashtanga Yoga vidya by several yoga organizations such as Hath Yoga (Sudhanva Char), Sahaj Marg (Aditya Gangadharan), Isha Foundation (Radhika Rao), and Art of Living (Laxmi Jagath).
In the Bhakti Yoga track, Sri Balabhadra Das, the director of Vedic Friends Association, started off the track with an enlightening speech on the essence of Bhakti yoga—devotion and unconditional love towards God. Soul-stirring bhajans and chants were rendered by the Blue Spirit Wheel, sounds of ISHA and ISKCON groups taking the audience on a beautiful spiritual journey. Inspiring stories leading into the bhajans were told by Sri Nandanandana Das and Dr. Ravi Sharma, former president of the Hindu Temple of Atlanta.
The Karma Yoga session focused on a panel discussion about Karma—inspired work. The panel included Brother Sankara, Sri Malla Reddy, and Smt. Manjula Reddy. Several organizations had set up booths as part of this track. Concluding remarks were given by Sri Brahm Agarwal.

This beautiful celebration ended with a creative dance-drama,Sri Krishna Leela, performed by 90+ children and adults. This enactment of some of the glorious stories of Lord Krishna’s childhood and Swami Vivekananda’s interpretation of the Bhagvad Gita message delivered by Lord Krishna to Arjuna was well-received by the audience.

An exhibition of rare pictures and posters of Swami Vivekananda’s teachings and events in his life was shown during the event.

A number of Atlanta-based organizations such as the Shakti Mandir, Gujarati Samaj, and Sant Nirankari Mission helped in organizing this grand fest. Others such as Sewa International, Ekal Vidyalaya, Fulton County Health Promotion, VHPA, AOL, Chinmaya Mission, Shiv Mandir, Amma Foundation, VFA, Sai Mandir, Sacred Cows Sanctuary, and Hindu Temple of Atlanta participated by setting up informational booths. Each one remarked on the high quality and punctuality, including the heads of the Sardar Patel Bhavan, from whom the hall was rented.

All in all, the 600+ audience had a unique opportunity to walk down the lanes of history, learn something new about Swami Vivekananda, and experience the essence of the four-fold Yoga and its application to their everyday lives.