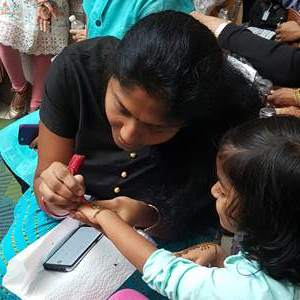 (Left) Macy's customers enjoyed the mehendi stations set up in the store.

For the first time at Macy’s:
In their first department store event in America, the Macy’s in North Point Mall, Alpharetta, Georgia, celebrated Deepavali on Sunday, November 4, 2018, from 1-5pm, in the Cosmetics and Jewelry Departments on Level 1, in partnership with ASB Communications, honoring the beauty of the holiday and the traditions celebrated across many communities during this special time of year. Deepavali or Diwali is the Festival of Lights that marks the victory of light over darkness, knowledge over ignorance, and good over evil.

The celebration began with the lighting of the diya (lamp) with Macy's team and dignitaries, followed by regional dance performances by the Kalaxya Institute of Performing Arts (KIPA). KIPA Director Mital Patel and her students presented the classical dance of Kathak (with storytelling through dance) and an entertaining Bollywood medley, as well as an upbeat folk dance of garba.

Then around 20 beauty pageant winners from two pageants paraded, organized by IACA and Dreamgirl Entertainment LLC with Kamlesh Chugh. 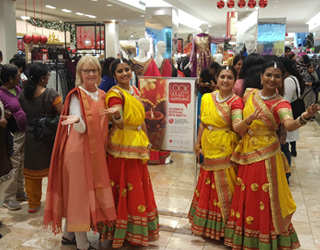 (Left) Under the Christmas decorations were Indian cultural displays, Deepavali jewelry to buy, and more.

Customers also enjoyed the opportunity to shop from exquisite gifting stations with specially-curated Deepavali jewelry, utensils, and accessories—it is believed that buying gold, silver, and utensils on Dhanteras, two days before Deepavali, brings good luck to every member of the family.

Macy’s North Point VP Sheila Wilson, dressed in black salwar kameez and tikka, declared that she was enthused to see hundreds of people from diverse background and ethnicities, including support from the Indian community. This had all started with wanting to recognize some of the Indian employees and do something Indian for them. The employees then came up with the idea of organizing a Deepavali festival, and the Diversity and Inclusion program of Macy’s joined in. Collaborating with ABS Communications took the event to this level, she added. They chose Deepavali since it is celebrated widely in India and by Indians around the world, and yet there is diversity in the way it is celebrated in different regions; thus it is inclusive and diverse at the same time.

VP Diversity and Inclusion Strategies Jose Gamio is now looking forward to implementing a similar program at Macy’s countrywide. When asked if he saw this opening doors for carrying Indian clothes and jewelry in future at Macy’s, he replied, “Yes, this was a test market; it could also lead to that possibility.”

Some Atlanta Indian-Americans have seen the community grow from a few Indian families to many, from being excited to see an Indian face in a mall to now seeing a popular mall store celebrating Indian culture. The joy of witnessing this day was indeed reflected on many faces as they were there to support this initiative, the first of its kind in the country.

Be sure to see Kalaxya's other outreach efforts at http://www.khabar.com/magazine/around-town/kalaxya-and-dhoop-chaoon-reach-out-to-the-mainstream