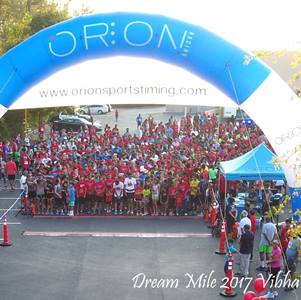 The Dream Mile was efficiently organized by the volunteers of Vibha Atlanta with 300 Volunteers on the field on September 23, 2017, divided into various teams like Registration Team, Course Monitoring Team, Food Team, T-shirts Team, Race Start and Finish, Publicity and Sponsorships. The relentless efforts put in by all the volunteers resulted in an easy flow of the event. The warm up session was conducted by the high-powered team of Jazzercise and soon the 10K, 5K and 1K walkers and runners made their strides towards the course with the cause close to their hearts.

Started in 1998 in Georgia Tech, and brought to the northern suburbs of Atlanta six years ago, the Vibha Dream Mile, with its 5K Run declared as one of the qualifier race for the Peachtree Road race, is quickly becoming one of the top ten races in Atlanta. Many corporate teams participated in the event with their teams.

Every year the Dream creates a buzz in the town with vogue and fervor along with creativity and innovation by adopting new ways to engage patrons on the social media. With the introduction of 1K Walk to encourage participation from all age groups, and Phantom Runner option for participants to be connected to the event even from other cities the participation increased significantly. A billboard flashed at various parts of the city to create the buzz about event and Facebook fundraising campaigns were flawlessly led by Tripura Vadlamani. The total revenue from registrations, sponsorship and donations reached a record $300,000 this year. 10% of the net proceedings will be given to Children’s Health Care of Atlanta, another 10% will be given to the rehabilitation of Houston by assisting public schools affected by hurricane Harvey. The rest of the proceeds go to child development projects supported by Vibha. For a full list of projects, please visit www.vibha.org/projects. 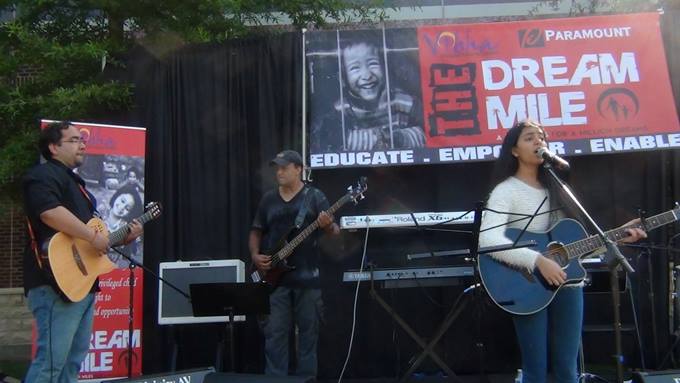 Flash mob has been a tradition from the preceding years but this year’s saw the theme of Child empowerment, reflecting on the cause of Vibha. The Newest and the most exciting addition to the cultural aestheticism was the Musical band presented by Atlanta Music Studio which filled the atmosphere with serenity and delight.

DreamMile is also a time when the spirit of volunteerism is recognized. Sravan Chivukula, who led two big fundraisers of Vibha – Cricket and DreamMile - this year, was awarded the Volunteer of the Year. Shiva Nimmagadda and Venkat Vudithyala received the Star Volunteer awards. Nikita Savant, Sneha Kadiyala and Lalitya Danda were recognized among the Youth volunteers.

Ultimately, leadership is not about glorious crowning acts. It is about keeping your team focused on a goal and motivating them to do their best to achieve it, especially when the stakes are high and the consequences really matter. It is about laying the groundwork for others' success, and then standing back and letting them shine and this reflects the culture in Vibha. Sravan Chivukula and Pravin Chavda stood out as the overall event leads. They thanked all the participants, sponsors, volunteers and their families for their support and dedication towards making this event a huge success !