Eid-ul-Adha, the Festival of Sacrifice 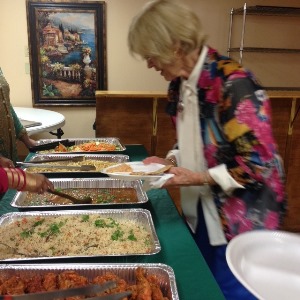 (Left) The Atlanta mainstream community shared in the Ahmadiyya Muslim Community's celebration of Eid-ul-Adha, the Festival of Sacrifice.

“I shall always be ready to sacrifice my life, wealth, time and honor for the sake of my faith, country, and nation.”

This pledge is often repeated by the members of the Ahmadiyya Muslim Community in the USA. The congregants start every meeting with this pledge and so when the Eid-ul-Adha rolled around on October 5, “sacrifice” was the topic on everybody’s mind. Eid-ul-Adha, the Festival of Sacrifice is celebrated when Muslims around the world slaughter animals to commemorate the sacrifice by Abraham (Peace be upon him) of his son Ishmael according to God’s commandment. However, God in His infinite mercy accepted this willing sacrifice and rewarded him for obedience by asking him to slaughter an animal instead. The Atlanta Chapter of Ahmadiyya Muslim Community had made special arrangements at Pleasant Hill Events Hall for Eid Prayers, as the local mosque had become inadequate for the growing congregation. People came to the Hall in their festive Eid clothes and girls looked especially colorful with beautiful outfits and henna on their hands.


The Eid sermon delivered by the President of the Georgia chapter Hazeem Pudhiapura reiterated the spirit of sacrifice that Abraham (PBUH) showed when God asked him to leave his infant son and wife in the desert at what is now the site of Ka’aba but was a barren uninhabited land at that time. Mr. Pudhiapura drew comparison to the spirit of sacrifice in the Georgia congregation who made possible the recent purchase of the future mosque which will provide an adequate space for the congregants. The plight of the marginalized Ahmadiyya Muslim Community in Pakistan was also alluded to since most of the people present have family members who live under the oppressive anti-Ahmadiyya laws in Pakistan and were unable to celebrate Eid as openly as thereir relatives living in the USA.


The sermon drew attention towards the fact that sacrificing monetarily is not enough and the need for prayer is still there. He urged everyone to pray that God may make this space (the new mosque) a source of blessing not only for the local congregation but the larger community as well. The end of the sermon was marked with a silent prayer and then food was served to the guests and the congregation. 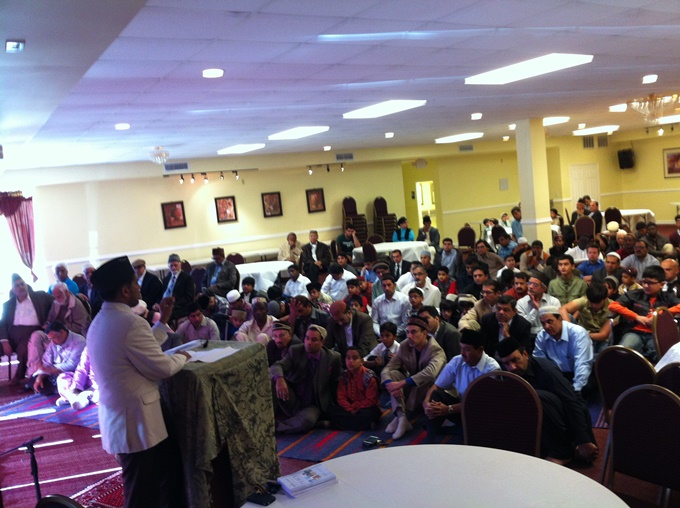 Link:
Religion Departments in universities both study individual religions and compare religions. An upcoming series of nine presentations at Emory University (see http://www.khabar.com/Calendar/) will look at Creation Stories (most of them Hindu, but some other), and one of the programs will be the following, related to the concept of sacrifice:

Emory University: Creation Stories project
In a lecture titled Sacrifice as Creation, Dr. Marko Geslani from Emory's Department of Religion will explore how in late-Vedic understanding, sacrifice was deeply implicated in the process of creation. As the gods receded to the status of mythic patrons, the sacrifice itself achieved its own stunning apotheosis; it was thought to possess an endless re-creative capacity, which could be harnessed both for the ordering and renewal of nature and society, and for the “immortality” of the sacrificer.

The full list of Emory events in this series: