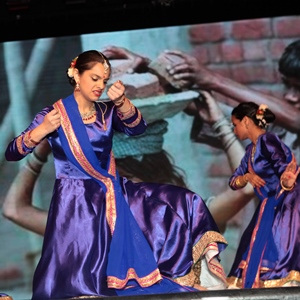 (Left) Samta Savla and others dancing to protest child labor.

Ekal Vidyalaya Foundation organized a scintillating dance and music show, “Sanskriti, A Bollywood Journey,” by Nritya Natya Kala Bharti (NNKB) at the Berkmar High School, on Saturday, December 1, 2018. Ekal is a nonprofit working since 1986 in neglected rural and tribal areas of India to eradicate illiteracy. Its innovative, single-teacher schools empower by providing free basic education, healthcare, and vocational training to over 1.8 million children, through over 77,000 schools. Ekal’s goal is to support 100,000 villages by 2020.

NNKB enthralled the audience from “Ganesh Vandana” to the showstopper Ghoomar dance, all directed by Kumud and Sandeep Savla. The show was emceed by their daughter Samta Savla, a proficient Kathak dancer.

Bollywood male singer Salil Bhadekar presented an engaging and well-chosen mix of songs, including some from latest Bollywood movies (London Thumakda), and some vintage items from early 70s (e.g. “Chup gaye sare nazaare”). The show’s delicious piece was his jugalbandi with the female Bollywood singer Ms. Laboni. They had an instant rapport with the audience, who cheered, some energetic ones joining them on stage to dance to “Om Shanti Om”and “Jai Jai Shiv Shankar” songs. Salil’s impressive energy and melodious voice endeared him to the audience in no time. Ms. Laboni, in a bright orange sari lent extra glow to the stage. The rousing “Dama dum mast kalandar” had all clapping with joy and enthusiasm.

(Left) Samta Savla and others dancing to protest child labor.

The show’s special and new standout “Breathless” performance was a Kathak-blended-with-jazz dance on Hariharan’s “Breathless” song. That duet’s spellbinding performance was a real treat for the eyes and ears. Strategically placed floor microphones augmented the pleasure of listening to the ghungroos, hand claps, and rhythmic thumps of the dancers in the hypnotic jazz dance. The harmony of the melody, beats, and expressive use of the eyes was awesome. Kumud Savla’s imaginative conceptualization and direction was admired in this masterpiece choreographed by her especially to reflect the Ekal mission of empowering women, eliminating child slavery, and supporting literacy for underserved kids. The auditorium reverberated to the rousing applause of the audience after each performance.

A delicious full course dinner followed. This event had the highest number of schools sponsored so far in Ekal history, despite the smallest number (250) of audience. A whopping $89,000 was raised. It included the generous donation of $25,000 from 27th Investments, and matching 30 schools donation by Crawford Company CEO Agadi, and 169 schools funded by the audience, NNKB, and Ekal volunteers.

More on Ekal:
Ekal, a 501(c) (3) tax-exempt non-profit entity has been working since 1986 in neglected rural and tribal areas to eradicate illiteracy. It operates and supports innovative, single teacher nonformal schools for underserved communities, empowering them by providing free basic education, healthcare, and vocational training. With support from 42 United States’ chapters and others in Australia, Canada, Dubai, New Zealand, United Kingdom, and Nepal, Ekal is impacting the lives of over 1.8 million children, an almost equal number of boys and girls, through 77,458 schools ( as of July 2018) operating successfully from Kashmir to Kerala in India. Ekal’s goal is to support 100,000 villages by 2020.

More on NNKB:
NNKB is the Southeast’s largest Indian dance and music Academy. NNKB Founder/Director. Kumud Savla is an internationally recognized artist, who has performed across the globe with world renowned artists such as great tabla maestro Zakir Hussain. She has been honored by the Government of India for her international dance workshops and performances in the Festivals of India events . She has been teaching Kathak classical dance for over 20 years. Her husband and NNKB’s Co-Director Sandeep Savla, is an accomplished composer, and musician. Their daughter Samta Savla, who is a proficient Kathak dancer, who has had the honor of performing at the Indian Consulate of Atlanta, Cirque du Soleil, and the World of Coca-Cola inauguration ceremonies.

Thanks:
Ekal Atlanta thanks NNKB and hopes to work with them again! Also all Ekal’s Office bearers and volunteers team, who worked tirelessly to coordinate the Dec 1 event. Heartfelt Thanks to Kusum Khurana team for efficiently serving dinner, to VHPA organization as always for sponsoring the chai break, Preeti Tanwar for emceeing the program and to keep the audience entertained and informed of the schools sponsorships along with Neetu Chauhan, Rachna Gupta to share Ekal overview and facts,to volunteer Pavan Chinthakindi who ensured that all singers artists arrived on time and Ekal’s young volunteer Samiksha Gaherwar for reflecting youth perspective for the Ekal drive. Special thanks to esteemed dignitaries who graced the occasion by attending and also lighting the lamp. Deep thanks to the Crawford CEO Harsha Agadi who matched 30 schools, which really fired up remaining donors at the event and helped in going over the 100 schools goal mark! Such successful events wouldn’t be possible without the Advisory support from Shiv Aggarwal ji, Sant Khanna ji & Satish Damle ji among others.
And special thanks to all the audience who braved the heavy rains and contributed to the noble cause.

For details or for Ekal School’s progress, please visit www.ekal.org and join the Ekal movement to change the lives of millions of children in remotest areas of India by donating just $1 a day, $365 for the whole year.