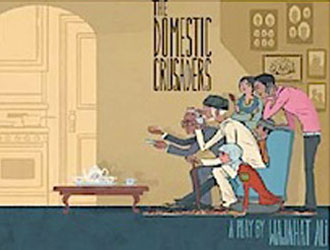 American popular culture—the art that surrounds us every day—represents the community’s hopes and desires, and so is tied to politics, social cohesion, healing, etc. It reflects the tremendous cultural diversity of the American people, and helps to shape the way Americans understand themselves. Perhaps the least understood of these influences is the cultural impact of the various Muslim communities that have settled in the United States. It might be surprising to learn that for the past 500 years, the tapestry of influences that converge in popular music, architecture, and literature—the arts we engage with every day—bears witness to the presence of Muslims in America.

On February 13, 2011, Dr. Hussein Rashid gave a free public talk at Emory University’s Carlos Museum, which espouses learning through art. Dr. Rashid, visiting professor at Virginia Theological Seminary, is an instructor at one of the largest interfaith centers in Manhattan, housed at the Park Avenue Christian Church. He is also an Associate Editor at Religion Dispatches, and has appeared on CBS Evening News, CNN, Russia Today, Channel 4 (UK), and State of Belief—Air America Radio. This program was sponsored by His Highness Prince Aga Khan Shia Imami Ismaili Council for the Southeastern United States.

In 1492, Columbus sailed from Spain, and only a few years later Muslims began arriving in the New World: some perhaps from the exodus of the Spanish Inquisition, and others from Africa in the slave trade. The following are examples given by Dr. Rashid of Muslim art in American culture.

Architecture: We find, built by non-Muslims but based on artistic appreciation by all, churches such as the Sacred Heart Catholic Church of Galveston, Texas; New York City’s Central Synagogue in the Moorish style popular for synagogues of the late 1800s; and on American architect Minoru Yamasaki’s Twin Towers of NYC, both Islamic pointed arches and a courtyard that mimicked Mecca's assemblage of holy sites—and of course, Atlanta’s own Moorish “Fabulous Fox” theater.

Images: Shazia Sikander’s modern political art, based on the form of a Persian miniature, “Many Faces of Islam” presents a complex engagement with the Muslim world. Willow Wilson’s novel Cairo, put out by a comic book company, is positive. Comic book series The 99 by a Kuwaiti psychologist presents each of the 99 superheroes as based on one of the 99 attributes of Allah, but is meant to appeal to all children: the ethical characters come from a variety of countries and have different physical characteristics. TV channel “The Hub” will soon have an animated version of this series, and the 99 will also appear in a series alongside Superman, Batman, and Wonder Woman. Another female comic book character, Dust, is from Afghanistan, written by non-Muslims but as a nuanced character, human rather than stereotypical.

Literary Art (words without images): Non-Muslims such as Ralph Waldo Emerson and Toni Morrison have engaged deeply with the Muslim world. Willow Wilson converted to Islam and in The Butterfly Mosque captures Egyptian politics in the people’s feelings. On a lighter note, the play The Domestic Crusaders follows a 3-generation Pakistani-American family.

Television: From the comedy “Aliens in America” (with a Pakistani Muslim boy) to episodes of the police drama “NCIS” (Naval Criminal Investigative Service) (with an Israeli woman who worked with Muslims), “Bones” (with an Iranian intern), and “The Simpsons” (with a spoof on “24,” seeing terrorists everywhere), to “Outsourced” Rizwan Manji, and even to the news, we are seeing more and more examples of ordinary, appealing Muslim characters.

Music: The style of West African Qur’an recitation resembles that of slave spirituals, which share similarities with the blues, and on down the progression to rock, R&B, hip hop (e.g., Mos Def beginning songs of social reform with “in the name of God?”), to modern bands like Junoon (Pakistani sufi rock band), Kominas (American Desi punk from various faiths), and into the written word with the novel The Taqwacores (2002, on God-conscious punk music) by Michael Muhammad Knight and the Taqwacore documentary (2009).

With the diversity of Muslims now here, America has been called the “new Mecca.” Our understanding will be influenced as we see more of how Muslims represent themselves in the various popular arts.