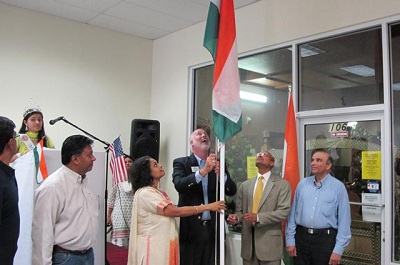 The India American Cultural Association (IACA) organized its 14th annual Festival of India, to celebrate India’s 63rd Independence Day, at the Gwinnett Center on Saturday, August 14, 2010. The theme ‘Engage, Evolve and Entertain’ was begun by carrying a torch and flag to engage our metro Atlanta neighbors to celebrate India’s independence with us. The Festival of India Torch was lit in Johns Creek on July 30 by Mayor Bodker at Ocee Park. It traveled to Global Mall, where mall owner Shiv Aggarwal had invited Mayor of Norcross Bucky Johnson to attend the ceremonies on August 7, and from there went to East Cobb Park on August 8 where County Commissioner, District 1, Helen Goreham was chief guest. The flame was received at the Gwinnett Center on August 14 in a grand finale. At all the stops, it attracted record attendance this year.

Chief guest, Attorney Matt Wilson, challenging Justice David Nahmias for a seat on the Georgia Supreme Court, has degrees from UC-Berkeley and American University in D.C. Mr. Wilson reminded us that “we have the honor and duty as citizens to vote” and of “the importance of the court system, because it is here where our rights are protected, where our government is limited to the constraints of our Constitution and where equal protection under the law is afforded to all citizens.”

Second chief guest, Justice David Nahmias, was named to the Georgia Supreme Court by Governor Sonny Perdue in August 2009. His seat will be up for election in November 2010. A native Georgian, he graduated second in his class at Duke University and magna cum laude from Harvard Law School. Justice Nahmias noted that he is “a child of two immigrants—my father was born in Egypt and my mother was born in Germany. My parents came to Atlanta in 1964?. Georgia’s Supreme Court is very important in the lives of Georgian families and businesses. ?. Please remember that all must respect the rule of law and no one is above the law. It is incredibly important to the American dream. ?. I have always believed in upholding the law and equal justice for all. Let me stress that we do not run on issues but on qualifications.”

IACA President Padma Rallapalli listed IACA’s activities: a census workshop, Republic Day celebrations, spelling bee workshops, an English play “Out of Order” with dinner followed by Holi celebrations, job fair in April, annual IACA scholarship program, annual banquet with recognition of community activists, and beauty pageant. The team is now working on a Health Seminar in September, Classical Day (with classical Indian music) in November and later a Fundraiser for the Sanatan Mandir. Both Sanatan Mandir and India Center (an auditorium and banquet hall to accommodate 700 to 800 people) projects are progressing well. Former publication “Voice of India” has been brought to life, and the IACA website has been revamped.

Chand Akkineni pointed out the Job Fair, new to the Festival, with companies ITJobCafe, Radiumsoft Inc., Lunex Telecom, and Prudential.

Atlanta’s popular Sarvana Bhavan, Royal Indian Cuisine, and Unique Foods International provided refreshments. Despite long queues for food and drinks, booth-renters were happy that the cultural show’s stage was in the same hall as it drew more people to the booths.

The cultural program’s theme, “Evolution of entertainment in India from 2010 BC to 2010 AD,” was apt. The 8-hour program with about 200 participants lasted from 11am to 7pm. Included were a game show “Hamare Hangama,” 4 sessions of 15 minute dance floor for audience participation, a skit of the Putrakameshti scene from Ramayan, patriotic songs, Wonders of India, Bollywood band, bhangra, dandia and other folk dances, Bollywood songs, classical instrumental renditions, and classical dances. Kudos to the Culture Team headed by Krishnaveni Kesavarapu and with Lakshmi Vedala, Vijaya Gandapodi, Nivedita Garabadu and Atlanta’s well known performing arts promoter Syam Yellamraju.

A health fair, organized by GAPI President, Dr.Sreeni Gangasani, and SAI Health Fair’s Founder, Dr.Sujatha Reddy, saw over 250 people benefit from the services of 30 physicians representing 18 specialties, nine nurses, and over 50 health care workers and volunteers. Dr.Gangasani noted that GAPI is working on establishing a clinic for the uninsured: “In these tough economic times, I want people to utilize these opportunities to maintain a healthy life.”