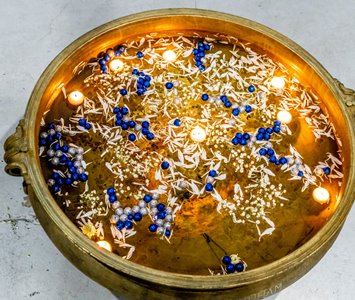 Hanukkah was celebrated in the Indian Jewish tradition at the Indian consulate in Metro Atlanta on Sunday, December 15, 2019. Decorations in cool blue and white, the traditional Jewish colors for the holiday, gleamed alongside vibrant colors of Incredible India posters in the room.

The evening began with a warm welcome to the dignitaries, members of the American Jewish Committee (AJC), Indian Americans, and friends, by emcee Consul Asim Kumar (Head of Chancery, Protocol, Security). He compared Hanukkah, the Jewish festival of lights that celebrates victory over oppression and tyranny, to Diwali, the Indian festival of lights that celebrates victory of light over darkness. The consulate would soon also celebrate Christmas, another festival of Light, he said, by decorating a Christmas tree at the Atlanta airport. He noted other celebrations and wished everyone “Hanukkah Sameach!”

(Left) The menorah is displayed.

Dr. Kulkarni’s warm smile expressed her happiness in celebrating Hanukkah with a packed hall. She spoke of the many lessons of Hanukkah: dedication, perseverance, that a small group can make a big difference, that when resources are limited it is faith that makes miracles happen, and that freedom is the most meaningful miracle. She noted how much Jews have contributed to the world and how the menorah is proudly displayed. Our festivals have common values, she said, and foster communal bonding, social bonding, and peace.

Jews came to India from King Solomon’s time through trade routes, she said, and settled in coastal India, in Kolkata, Kochi, and Mumbai. They assimilated but kept their traditions alive—thus we have samosas, pakora, and sufganiyot (jelly doughnuts), all traditional fried foods to symbolize the oil that miraculously burned in the Temple in Jerusalem, in the Hanukkah story.

The new Consul General of Israel, Anat Sultan-Dadon, who had taken up her role in the U.S. in July, spoke about the establishment of Indian-Israeli relations in 1993. It is hard to believe, she said, that until then, the Indian passport was valid in all nations except Israel, and today in contrast one can find 5 weekly direct flights between Tel Aviv and New Delhi, packed with businessmen and women, tourists, students, and backpackers. This has also normalized relations between Arab countries as these flights pass over Saudi Arabia and several Arab territories, which until recently would have been impossible. Defense is no longer the only area of trade. India is seeking Israel’s help in the goal of providing good tap water to every Indian household by 2024, for example, and India and Israel are cooperating in space science and technology. As we light the candles in commemoration of the miracle thousands of years ago in Jerusalem, it is fitting, she said, to think of the miracle of our countries’ relations, discovering commonalties and turning differences into advantages and cooperation for the benefit of both our peoples. “Happy Festival of Lights, Happy Hanukkah.”

The new Consul General of Japan, Kazuyuki Takeuchi, the new Consul General of Ireland, Shane Stephens, and others assisted in lighting the candles with CGs Kulkarni and Sultan-Dadon. The invocation was given by Nissim Reuben, AJC’s Assistant Director (Asia). The Israeli consulate and the AJC presented a gift bag to CG Kulkarni.


Dov Wilker, AJC-Atlanta Regional Director, expressed his appreciation of the consulate’s annual Hanukkah event, noting that Atlanta is one the few cities in the U.S. that host such a wonderful celebration. Nowadays there is talk about where Jews are from and why we have antisemitism. One way to fight antisemitism is by showing the diversity of the Jewish community. Indians and Jews both have a diaspora, have a relationship with their homeland, and celebrate traditional holidays. This event helps to combat antisemitism and celebrate diversity. 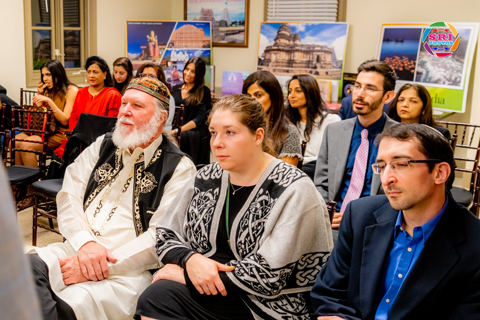 Nissim Reuben, AJC-Washington Assistant Director (Asia), told emotional anecdotes of connections between Jews and India. Dr. Hermann Kallenbach, for example, was a German Jewish architect who gave Gandhi the Tolstoy Farm near Johannesburg where Satyagrahi families were hosted, and where satyagraha began. Upon Gandhi’s return to India, Dr. Abraham Solomon Erulkar, an Indian Jew and personal physician of Gandhi, relocated with him from Mumbai to Ahmedabad in 1915. Mr. Reuben spoke of growing up in Ahmedabad, where his father would remind Jews that “the sun never sets on the British empire” or on the Jewish people. He appreciates India’s welcome to all religions and encourages Jews around the world to coexist with Muslims, just as synagogues are found in peace in Muslim areas in India. Jewish schools in India also have Muslim students. From his experience, he believes that the image of recent India not being a tolerant country should not be supported. To improve international relations, he will work to get lawmakers from the Southeast to join next year in Hanukkah celebrations in D.C. that have been going on since 2002. Finally, he noted that Atlanta is the fastest growing community of both Indians and Jews.

Link:
"How the Indian Jewish community is preserving traditions for the next generation.
While there are only an estimated few hundred Indian Jews in the United States, these community leaders are working to preserve their traditions."
https://www.nbcnews.com/news/asian-america/how-indian-jewish-community-preserving-traditions-next-generation-n827226