First Recital by students of Pandit Jasraj School of Music 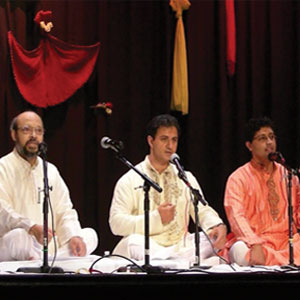 The students of Pandit Jasraj School of Music in Atlanta held their first recital at the Berkmar High School auditorium on Sunday, May 13, 2012. Since its founding in 2001, according to Director Madhu Kongovi, the school has grown to about 90 students, keeping the gurus well occupied in grooming the next generation of Atlanta’s North Indian singers and tabla players. Pritam and Prithwiraj Bhattacharjee have been the faculty since 2004, devoted to their art and to imparting their knowledge of Hindustani music to a rising number of music aficionados and students across many regional Indian-American communities. The student body also includes Americans who are interested in Indian music, such as Jerry Fields, whose group Vecinos del Mundo combines Latin Jazz with Afro-Cuban rhythms. 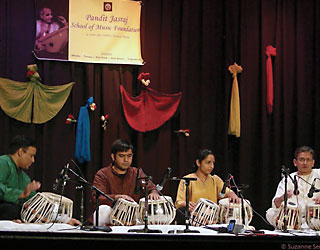 Sunday’s recital was presented by fifteen groups, each comprising three to eight students, who presented various bandishes, some being traditional Mewati gharana, some composed by Pandit Jasraj, and some by Pritam and Prithwiraj Bhattacharjee. Around 75 students performed, ranging in age from under ten to over fifty, most of them for the first time on stage—although a few are veteran Atlanta artists and musicians, even teachers of music themselves, besides being students.

The event was planned and organized by the students and emceed by Gauri Mhaskar and Madhuvanti Deshmukh, who introduced each raga’s and each composition’s salient features.

The final piece was a fusion instrumental number composed by Prithwiraj and performed by students on various musical instruments (alto sax, violin, dholak, frame drum, guitar, keyboard) that they had learnt outside the school (which at present teaches vocal and tabla). 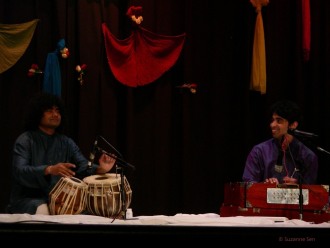 After the students’ recital, the teachers performed a solo piece each on audience request. The evening ended with a delicious vegetarian dinner.