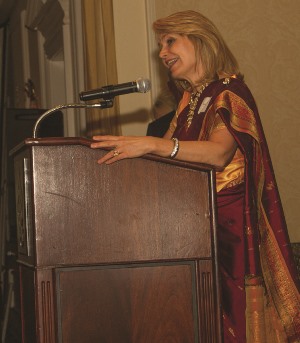 (Left) Becky Douglas, the force behind Rising Star Outreach, has guided her organization to where it now serves 29,000 people affected by leprosy in 54 different colonies in India. (All Photos: Penny Duncan)

On March 11, 2016 a celebration sponsored by Rising Star Outreach was held at the Atlanta Athletic Club. More than 125 people gathered for the Atlanta Comes Together evening. 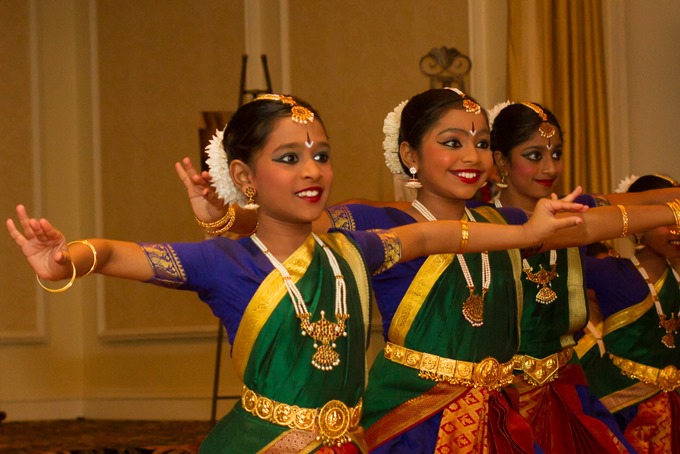 After refreshments, attendees were treated to a beautiful dance program by Bharathakala Natya Academy. Ms. Becky Douglas then gave a presentation on the remarkable growth of Rising Star Outreach.

Rising Star Outreach was started in Atlanta in 2001. Becky had visited Chennai and had been distressed by the plight of the leprosy-affected beggars in the streets, who seemed to be at every stoplight. On she return, she invited four friends to gather around her kitchen table and join with her in creating a program to help. They formed a charity, and Rising Star Outreach was born fifteen years ago.

The home base of the charity moved out West, but in looking over the history of the Atlanta support, Becky was stunned to learn that the good people of Atlanta had raised $1,575,000! And without a single corporate donor! Sot was decided to return to Atlanta this year to hold the annual Board meeting and thank these amazing supporters and share with them what has happened over the past fifteen years. 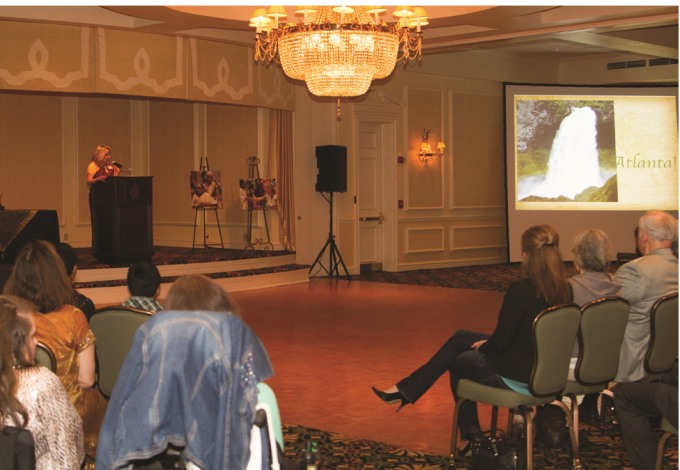 It was an evening of contrasts! In her PowerPoint presentation Becky showed the small rented house in Chennai where their first school started—with one bedroom, where 27 children from the leprosy colonies slept shoulder to shoulder on one mat. Today Rising Star has a beautiful 16-acre campus with English-medium schools that serve UKG (upper kindergarten) through 10th Standards, with 267 children. The secondary school is adding 11th and 12th standards next year, with an additional 60 students.

The school has been remarkably successful. Though its students have come from the leprosy colonies of Tamil Nadu, they scored so highly on the national exams year before last, that the school was named as the top school in the Kanchipuram District, which boasts more than 500 schools! Many students have gone from begging on the streets to having windows of opportunity opened to them.

Students have gone on to prestigious prep-schools such as St. John’s Academy and Meenakshi Aman Academy. The 12th standard graduates have gone on to colleges where they studying engineering, accounting, nursing, and more. Sri Ramachandra University offers scholarships to medical school for qualifying graduates from Rising Star. The Marriott hotels offer training in hotel management.

Medical care has grown. Initially Becky and her friends would use their pocketknives to dig out the infected wounds of patients, in the dirt with no sterile facilities. Now Rising Star has mobile medical clinics to serve 54 leprosy colonies. Last year 13,500 treatments were provided, along with medicines. Surgeries are provided free by the Sri Ramachandra hospital.

The colonies have also been helped through Rising Star’s Colony Development Program. Hundreds of small businesses have been started so that the patients can support their families with dignity instead of begging. Besides money, this increases self-esteem as the patients become productive members of society. Hundreds of toilets have also been constructed in the colonies, as well as community centers and computer labs.

Most touching was the presentation of how the program impacts individual lives. One girl had suffered from leprosy as a baby, was provided medicines and was cured, and now hopes to win one of the medical scholarships from Sri Ramachandra, to help others.

Another child was brought by his father from New Delhi, but because the school was full and the father didn’t have enough money to get his son back home, the child was left in the leprosy colony with the idea of getting him again when there was money. Becky found the child feeling abandoned and crying, so she brought him to the school. Five weeks ago she was happy to see him receiving awards for academics, sports, and leadership. What a change!

Two other children were helped 15 years ago. From never owning a toothbrush, they are now in college studying business and accounting. Their lives and their children’s lives will be vastly different because of Rising Star’s influence. 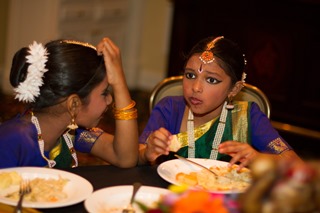 And in Atlanta at the program, a beautiful thing happened. One of the youngest dancers approached Ms. Douglas after the program. She told of her desire more than a year ago to begin saving money so that she could help underprivileged children. She had been given jobs to do around the house and had saved the money, but that night her heart had been touched and she said she now knew where she wanted to donate her funds—to the children at Rising Star!

Jeri Colton spoke of the sponsorship program that helps families in America fund children at Rising Star, and of the sweet experiences these sponsors have had. Christine Cronquist spoke about the opportunities to go to India as a volunteer and work with the patients and their families. The volunteers also tutor children—which may explain their rising to the top on the national exams! 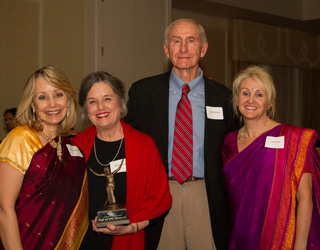 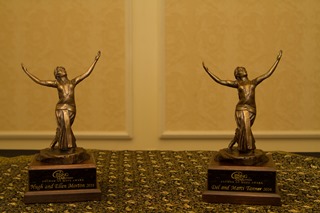 Becky Douglas and Sally Read, a former president of the organization, with Rising Star’s Anchor of Hope Award winners Ellen and Hugh Morton.

Nearly everyone in the room had participated in one way or another towards meaningful change in India. Four people in particular were honored: Del and Marci Tanner received the Rising Star Foundation of Hope Award; Del had served ten years as Chairman of the Board of Directors, and Marci had volunteered overseeing the Sponsorship Program, each volunteering countless hours. Hugh and Ellen Morton received the same award: they had read an article about the charity’s work in the Atlanta Journal-Constitution and had funded the medical program, working with Dr. Mani Balu and Dr. Parasarathy (Pro-Chancellor of Sri Ramachandra Medical Colleges and Hospitals) to create the Rising Star Medical Program that has now provided tens of thousands of medical treatments to the leprosy-affected.

Rising Star Outreach now serves 29,000 people affected by leprosy in 54 different colonies. As they grow, more of these people who have been forgotten and pushed aside can become productive citizens of India living lives of meaning and happiness.