COVID-19  In-depth info for Indians in Atlanta/Georgia. Click here
Home > Magazine > Around Town > Gandhian Narayan Desai spins the symbolic charkha during his homage at the Gandhi Statue in the King district!

Gandhian Narayan Desai spins the symbolic charkha during his homage at the Gandhi Statue in the King district! 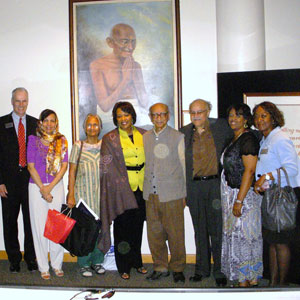 Narayan Desai, son of Gandhiji’s personal secretary and biographer Mahadev Desai (no relation to the reporter of same name), was in Atlanta, "a city too busy to hate," during the last weekend of March. The honor of hosting him and his daughter Dr. Sanghamitra Gadekar at the King Historic District on Saturday, March 31st went to the Gandhi Foundation of USA (GFUSA).

Narayanbhai Desai, 87, born in Bulsar, Gujarat, moved to Gandhi’s ashram as a tbaby in 1924. He spent next 23 years in the Sabarmati Ashram, getting educated and trained by Gandhi and his close associates. After Indian Independence, Narayanbhai joined the peace brigade Shanti Sena. Author of over 50 books and hundreds of articles and a recipient of numerous awards including the UNESCO Prize for International Peace, Desai is Chancellor of Gujarat Vidyapeeth, the university established by Mahatma Gandhi himself.

Desai’s complete attachment to Gandhism was obvious during his tribute to Gandhi at the Gandhi Statue in Atlanta. Even before a formal welcome by GFUSA’s Antony Thaliath could take place, Narayanbhai opened his box of charkha (spinning wheel which he carries with him all the time) and immersed himself in spinning diligently (using organic cotton wool) as a symbolic gesture and reverence to Gandhi’s call for self reliance during the Independence movement. The symbolism of the charkha was explained by his daughter Sanghamitra. Desai wore his own handspun khadi dyed in organic vegetable dyes! 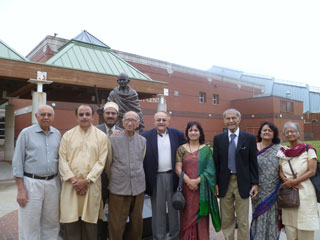 (Photo: Mahadev Desai) GFUSA Chairman Subash Razdan, who presided at the homage, remarked that it was his unique honor and privilege to present a Gandhian and his daughter. He added, “Mahatma Gandhi and his right hand man and alter ego, Mahadev Desai, father of our revered guest Narayan Bhai, worked closely together for India’s freedom movement. It is also heart-warming to see so many children from Chinmaya Mission Bal Vihar here, some of whom are winners of the Essay Competition which included topics like Peace, Nonviolence, Relevance of Gandhi, etc.” 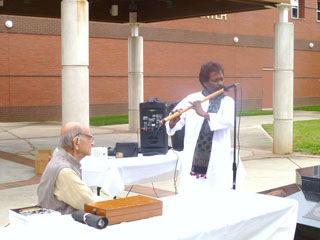 Narayan Desai with his charkha box as G.S. Rajan plays flute. (Photo: Mahadev Desai) Razdan noted, “Almost a million visitors come here annually and admire the Gandhi Statue. We are also fortunate to have amidst us G.S.Rajan here today. He is a flautist of national fame and will give a rendition of Gandhiji’s favorite bhajan ‘Vaishanava Janato’ on flute.”

One of the Bal Vihar students of Chinmaya Mission, Guru Raj Deshpande, lauded Gandhi and declared, “With education, determination and discipline, we can change the world.”

President-elect of the American Association of Physicians of Indian Origin (AAPI), Dr. Narendra Kumar recalled the visit eight years ago of Minister for Overseas Indian Affairs, Hon. Vyalar Ravi. President of the Indian American Cultural Association (IACA), Kaushal Tripathi paid tribute stating, “Today is a historic day for us. We have been reading about Gandhi and Mahadev Desai since our childhood. We feel blessed to see one of their own here. …. IACA would like to organize Gandhi Katha (story) … in the near future.”

Activist daughter, Dr. Sanghamitra, who runs the charity Sampoorna Kranti Vidyalaya in Vedchhi, Surat, Gujarat, observed that, “as a doctor, as a woman and as a human being, I feel that we should strive to make the world better with knowledge/research on environment, on pollutants, on development issues, etc. We must ensure that our children do not blame us for leaving behind a hazard of nuclear weapons, nuclear poison, chemical pollutants, environment degradation, etc.”

In his address, Narayan Desai said that the popularity of ‘Vaishanava Janato’ is due to Gandhi’s embracing of humanity in his favorite song. Receiving his welcome bouquet from NPS officer Mari Hayden (of black ethnicity), Narayanbhai observed the absence, in general, of the participation of the black community in such an important diverse event attended primarily by the Indian American audience.

He said he was however very happy to see many children in the audience. “When children ask me as to when was the first time I saw Gandhi, I reply that it was Gandhiji who saw me first because I was only three months old when my mother brought me into the ashram.” He recalled amusing anecdotes for the children present about life in the ashram. “Gandhiji became a child when he was with children. To me and the children of the ashram, Gandhiji was not a ‘Mahatma,’ nor was he a ‘Bapu’ to us. He was only our jolly good friend and companion—one who laughed with us and made us laugh; one who splashed water on us and enjoyed being splashed over by us! We had lot of fun with him when going on walks with him or playing games with him. He taught us not to compete against other children but against ourselves and to build a world with cooperation rather than a world with competition.”

He added, “All visitors … were requested to be quick, being brief and be gone after darshan and a brief meeting with Gandhiji. Yet no one seemed to mind because, as one visitor reported …, ‘in two minutes, Gandhiji poured his whole heart in me. I felt his spiritual energy in me.’ Gandhiji had a knack of winning over even those who disagreed with him. Rajaji (first Indian Gov. General of Independent India) had once remarked that ‘Gandhi understood us more than we understood ourselves primarily because Gandhiji was a patient listener.’ God has given us one tongue and two ears because God wants us to listen twice and speak once.” Desai advised the children to follow Gandhi’s method of truth, love, of caring and sharing to make a better world.

Narayanbhai then led the audience in singing "Raghupati Raghav" followed by garlanding the Statue. 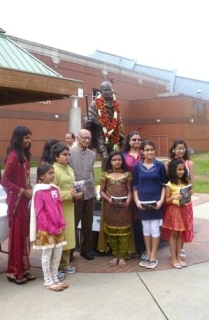 Narayan Desai with Chinmaya Mission Bal Vihar youth, essay winners. (Photo: Mahadev Desai) Sandeep Gauba, an IT consultant from IIT Delhi and a volunteer of Chinmaya, while assisting Narayanbhai with presentation of Gandhi books autographed by Narayanbhai, said, “It was a blessing to listen to Narayanbhai. His stories were truly inspirational not only for children but for all." The Bal Vihar Essay winners—Suma Gangasani, Neharika Bhatia, Sanjana Basker, Gururaj Deshpande, Manasi Deshpande, Sandya Valli Vikram, Preity Chauhan, SrijaSomaka, and Ayshali Gauba—were presented their prizes by Narayanbhai.

Narayanbhai and his daughter then walked with the gathering to view the exhibits, lay wreaths at the crypts of Dr. King and Coretta Scott King, and view the King Room, Rosa Parks Room, and Gandhi Room.

Both Narayanbhai and daughter Sanghamitra take Gandhi's message to the public not only through books, but through songs, plays, street theater, and most recently a contemporary version of katha (an age-old traditional story telling form). They have established a center at Vedchhi, a small tribal village in south Gujarat where hundreds of young, mainly rural activists, have been trained in Gandhi's values of self reliance, organic farming, nonviolence, and community service.

Among those present was Dr. Uma Majmudar, who presented Narayanbhai her own book on Gandhi’s Pilgrimage of Faith: From Darkness to Light at the statue.

Earlier on Friday, they were greeted by CEO of King Center Rev Bernice King and Dean R. Kamphaus of Georgia State University in the Gandhi Room in the Freedom Hall.