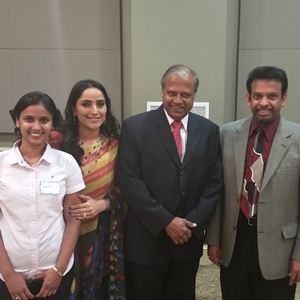 GAPI president Dr. Indrakrishnan first updated the officers as to past and upcoming events, and other officers contributed valuable suggestions for improving the efficiency of GAPI’s functionality. Dr. Natrajan opened the general meeting for members and spouses by recalling the contribution by Indian physicians of Augusta to the community even well before GAPI was founded 26 years ago. Dr. Indrakrishnan described the successful GAPI-APPNA health fair inaugurated by Senator David Shafer with the chief guest being Governor Nathan Deal and GAPI leadership meeting with visiting Indian Health Minister Hon. Harsh Vardhan in Atlanta. He announced that GAPI is a welcoming partner organization for the upcoming reception for Hon. Narendra Modi on September 28th at Madison Square Garden in NY, and it will be well represented by its officers and senior members.

The importance of GAPI getting involved in serving mainstream society beyond the Indian community was emphasized by Dr. Indrakrishnan. He invited the audience to attend a grand musical dance drama production to raise funds for two charity organizations. The net collection will be exclusively donated to Tapestri and Soldiers’ Angels. Tapestri works for the benefit of abused children victimized by human trafficking in Georgia, and Soldiers’ Angels supports wounded war veterans of Georgia. Bharathakala Dance Academy and Third Eye Dancers are partnering with GAPI for this program, Once upon a Time - Beauty & the Beast, on October 26, 2014 at the Gwinnett Civic Center.

A membership drive in Augusta was announced by Dr. Raghu Lolabandu, GAPI treasurer, who also explained the benefits of being a GAPI member. As the final item, Dr. Tarak Patel gave an outstanding educational presentation titled “Updates on Antibiotics.” It was a timely topic, and a lively question and answer session followed his talk. Dr. Natrajan concluded the meeting, and all enjoyed a dinner of Italian cuisine.