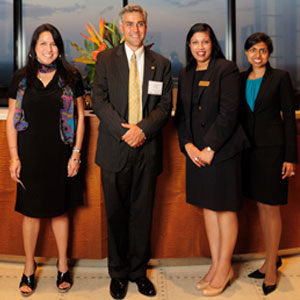 On August 13, 2013 several organizations representing the Asian American & Pacific Islander (AAPI) legal and political communities presented a forum at the law offices of McKenna Long & Aldridge in Atlanta to discuss the need for and the methods to achieve a higher representation of AAPIs in the judicial system. Although the advice given was geared towards judges, attorneys, and politicians, much could be gained from it by anyone. 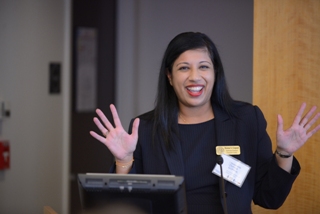 Diversity inclusion was the watchword, and Farooq Mughal (GAAPI TF) specified the need for more judicial appointments to represent our communities. Donna Gopaul (photo at left) was introduced as the first South Asian appointment to Solicitor General in Georgia—and that being not even in Gwinnett, which has a good 13% of its population Asian American, or Johns Creek with a whopping 23% APA, but in Forsyth County! It is a positive step, Gopaul said, to let it be known that Asian Americans stand for justice just like other Georgians. She explained that her March appointment by Governor Deal had triggered a special election for next year, and that she is now happily in campaign mode, inviting support. 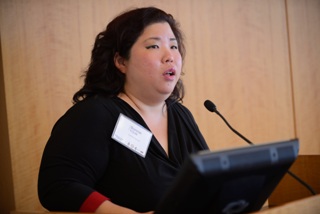 Moderator Bonnie Youn (KABA-GA and one of Georgia Asian Times' "25 Most Influential Asian Americans in Georgia") noted that the "success and legal acumen [of Gopaul and other Asian American judges and attorneys] gives Justice an Asian American face in Georgia." We need to bring Asian faces forward since our APA population has grown 83% from 2000-2010, she said. “The [recent] surge in APA judges in Georgia is also reflective of the national trend, where the current Administration has appointed more APA federal judges to the bench in the past four years than at any time in history.” 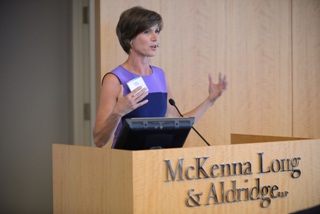 US Attorney Sally Yates understands minority positions. Before her appointment (first woman to serve as US attorney in the Northern District of Georgia), she had handled prominent cases: the corruption trial of former Atlanta Mayor Bill Campbell and the case against Olympics bomber Eric Rudolph—but she had also made the sex trafficking issue a cornerstone of her work. Atlanta was one of the top 14 cities in the US for sex trafficking in 2005, and her office just helped break up a ring in Atlanta this May. The immigrant community is hit hard by this issue, and since victims were afraid to come forward, it was not being investigated. Having the trust of the people we serve, she said, is vital, and our most fundamental rights are liberty and justice. The people deciding that issue must reflect the people of the community. Diversity should be part of recruiting, hiring, mentoring, and professional development, she advised, and should be in a policy statement to hold us accountable. 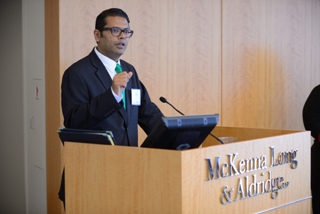 Farooq Mughal on the need for more South Asian faces: "…ten years later, I have a voice; I am not an outsider."

Farooq Mughal told his personal story: even as a government employee, he had had to register as a Muslim after 9/11/01 (this registration only ended in 2011), and many Pakistani American citizens he knew went back because of the political stress. He and Bonnie Youn discussed what they could do, and became involved with bringing the White House AAPI Southeast Regional Action Summit to Atlanta in 2012. So "ten years later, I have a voice; I am not an outsider," he says. Part of helping more people to feel that way would be to help more South Asians and AAPIs attain positions in the judicial system. Hence the work for the Georgia AAPI Legislative Day, for reappointment of the Georgia Commission on Asian-American Affairs, and also the title of this program: "Building the Pipeline of Georgia’s Asian Pacific American Judges.” 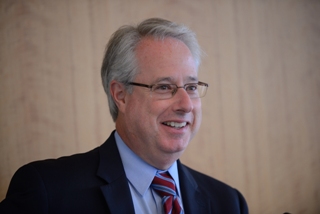 Georgia Attorney General Sam Olens: Show your desire to work in the community and make the world a better place by working in ethnic and religious groups but also groups in the greater community.

Keynote speaker Georgia Attorney General Sam Olens was introduced as the first Jewish candidate to win a statewide, partisan race in Georgia, and although he does not emphasize that, he noted that it was "easier if you're a white Christian, that's a fact, but if you have the drive and intelligence, you can go far in our state." He did emphasize that it was important to be active in nonprofits in your community, even beyond your own cultural group. "Get out there," he said, because if you leave Nonprofit Activities blank in your application—"don't walk in the door." Show your desire to work in the community and make the world a better place by working in ethnic and religious groups but also groups in the greater community.

He recommended other ways of getting out with people: It is also a huge benefit, he said, if you start your legal career as a prosecutor and become comfortable in the courtroom. Since nothing is more important in politics than accessibility, return your email and phone calls! And finally, remember what is important, he advised: not your bank account or car, but your spouse, family, and community—"from the day you graduate law school" that is what is essential for elected officials including judges—and perhaps for other careers as well.

A conversation followed, with a panel of three judges: the first African American in the Supreme Court of Georgia, Justice Robert Benham; the first Asian Pacific American on the Georgia Court of Appeals, Judge Carla Wong McMillian; and the first APA and South Asian on the federal judiciary in Georgia, US Magistrate Judge Justin S. Anand. 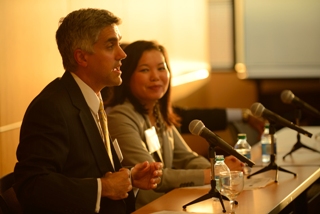 Judges Justin Anand and Carla Wong in conversation with the audience.

Justin Anand related what inspired him to love the law: family history. His father first had to move hundreds of miles and lost his own mother on the way, and then, living in another country, never had a sense of entitlement and never let his son forget what freedoms we have here. What kept him going? You need internal motivation, he said (because a judge doesn't get a lot of feedback) to be effective and fulfilled, to spend the long hours to do it well.

Good advice was plentiful. Judge Wong: This is possible for Asian Americans. "Meet the people and ask for their vote." Fayette County has less than 5% Asian Americans but there are three Asian Americans in office there now. Show that you are fair and impartial. 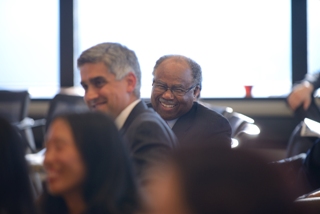 Georgia Supreme Court Justice Robert Benham (on right): "Don't worry that others 'don't look like me.'"

Justice Benham: "If we work on things that are in common, they're greater than things that separate us. People can put history behind us." "People don't believe they're prejudiced—speak to who they think they are." "You shouldn't try to get credit for everything you do. Planting a seed is important. Be happy for the result even if you aren't given credit." When asked how he felt about being a minority judge, Justice Benham had definite advice: "People are watching you—you have to work hard and work smarter. … Accept the lay of the land as you find it and do the best job you can do. … Have a good reputation; treat everyone respectfully. Don't worry that others 'don't look like me'—do your job and they'll do their job."

All three justices appreciated the help that associations and mentors could give.

Speaking to Khabar, Judge Anand explained that although he enjoyed his diverse mix of criminal and civil cases, what he found truly invigorating was that every case was important to society and to the people involved. Lives were impacted, and he felt privileged to serve. "The public good is served one case at a time." He also advised young South Asians that society needs the best, of highest character, to serve in public office and in other leadership positions. "They should see themselves in that role," he said, and broaden the talent base for the country to continue to be strong.