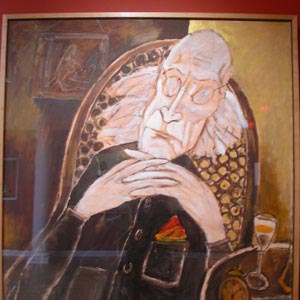 If you have not yet visited Oglethorpe University’s Museum of Art, now is the perfect time. The museum itself is a gem, located above the library in one of the wonderful Gothic revival buildings inspired by James Oglethorpe’s honorary alma mater, Corpus Christi College at Oxford University in England. The museum space is a delight, its light airiness contrasting comfortingly with its solid stone, nooks, and pillars—like a cozy garret for an artist, a womb of creativity. It has been filled over the years with numerous exhibits earning it renown, including those on Far Eastern art: Buddhist, Tibetan, Chinese, and Japanese. Now, until May 15 th, the museum presents the first public display of a collection of more than 50 works from 28 of India’s most famous modern artists.

While modern art is usually thought of as Western, it appears internationally. A few exhibitions have looked at contemporary art of India, and the Peabody Essex Museum in Salem, Massachusetts is the leading museum in the West to focus on Indian art from colonial times to the present. Still, this collection of paintings is unusual.

The painters were all born in India or pre-partition India. A few were born in what is now Pakistan or Bangladesh, and live in India. One lives in the United States. The paintings are all after 1947, when artists and the Indian public were considering how the new India would be defined. Much of India’s charm lies in its age, history, and tradition, and much of its art is there as well. While some of its modern paintings may engage landscape or the abstract or stories, the paintings in this collection, titled “Goddess, Lion, Peasant, Priest,” are figural, showing people of all kinds, and are presented in three groupings: individuals or characters, people in their inhabited spaces, and people as spiritual beings.

Among characters, some may be appealing and some disturbing, for example. Two strikingly appealing characters are Paritosh Sen’s “Man in a Cane Chair” and Ganesh Pyne’s “Untitled (Hanuman).” The first is understood by the things around him and by his attitude to be a portrait of a Bengali intellectual, presented with pleasant humor. The second is not the popular strong, young Hanuman, but a delicate rendering of a bent elder, perhaps meditating on the costs of war and violence. Many other characters are shown in ways that imply their troubles, relating to politics, modern wars, or mental conditions. The paintings of people in their spaces take on social issues of rural vs. urban living, of middle class life for a woman, of violations of privacy.

In the spiritual group, some are decorative and employ traditional symbolism. One is an Easternized Jesus; one painting suggests similarities between Islamic, Sikh, and Buddhist traditions. Another suggests both spiritual and political connections from India to China and Japan. Several depict tensions between the political or social realm and the spiritual. In all three sections of the exhibit, the personal, the social, and the spiritual, the world is shown as complex, and the path to peace is not easy, say the paintings.

How did this exhibit come about at Oglethorpe? Donald Rubin was once a student at Oglethorpe, living in a small room on the same floor as the current museum. He still holds that space, and the school, close to his heart. After he and his wife began collecting Himalayan art, they founded the Rubin Museum of Art in New York and also began loaning exhibitions to Oglethorpe—this is the latest. As well as working to preserve art from the Himalayas and the surrounding regions, the Rubins are involved with many charitable projects and organizations working in Asia.