Heart to Heart with Pankaj Udhas in Atlanta 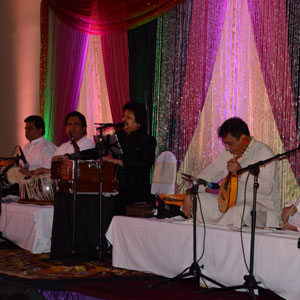 Pankaj Udhas with his acclaimed musicians at the Occasions Event Hall.

Ghazals come from the heart! This is what the ghazal maestro Pankaj Udhas proved at his August 10th concert in Atlanta to a sold out crowd of over 400 as a part of his "Heart to Heart" concert tour organized by Cafe Bombay in cooperation with Atlanta Event Hall.

Padma Shri Pankaj Udhas’s name needs no introduction in the world of ghazals. He is responsible for changing the world of ghazals as we know it today. He is not only a ghazal singer but has also sung a great number of songs for Hindi movies as a playback singer. His footprints in Bollywood with songs like "Jiye to Jiye Kaise," and "Chitthi Ayi Hai" are timeless.

In this concert he sang many soulful ghazals like "Ghungroo toot gaye," "Chandi jaisa rang hai tera," and "Thodi Piya Karo" that have mesmerized ghazal lovers over three decades with his intoxicating renditions. Pankaj sang several new ghazals from his recently released album Sentimental, which he autographed for a limited number at the show. 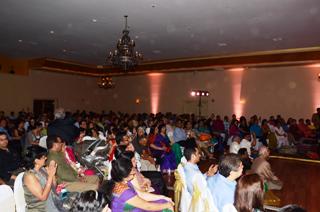 Jay Walia of Cafe Bombay along with help from the Mehfil Group, Ashok Goyal, Kamru Hamrani and Ramzan Virani of Atlanta Event Hall delivered a full house. Ashok Goyal emceed. The event began at 9pm sharp at Occasions Event Hall in Tucker and continued to the wee hours of the morning with a brief intermission. Dinner was sumptuous and VIP's were treated to wine-n-dine along with front row Maharaja style seating.

Despite decades of singing, Pankaj still has that young voice that was evident in many of his ghazals. His soothing voice and the way he led the concert had the crowd swaying and singing along with hits like "Ek Taraf Uska Ghar," "Na Kajre Ki Dhar," and, of course, his signature ghazal "Todhi Thodi Piya Karo."

Who can ever forget his soul stirring, passion igniting song "Chitthi Ayi Hai" from film Naam. "Ek Taraf Uska Ghar," was about a person unable to decide whether to go to a mai-k-daa (where liquor is served) or to his beloved’s house. 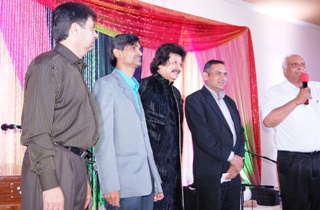 "What an energy we had in the beautifully decorated auditorium," said Jay Walia, who plans to bring more concerts to Atlanta in cooperation with Atlanta Event Hall and other promoters.