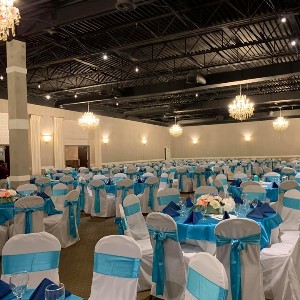 The Heartfulness Institute (a nonprofit focused on Meditation and Wellness) has developed programs to help youth cope with mental health issues, a global crisis coming from stress, mental fatigue, and competition, resulting in a record number of recent deaths by suicide. HeartNotes 2019 fundraising gala at the Signature Ballroom, in Suwanee, GA, on June 2, 2019 was graced by over 500 attendees and Bollywood actors Omi Vaidya and Radhika Apte. The title sponsor was 27th Investments, and the funds raised approximated $100K!

The Ballroom’s peaceful white and light blue décor included comfortable chairs on stage for keynote speakers. Despite initial audiovisual difficulties, the rest of the program was crisply delivered. 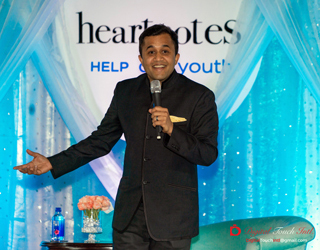 Omi Vaidya performed the opening act for the event. California born and now a famous Bollywood personality, he is well known as Chatur in the film 3 Idiots. Famous for his straight face comedy, Vaidya is a graduate of NYU School of Arts and is a Hollywood/Bollywood actor, director, writer, and TV presenter. Dressed in a sharp black jacket, he spoke in his favorite mix of “chaste” Hindi and English.

During his rib-tickling standup comedy act, he made lighthearted comparison between a Bollywood and a Hollywood film. “The former is just like a Hollywood film. Take a Hollywood film, remove all reason and logic, insert MTV-style random music, take any idea and put Salman in it!” He spoke about the problem of striking a balance of identity in America. “It is like holding a fork in one hand and eating with the other. We try hard to be American and we even celebrate American holidays like Black Friday. We stand in line for hours to get an obnoxiously large TV, but as Indians we wrap up the remote in plastic.” He said he was happy to see so many Indian faces in the audience—the only other place to find so many is Costco! The sales, the free food! After pushing the heavy shopping cart through various aisles, to approach an old lady with a shower cap offering a tiny morsel of Swiss cheese or mushroom ravioli is rewarding! Since Costco has begun carrying ghee, Indians buy gallons, even if it lasts a year, because they have a second fridge in the garage for overstocking! And there’s Costco’s return policy: Indians love returning stuff more than shopping! Vaidya entertained also with jokes about his Gujarati wife: Patels should advertise that if you are loyal to their motels, you may get a night free, but if you marry one, you may even get a free motel! He made a point that some of the actors idolized by fans actually lead normal lives at home. After much thunderous laughter, he concluded in his Chatur-like Hindi delivery with an appeal, “dhan sab chuupake rakhte hai lekin Heartfulness ko aapka dhan dena hi padega.”

Heartfulness Institute is a global organization with thousands of certified volunteer trainers serving more than a million meditators in 130 countries. It is supported by Global Guide Kamesh D. Patel, fondly known as Daaji. Sanjay Sehgal, CEO of MSys Technologies, is a Heartfulness meditator and Regional Leader. Using a PowerPoint presentation, he explained the alarming suicide epidemic and the efforts of Heartfulness Institute in tackling it. “I am part of the Heartfulness Education Trust (HET)…. The current academic curriculum needs changing. Due to the demands of multitasking and other distractions, our youth is experiencing anxiety, depression, fear of failure, and fear of not being able to cope with peer pressures. This leads them to suicides. Suicide epidemic is a silent killer. The World Economic Forum has stated that the biggest epidemic of the 21st Century is mental distress. About 700 million people are suffering from some kind of mental disorder, resulting in a staggering number of 800 thousand suicides—75% of which are by youth before they reach age 24 and 50% before age 14. Suicide is the second leading cause of death, globally.

To cope with this alarming epidemic, Daaji decided to implement a holistic program, by bringing the heart into the curriculum, to help students transition into adulthood with the right life-skills. HELP (Heartfulness: Experience Life’s Potential) is a 16-week certificate course for intermediate students. It includes nutrition, yoga, exercise, and meditation. Meditation is the most important aspect in the program as it brings inner transformation. In the first year, HELP touched 57,000 students and in the second year over 331,000 in 1,500 schools in Andhra Pradesh, Gujarat, Uttar Pradesh, and Tamil Nadu. And there was a heartening drop in the number of suicides. The target is 2.5 million students by 2024. HELP can serve about 30 students for $1 a day. Recurring donations can be made at http://heartnotes.events.”

An Atlanta trainer, Anuhya Bhaskara, gave a short introduction to the Brighter Minds program practiced at HET. It aims to enhance observation and cognitive functions, i.e. process of acquiring knowledge and understanding through thought, experience, and senses. It is in 13 countries with more than 500 learning centers, 800 trainers, and 15,000 children trained. She invited 12-year-old Lakshman on stage, who after being blindfolded, could identify colors of balls by telekinesis, and words written by the audience on scraps of paper. He even solved a Rubik cube in record time.  (Photo, right: Digital Touch International) 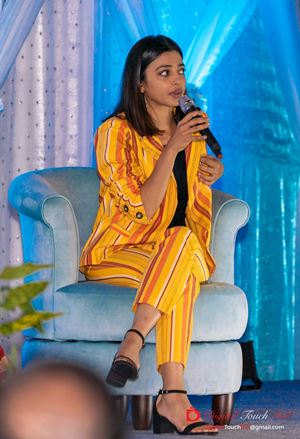 Emcee Neha Negandhi warmly welcomed Radhika Apte on her first trip to Atlanta. Radhika, born in Tamil Nadu, attended an unconventional school in Pune, later graduating from Ferguson College, and going to Mumbai. At first, she went through mental anguish at the start of her career. She pulled back and went to London to learn contemporary dance for one year and returned to Pune with her husband Benedict Taylor. Taylor convinced her to move back to Mumbai. She has since acted in theatre, on TV, and in more than 40 movies such as Padman, Sacred Games, etc. Radhika and Neha’s onstage chat appears below. 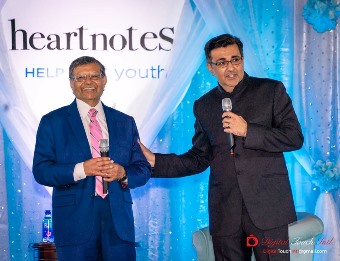 Atlanta’s Prof. Jagdish Sheth and Subash Razdan were felicitated with Lifetime Achievement Awards. Rajen introduced his dad Jag Sheth, who has been teaching marketing for 56 years, has authored over 40 books and 600 white papers, is on the board of several companies, and is a compelling speaker. Expressing thanks for the recognition, Prof. Sheth said, “This award is meaningful for me for three reasons: (i) The cause is very important. It is sad that we have no time to share anything together. We have no time to bond with each other. Loneliness creates depression and escapism through drugs and other vices. People are living in a virtual world. Ultimately they take their own lives. So the cause is the main reason for accepting this award. (ii) The Heartfulness volunteers are incredible, professional people who believe strongly in the cause. I believe that no organization runs well without strong volunteers who are dedicated to the mission and the cause. (iii) Third reason is more personal. I think it is the first time I am getting an award with the introduction by my own son! Thank you all.” 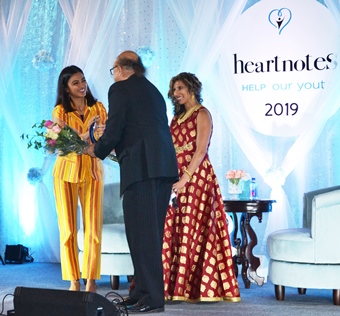 Neha introduced awardee Subash Razdan, who has been conferred the Pravasi Bharatiya Samman 2013 Award, highest award by Govt of India for NRIs, for his outstanding public service. He is a graduate of IIT New Delhi and a longtime resident in Atlanta, Chairman/Co-Founder of the Gandhi Foundation of USA (GFUSA) and former President of IACA. In his acceptance remarks, he declared, “I would like to congratulate Prof. Jagdish Sheth for his recognition. I feel blessed to receive this award in his company. The presentations here have been very inspiring as they are about empowering youth with lot of dignity.”

Neha Negandhi’s onstage chat with Radhika Apte,
including insights on her personal and professional life:
Tell us about your unconventional schooling and what character traits that instilled in you.
At young age, students experience too much competition in order to get validation from society. I was home schooled with friends where we had more practical rather than rote learning.

You wanted to be an actress at the age of ten. Was that because of your unconventional schooling?
Many people want to do things at an early age. Nothing wrong in that. Why should we be afraid of failure? You learn from failures. As Churchill said, “Success consists of going from failure to failure without loss of enthusiasm.” Everyone can make a choice every moment. And accept the outcome.

In your first move to Mumbai you experienced some mental anguish. How did you rise above that?
I had support, but I could not find work so I got depressed. In cities like Mumbai movies is more business than art. It is a freelance industry so an ongoing struggle for new artists.

When did you have that big break? You don’t claim to be a big star but you really are!
I don’t think I had that big break. I worked hard for all my films during the last six years. I am still struggling a lot. I don’t think I have achieved what I want to achieve. I got a boost only when Netflix decided to use my name for publicity.

It is said that your Padman co-star Akshay is a prankster while filming. Has he played any pranks with you?
Yes. While filming, if I am under pressure, I am like a robot. And on one occasion he and director Balki did play a prank with me. (Radhika narrated the amusing prank.)

What advice would you like to give to young actors? Should you compromise when starting out in film industry?
I don’t like to give advice. People have different ambitions. One can choose. And face the consequences of that choice. But one should not make compromises.

Any role models?
I admire many people for different things. I admire Akshay Kumar for his dedication to physical fitness.

What is your normal day like?
Each day is different, of course. But daily, after I get up, I religiously write about two pages in my diary. I write about my dreams, about my thoughts, etc. (applause). I am very dedicated about this habit and it has served me very well.