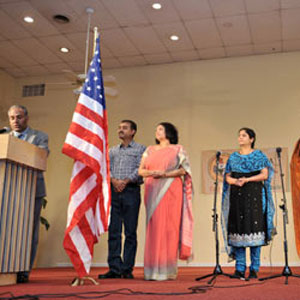 As the sun shone down on Atlanta, chief guest Consul General Ajit Kumar unfurled the tricolor amidst shouts of “Bharat Mata ki Jai” and “Jai Hind.” This was followed by the Indian National Anthem, “Jana Gana Mana” and the American National Anthem sung by Anu Romesh.

Celebrations continued in the auditorium. IACA Vice President Nivedita Garabadu and Secretary Rina Gupta emceed. President Kaushal Tripathi gave a brief history of IACA, introduced the 2012 executive team, and recognized past leaders. Addressing Hon. Ajit Kumar, he said, “We are thankful to the Government of India, and to Prime Minister Dr. Manmohan Singh for opening a Consulate in Atlanta. Not only that, they sent a young, energetic Consul! We assure you of our Southern hospitality and full cooperation.”

Consul General Kumar spoke: “I am very grateful for the invitation. … the Constitution of India came into effect on 26th January 1950, hence the Republic Day is celebrated on 26th January each year ever since.” He spoke of India’s economy and mentioned India-U.S. relations which have undergone rapid transformation in the last decade or so. Dr. Manmohan Singh’s visit to Washington in 2009 was the first State visit by any world leader, and later President Obama’s visit to India in 2010 turned this relationship into one of the strongest between two countries. He noted the breadth of Indo-U.S. collaboration. “I would like to pay tribute to the vibrant Indian-American community and organizations like yours which are real ambassadors of India making our task that much easier. Culture is very important. Soft power is as important as the economic and political dimensions of foreign policy. I am glad to see that Indian culture, cuisine, yoga, Ayurveda, Bollywood also are flourishing and making inroads into the U.S. I am very grateful to all of you to uphold our rich culture and heritage and I wish you all the best in your endeavors.” He concluded saying, “The India Consulate in Atlanta is in a temporary location right now. We plan to move to a permanent location after a few months when we buy a new property for a permanent location. Till then the Consulate in Houston will serve you. And when we move to a permanent location, I assure you we will try our best to serve the community to the best of our ability.”

The emcees engaged the audience, especially the children, into an instructive and amusing trivia quiz on India’s Constitution, population, states, languages, name of the first woman Minister, names of Mahatma Gandhi’s sons, etc. They invited Ajit Kumar on stage, and he participated jovially in the fun. If the audience failed to answer, he helped out with correct answers in a flash! The emcees’ cheerful rapport with the audience and with the Consul-General made this item an exciting and enjoyable one. 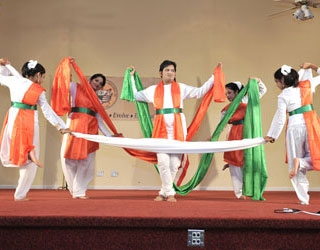 After a few more trivia quiz questions, Kaushal Tripathi recognized some of the new IACA members, including new life member Mr. Robin Mathew, and invited them onstage to meet the consul.

Ani Agnihotri spoke about the Eye on Crime Organization formed to protect Atlanta’s Indian-American residents against home invasions, and announced the meeting on January 29.

Ramanbhai Patel noted that twenty years ago IACA had Indian Youth Association (IYA). He exhorted the youth in the audience to again form a vibrant IYA.

After refreshments, the consul visited the Gandhi Room and toured the IACA/ICRC facility.