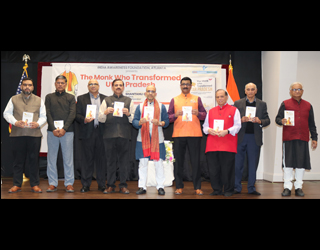 India Awareness Foundation (IAF) hosted the book release of The Monk Who Transformed Uttar Pradesh in Atlanta on January 29, 2022. The evening event, in honor of Shantanu Gupta, the author of the book, was attended by more than 250 members of Indian-American community at Gokul Dham Haveli, Atlanta. The event was led by Dhiru Shah and Rajeev Menon along with a team of the India Awareness Foundation, Amitabh Sharma, Shobha Swamy, Himanshu Kanwal, and Neetu Chauhan.

The event began with dinner provided by Gokuldham during which the audience enjoyed a meet-andgreet hour. The audience was treated to a vintage repertoire of songs starting with Vande Mataram. It was followed by Bharat Mata, a self-composed song by Jyothsna Nanu. Students from Deeksha School of Performing Arts—Sanjana Menon, Manasa Prasad, Maya Narayanan, and Ashwika Anil Nair—presented a beautiful dance based on Samaja Vara Gamana, one of the famous kritis of Saint Thyagaraja, which was choreographed by their teacher Anupa Thakurta.

The attendees were welcomed by the emcee for the evening, Neetu Singh Chauhan, with an introduction of Shantanu Gupta. Dhiru Shah, President and Founding Member of India Awareness Foundation (IAF), welcomed Gupta and gave a brief introduction of IAF.

In a Q & A session moderated by emcee Neetu Chauhan, Gupta discussed his book. He was later honored by Dhiru Shah, Rajeev Menon, Ashok Patel, Pravin Patel, Himanshu Karnwal, Bob Erramilli, Amitabh Sharma, and Tejas Patwa. In his vote of thanks, Rajeev Menon thanked all the artists, the volunteers, the media as well as the attendees.

Earlier in the morning, the author had been given a tour of CNN and Olympic Park. He was also honored by Professor Jagdish Sheth, a recipient of the Padma Bhushan award and a well-known scholar in the area of Marketing.