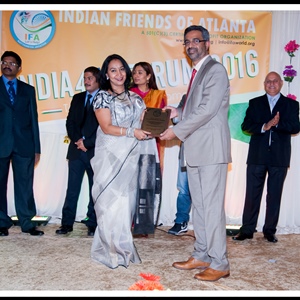 Indian Friends of Atlanta (IFA) held its first India4US Forum at the Signature Ball Room in Suwanee, Georgia on January 30, 2016. The goals of the India4US Forum were to communicate to the community all the services offered by the Consulate of India – Atlanta and to begin to recognize eminent scholars and researchers of Indian origin.

The banquet began with a social hour for networking with guest speakers, including Consul General Nagesh Singh, Consuls R. Srinivasan and D.V. Singh, other Consulate of India staff, and distinguished scholars Dr. V. Kumar and Dr. Veena Rao. Over 50 associations and organizations of Atlanta were represented.

The emcee, former Ms. India USA Meghna Nagarajan, kicked off the event with the national anthems of the USA and India, followed by a minute of silence for Mahatma Gandhi Vardanthi (assassination day, 30 January 1948). Sunil Savili and Sairam Pamulapati of IFA gave the welcome speech on the importance of uniting all of the Indian organizations and how IFA can become the bridge.

Consul General Nagesh Singh spoke at length of the various services that the consulate offers and ways the community can get help from consulate staff. He also felicitated event sponsor Mr. Anil Reddy of MSD solutions. Consul Srinivasan went over the details of how to effectively apply for passports, OCI cards, and visas, and pointed out common mistakes made by applicants. The Consulate provides an open period from 10am to noon on working days for help with applications: walkin, no appointment needed. 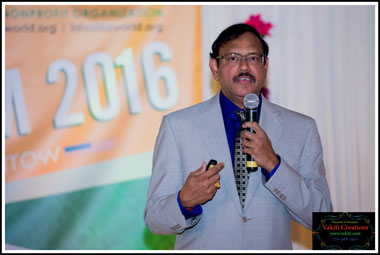 IFA is honoring eminent scholars, academicians, and business leaders of Indian origin in Atlanta. The first in this initiative was Dr. V. Kumar (left), distinguished professor at Georgia State University and a “Legend of Marketing,” who gave a glimpse of his revolutionary theory that has won accolades in 57 countries and saved over 5 billion dollars to the companies: “Profitable Customer Engagement: Using Customer Valuation Theory.”

The next honoree, Dr. Veena Rao (left), a professor and Distinguished Cancer Scholar at Morehouse School of Medicine, introduced the audience to her research on cancer gene BRCA1. Dr. Shyam Prasad accompanied Dr. Rao on stage, and both were felicitated by Mrs. Sheela Lingam.

Mr. Ishrat Alam, Tourist Information Officer from the New York office of India Tourism, IncredibleIndia. org, concluded with a presentation about the splendor that is India.

Shyam Mallavarapu of the IFA team thanked all, including Divnity AV for audio and video, and Sridhar Vakiti and Boppana of Vakiti Creations for photos and videos of the event.