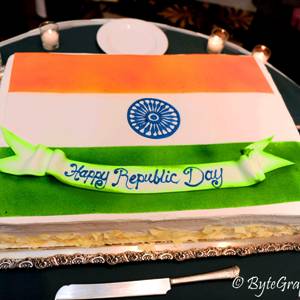 As magnificent as the building for the Consulate of India in Atlanta is, it may not be large enough to hold, let alone seat, the ever growing number of friends of the Consul and the Consulate. And so this year's grand Republic Day reception was given by the Consulate at the stately Atlanta Athletic Club (home of the great golfer Bobby Jones) in Johns Creek on January 26 for around 300 people, including consuls and members of the diplomatic corps, heads of associations, and captains of industry. 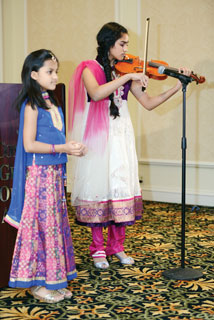 Hansinee Mayani plays both Indian and US national anthems on the violin, with sister Nishtha by her side. (Photo: Bytegraph)

The national anthems of India and the USA began the evening, but this time they were gracefully rendered on the violin by seventh grader Hansinee Mayani with her younger sister Nishtha, as Rifka Mayani emceed.

Consul General Ajit Kumar recognized guests US Representative Rob Woodall (R-Ga 07) and John Eaves, Chairman of the Fulton County Board of Commissioners, among others, and welcomed all on behalf of his wife Margret and his colleagues at the Consulate. He noted that his father had been a member of the Constituent Assembly on 26th January 1950 when India's Constitution was adopted. The Republic was founded on “the selflessness and the vision of those who fought and won our freedom,” he said.

So “where have we traveled in these 64 years?” he asked. He commended India's “vibrant and sometimes noisy” democracy, governing over a billion people and managing such pluralism. He reviewed India's economic growth, which according to the World Bank, should again increase to 6.5% next year and over 7% in the following year—still strong. Having nearly 50% of its population below the age of 25, India's president had just declared, “Give the young jobs and they will raise the villages and cities to 21st century standards.” The middle class of nearly 300 million carries forward the scientific and managerial fields and also provides a consumer market that is emerging as one of the world's largest. Thanks to the Green Revolution and US Nobel Laureate Norman Borlaug, India is one of the biggest food producers in the world, including rice and wheat exports. India is a major IT power—Georgia, as well as Silicon Valley, has known the mathematical and analytical skills of young Indians! From travels in outer space to connecting 900 million people with mobile phones, from producing the maximum number of movies in the world to bringing the International Indian Film Academy Awards (the Bollywood Oscars) to Tampa this year, India is spreading its influence. Finally, India is approaching “the largest general elections humanity has ever seen with 780 million voters who will cast their vote at over 800,000 polling booths using 1.18 million electronic voting machines made in India!” 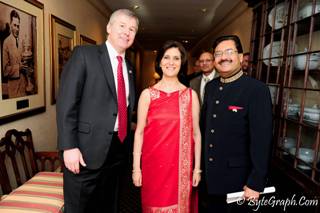 Secondly, the Consul General reviewed the India-US strategic partnership “across a spectrum of activities that touch almost every aspect of human endeavor.” Support is bipartisan in both countries. Trade has increased fourfold since 2005 to reach $100 billion. The US is one of the largest investor's in India's growth, and Indian companies are investing in the US. Indian-Americans and Indian students in the US are active and appreciated. 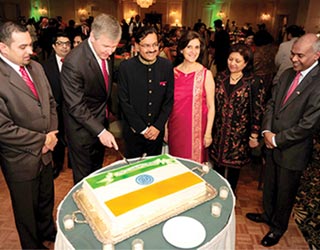 The Consulate in Atlanta has also been active, he joked, listing the numbers of visas and passports, various documents and services that have been issued in only 7 months—and improvements will follow. The Consul General thanked government officials, various organizations, and leaders of the community; with his typical kind and personal touch, he even thanked the Club manager by name for his care in presenting a lovely cake. 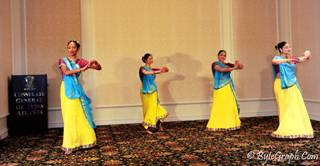 Congressman Woodall also spoke, and after a delicious buffet and captivating dances by students of Nritya Natya Kala Bharti, networking mixed with glances at the screening of New Delhi's Republic Day parade—complete with military displays and fascinating cultural presentations.