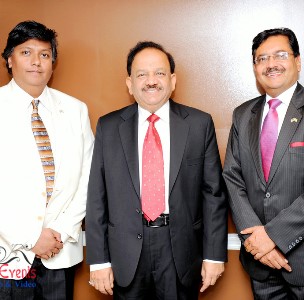 India’s veteran political leader Dr. Harsh Vardhan, now the Health Minister of the newly-formed Prime Minister Narendra Modi’s Government, had a whirlwind tour and visit of Atlanta. Responsible for actively eradicating polio from India and receiving the Polio Free ratification from the World Health Organization for India this March, Dr. Vardhan is engaged in developing and executing a cross-platform and multi-tiered comprehensive plan for resolving India’s health woes.

Having flown into the United States to participate in a multinational ‘Health’s Best Practices’ forum and to speak on a dais shared with nations like Ethiopia, Dr. Vardhan also had the opportunity to meet with the new U.S. Secretary of Health and Human Services, Sylvia Mathews Burwell.

Dr. Vardhan visited Atlanta with the purpose of spending a day at the nation’s iconic CDC (Centers for Disease Control and Prevention) to understand the operations of running a central health organization for a large nation and how it manages epidemics and serious bacterial threats and outbreaks. A day before his meeting with the CDC, Dr. Vardhan spent the morning of June 26, 2014 paying homage at the Gandhi Statue at the Martin Luther King, Jr., National Historic Site, as well as placing colorful wreaths at Dr. Martin Luther King’s and Mrs. Coretta Scott King’s crypts. At the King Center, Dr. Vardhan was received and felicitated by Ms. Barbara Harrison, who presented the Minister with a King memento. Later that evening he was received with a rousing welcome by invited guests at a dinner reception hosted by Ambassador Ajit Kumar, India’s Consul General for the Southeastern United States, at the Palace Restaurant.

At the reception Dr. Vardhan was honored by Atlanta’s various Indian-American organization leaders. In his address, he spoke of the landslide victory by Narendra Modi and his gaining control of both houses. He thanked the global Indian diaspora for their committed support which helped the election movement significantly. After a very long time India saw the emergence of a central government with absolute majority, not backed by minority support of several local governments at the State level. He spoke of counting on the cultural and traditional values that were incorporated in our medical systems in days past and which have been lost and forgotten over the years. He is not interested simply in reforming a medical fix, as healthcare is not just about going to doctors and hospitals for treatment, but he is actually engaged in reforming wellness promotion with emphasis on AYUSH (Ayurveda – Yoga & Naturopathy – Unani related to the four humours and the temperaments – Siddha related to three humours – Homeopathy). “We would like to develop a system of integration between the various systems because each one is complementary to the other.” Dr. Vardhan also spoke of the challenges he has inherited: about half of India’s children under 3 are underweight, nearly half of the population defecates in the open, and independent estimates suggest that millions of children die every year in the country from curable diseases. At the same time, the country has one of the lowest health expenditures in the world.

The Modi government, he stated, has an inclusive and holistic approach towards governance. Though it is the primary responsibility of the Health Ministry to take care of public health, it is interdependent on all the ministries who directly or indirectly, positively or adversely, affect an individual’s health. For example, sanitation and clean water is the responsibility of the municipal corporation and the Ministry of Housing’s duty is to ensure that people live in houses that are not congested. How can we ensure health for people living in unsanitary conditions? Furthermore he concurred that we can’t keep people healthy by simply providing more hospitals, doctors, and clinics. We need to convince the whole society, he said, that it is your own duty to keep yourself healthy, not just the elected leaders’ duty. We start with the young to become our goodwill ambassadors of motivating people to adopt healthy lifestyles; do some physical exercise, do some yoga, do some meditation every day, eat nutritiously, avoid tobacco and alcohol, and maintain fidelity.

Dr. Vardhan obligingly posed for photos with the attendees after dinner.