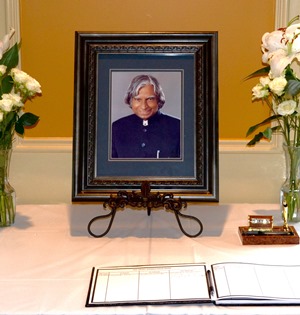 India American Cultural Association (IACA) organized a prayer meeting in honor of the former President of India and Bharat Ratna, Dr. A.P.J. Abdul Kalam, at the IACA auditorium on Thursday, July 30, 2015. The solemn homage ceremony was attended by several leaders of the Indian American community, representatives of past and present Board and Executive members of IACA, Sanatan Mandir, and members and graced by the presence of India’s Consul General in Atlanta, Hon. Nagesh Singh, and the President of Pakistan American Cultural Exchange, Iftikhar Sheikh. 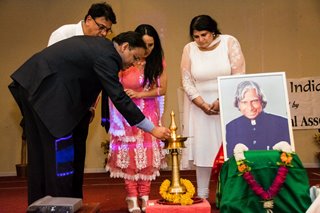 IACA President Vishwanath Ganti welcomed all, and video clips on Dr. Kalam’s life and notable accomplishments were shown on a large screen. Consul General Nagesh Singh was then invited on stage to light the diya, garland, and make floral offerings to Dr. Kalam’s picture.

In his eloquent homage Nagesh Singh said, “We have gathered on this solemn occasion to mourn the untimely departure of our popular leader and former President Dr. A.P. J. Abdul Kalam but at the same time to celebrate a remarkable life of a man who has become a pan-Indian icon. Dr. Kalam’s life and work was exemplary and would continue to guide and inspire us in the years ahead. For me two aspects were especially noteworthy amongst his various qualities. Dr. Kalam had transcended the various faultiness in India based on religion, caste, region, language, etc. to emerge as a national hero loved and admired by one and all. He set an example for us to rise above narrow divisions and to work for the glory of the nation and the good of the masses. Secondly, he negated the impression that we have in India, that to succeed you have to be kin and kith of someone important or come from a rich, influential family. Dr. Kalam, though being born in a modest family of a boat man, rose to the highest office in the land purely on the basis of his hard work, dedication, and pursuit of excellence. His life gives hope to the teeming millions in our country who come from the same milieu as Dr. Kalam that they can also reach the heights if they also work sincerely, with commitment and industry. His work in space, missile, and nuclear fields is well known but his commitment to transforming India, socially and economically, through spread of scientific temper among masses and use of science and technology to solve our societal problems is also an important and lasting contribution in the service of the country. His humility and accessibility even as President of India made him a much loved leader, which is amply evident in the outpouring of grief and tributes coming from all corners of the nation. As we mourn for our loss and also celebrate this truly exemplary life of selfless service, let us dedicate ourselves to carrying forward the legacy of Dr. Kalam by making our own contributions towards nation building and making India a modern, progressive, prosperous, and inclusive country. This then will be the real tribute to the departed soul.”

All stood up to observe a minute’s silence as a mark of respect for the departed soul of Dr. Kalam.

Sanatan Mandir’s priest Acharya Pramod Padhiji (left) began his prayer with Shanti Path, a mantra for peace, harmony, and happiness for all mankind. He followed it with reciting a few insightful slokas from 15th Chapter (Purushottam Yog) of the Bhagavad Gita, the most revered book in Hinduism. In his laudatory eulogy, he said that Dr. Kalam was a man of humility and simplicity, who despite being born in modest circumstances rose to the highest ad prestigious office of the President of India, through his commitment, drive, and passion for science and technology. “Today is Guru Purnima and in Sanatan Dharma, we pay respect to our gurus. Dr. Kalam was an exemplary guru who endeared himself with children and youth by igniting their minds with his teachings and inspiring writings. It is said that the best place to be is to be in kisi ke dil mein ya kisiki duaoon mein (in someone’s heart or in someone’s blessings.) Dr.Kalam, you will remain alive in our hearts forever.”

Recalling one of the episodes, he said that when Dr. Kalam was travelling to Shillong by car, he noticed that a soldier who was providing him security was standing in a jeep. He requested that the soldier be hinted to sit down. But it didn’t work. Upon reaching Shillong, Dr. Kalam greeted the soldier, “Thank you buddy. Are you tired? I am sorry you had to stand so long because of me.”

Bhai Karnail Singh ji (right) of Guru Nanak Mission Society of Atlanta in Norcross, GA paid glowing tribute to Dr. Kalam ji by telling a story from the life of Guru Nanak wherein Guru Nanak had taught that to be in public life and lead people on the path of righteousness is more important than being an ascetic. Dr. Kalam followed that to the hilt. Bhai Sahib then led the congregation in a prayer (ardaas) for the departed soul of Dr. Kalam which is also a prayer for the wellbeing of the entire world regardless of their religious affiliation.

Rev. Younis Farhat (left) began his eulogy with a quote from the poet Longfellow,
Lives of great men all remind us
We can make our lives sublime,
And, departing, leave behind us
Footprints on the sands of time;
Footprints, that perhaps another,
Sailing o'er life's solemn main,
A forlorn and shipwrecked brother,
Seeing, shall take heart again.

Dr. Kalam, popularly known as “The People’s President,” has left a legacy, and many may try to follow his footprints but his shoes will be very difficult to fill. He gave courage and hope to poor and downtrodden. He was a gentleman and a global leader. You can see reflection of his life in the Lord’s Prayer, said Rev. Younis. He requested all to stand up as he recited the Lord’s Prayer.

Dr. Wasi Siddiqui (left) said that after the sad demise of Dr. Abdul Kalam, a very renowned poet of Urdu in India composed a poem in honor of Dr. Kalam. He read a few stanzas from the poem and later a summary in English, “The Indian nation is mourning its loss. The departed leader was a glowing star and a great pride of society. He was the pulse of the nation. Friends and foes alike are saddened by his passing away, and are glorifying his achievements. He was bestowed with honors but those well-deserved honors were late in coming.” “Diplomacy and knowledge has been your hallmark. The country is proud of your inventions in missile technology. Hon. Abdul Kalam, we respectfully salute you. Your name and legacy will always remain alive in our hearts and minds.”

Likewise, Facebook and all social media were abuzz with tributes to President Kalam. Chairman of the Gandhi Foundation of USA (also former President and chair of IACA) Subash Razdan who also was present at the prayer service, wrote on Facebook, “Fresh after the dip in the ocean and the pilgrimage to one of the holiest of the Char Dham's Ramnathaswamy Temple (in the Gulf of Mannar at the tip of Indian Peninsula connected through Pamban bridge from where reportedly Lord Rama built the Ram-Setu/Adams bridge to Lanka with his Hanuman Sena), he (Razdan) was extremely fortunate to pay his own chance homage to the legendary Kalam earlier in January 2015 when he physically visited the Higher Secondary school where the President studied and also the famous "House of Kalam" in Rameshwaram." "What a coincidence that the world's greatest Karmayogi of Muslim origin, a true nationalist, humanitarian with compassion, would be born in one of the holiest Hindu places in India," Razdan added.

After Ganti moved a vote of thanks, all were treated to delicious mahaprasad. 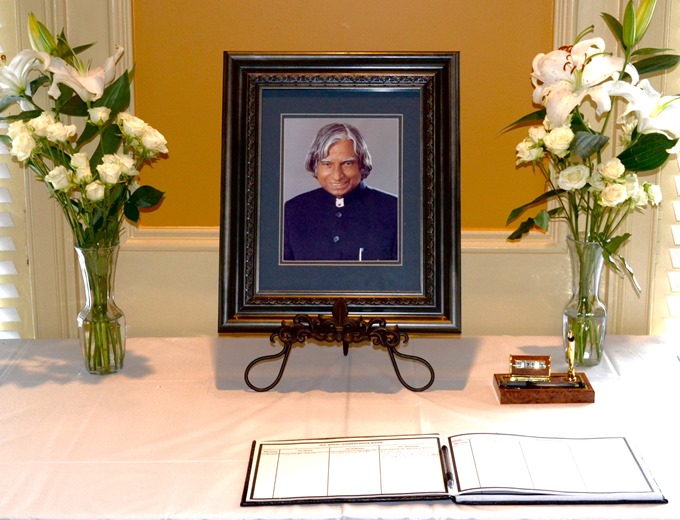 The book of condolences at the Consulate of India in Atlanta. (Photo: Mahadev Desai)

1) The Consulate General of India, Atlanta, offered a book of condolences on Dr. Abdul Kalam's death that the public could come to write in.

2) Not long before his passing, Dr. Abdul Kalam had written a book titled Transcendence: My Spiritual Experiences with Pramukh Swamiji and had presented it to the Swami. The book covered Dr. Kalam's 14 years' experiences with His Holiness Pramukh Swami Maharaj.
Transcendence is divided into four parts.
The first describes Dr. Kalam’s interactions with Pramukh Swamiji.
The second part highlights some of the outstanding work and values of BAPS Swaminarayan Sanstha, as inspired by Pramukh Swamiji.
The third discusses the correlation between science and spirituality through the anecdotes and thoughts of leading scientists (Pythagoras, Galileo Galilei, Albert Einstein, Gregor Mendel, Baruch Spinoza, Srinivas Ramanujan, Jagdish Chandra Bose, Subrahmanyan Chandrashekhar, and Francis Collins), and
the fourth reflects on the ideals of creative leadership based on the lives of leading historical luminaries (Nachiketa, Abdul Qadir, Abraham Lincoln, Thiruvalluvar, Mahatma Gandhi, Nelson Mandela, the Dalai Lama, Vikram Sarabhai, and Varghese Kurien).