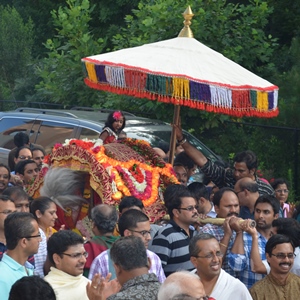 The palki (palanquin) procession around the temple.
(All Photos: ByteGraph Creations)

Thousands of devotees thronged to the Shirdi Sai Temple of Atlanta in Suwanee, Georgia to offer their prayers and seek Sai Baba’s blessings at the joyous and spiritually suffused Guru Purnima celebrations on Saturday, July 12, 2014.

Shirdi Sai Temple celebrations began at 5:45 am with Kakad Aarati, the ceremonial awakening of the Lord. Following this, the Nava (9) Kalasa sthapana was performed invoking the lord in the form of energy into the 9 kalasas (pots). The ritual was performed by priests Srinidhi Kadambi and Amol Kulkarni, in the presence of hundreds of devotees who had turned out for an early darshan of Sainath; the priests then performed the havan (sacred fire ritual) in the name of Lord Sainath, Ram Parivar, and Shiv Parivar. 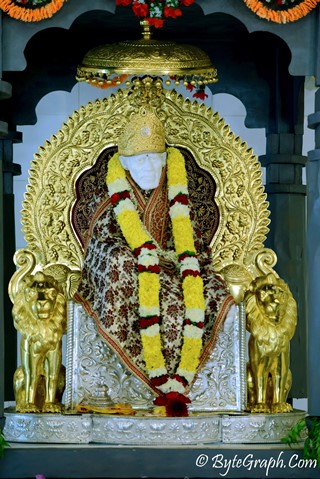 (Left) The larger than life statue of Shirdi Sai Baba.

Around 9 am, the priests gave abhishek (ceremonial bath) to the larger than life statue of Shirdi Sai Baba along with the utsav murthy and the padukas (special sandals). The hour long ceremony with Vedic chants energized the whole sanctum and the devotees present.

While the main sanctum was being decorated as a replica of the Guru Sthan in Shirdi, India (which represents the place under the neem tree where Saibaba meditated), singers engaged the audience with uplifting bhajans.

Around 11 am, the priests performed abhishek to Lord Dattatreya. Shirdi Saibaba is considered an avatar in the lineage of Lord Dattatreya. Upon completion of the ceremonial rituals and decorations, the noon aarati was performed. By about 1 pm, approximately 1,000 people had already made Sai Baba’s darshan.

Around 3 pm, more than 100 families participated in the community sai vrat. Sai vrat is similar to satyanarayan vrat where the 9 governing planets, ashta dikpalakas (rulers of the 8 corners), and the five presiding deities are invoked along with Lord Sainath. As an added feature this year, the 52 week sainath paduka puja was also performed. 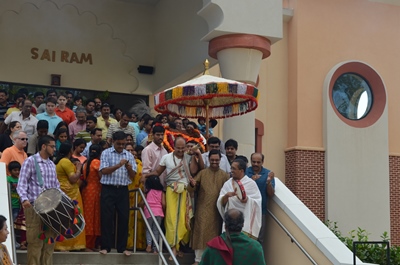 (Left) Ready for the procession.

The dhoop aarati at 6 pm was followed with palki seva. Devotees enthusiastically sang and danced to the loud beat of the drums throughout the palki (palanquin) procession around the temple while dazzling firecrackers lit up the sky.

The significant part of the elaborate rituals of Guru Purnima is Guru pranam – the act of submitting oneself to a guru and touching his feet in respect. Chapter 22 of Sai Satcharitra says “How to meditate on Baba? No one has been able to fathom the nature or the form of the Almighty. Even the Vedas and the thousand-tongued Shesha are not able to describe it fully; but the devotees cannot but know and look at the form of the Lord, for they know that His Feet are the only means of their happiness. They know no other method of attaining the supreme goal in life, except meditating on the Holy Feet.” 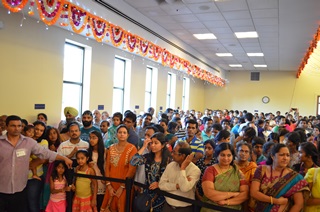 More than 2,500 people visited the temple between 7:30 and 10 pm to do Guru pranam. The Temple had courteously arranged for a separate lane for convenience of senior citizens, pregnant women, and families with infants.

The temple kitchen served delicious maha prasadam to all from 11 am to 11 pm. Volunteers efficiently and cheerfully managed the parking lot throughout the day. More than 100 volunteers worked ceaselessly to help in the sanctum, kitchen, and parking areas to ensure that devotees had a smooth and safe darshan.

The joyous celebrations concluded with community archana on behalf of the entire local community, followed with shej (bedtime) aarati at 10:30 pm. 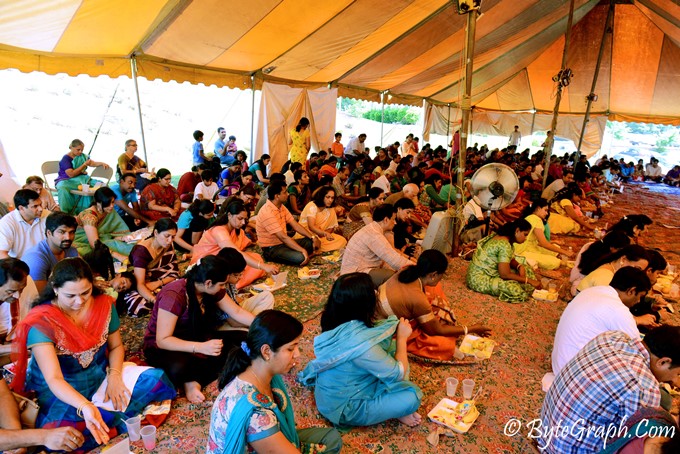