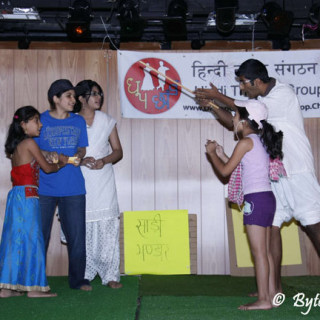 For the very first time, the Atlanta South Asian community observed fun-filled theatrical performances, including dances, drama, comedy, etc., presented by junior actors of Natkhat Rangshala. The idea of providing such a unique platform for kids of all ages and origin was conceived and directed by Mrs. Sandhya Bhagat, the founder and director of Dhoop Chaon Hindi Theatre Group of Atlanta.

Dhoop Chaon has given performances of skits, comedies, emotional dramas, and dance dramas at various community events such as IACA's Festival of India, the Diwali Celebration at Centennial Park, Star Talk Hindi Language Summer Camp, and more. It has also conducted its own annual family variety show for the past six years at Emory University and Berkmar High School. Maintenance of connection to culture and language has been part of the focus. 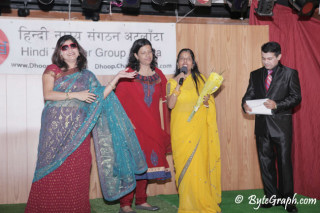 This time a new direction for the theatre group emerged as kids of all ages were invited to come learn Hindi/Urdu and perform under the banner of Dhoop Chaoon's Natkhat Rangeeley. Preparations for the show began about four months ago, when the director sat head down day and night writing script for the short plays and coming up with the program. She collaborated with many community artists and teachers for the kids: Rahim Hussain for dance, Lakshmikant Pandya for mime/acting, and Apurva Shrivastava for song.

Natkhat Rangeeley was held at Fusion Event Hall on October 14, 2012. The program began with the kids coming in small groups, greeting the audience and giving their introduction in a very unique style reciting poems, dohas, tongue twisters, street games, riddles, or muhavra in Hindi. All the natkhat rangeeley then sang the popular motivational song “Hum Honge Kamyab.” Renu Thapiyal and Rahim Hussain in their role of co-hosts kept the audience laughing. The short plays “Beech Ki Lakeer”(based on the conflict between parents and teenagers) and “Aalsiyon ka Shahar” were not only hilarious but also conveyed a strong moral message. The kids and John Chacha (Apurva Shrivastava) then sang popular Bollywood songs with twisted words. They narrated the old folk tale "Lomri aur Kauaa." Last but not the least, the stage was on fire with the beats of “Om Shanti Om” from Bollywood movie Deewangi as all the participants were joined by parent volunteers. These kids were amazingly cute and confident on stage!

Dhoop Chaoon thanked the parents who did so much, and the sponsors: grand sponsors Dr. Nazeen and Shamim Dalwai, and supporters Venket Gaddam and Jawahar Mohammad. 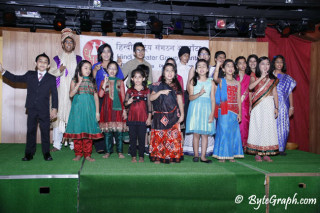 The kids ranged in age from 6 to 18 and were of different origin. In their words, their experience was fun, enjoyable, interesting, and educating. Kids learned many new words, sentences, numbers, etc. in Hindi and Urdu. They made friendships that they can continue in further workshops in this new unique Hindi/Urdu acting school for kids, Natkhat Rangshala. Classes will be held every fortnight at Fusion Event Hall, with each session 3 months long, beginning Dec 2nd. Who knows who out of these kids will become the next Shah Rukh Khan or Kareena Kapoor!

As Natkhat Rangeeley says, “Who says, we are ABCDs, American Born Confused Desis? With Mrs. Bhagat we will be ‘American Born Creative Desis!’”