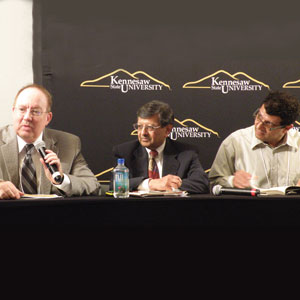 “China has to improve its governance in order to sustain its economic growth in the world; otherwise it will become stagnant in the future,” said Dr. llan Alon, Cornell Chair of International Business at Rollins College, FL, and author of 24 books on China.

China has transformed from a Communist backwater into a rising industrial tiger along with India, Dr. Alon added, as he spoke to a 200-odd audience in the Symposium on Asia-USA Partnership Opportunities (SAUPO), organized by Kennesaw State University and held at the W Atlanta-Midtown Hotel on April 8, 2011.

Good governance includes respecting its citizens’ rights and obligations. For instance, Dr. Alon told the audience that China has the largest number of road fatalities caused by driver error despite the low number of passenger cars compared to the USA.

India is also in yellow: bad governance, a flawed miracle. One factor is uncontrolled corruption. Despite this, India’s growth rate is only second to China. Dr. Jagdish Sheth, Professor of Marketing at the Goizueta Business School of Emory University, said that India and China must continue to expand bilateral trade with the USA. The new triad power (India, China and USA) has replaced the old triad power (Japan, Europe and USA). “India’s growth rate will accelerate after 2020 as it continues to invest in its infrastructure and continue to work to reform. The USA needs to become more Asia-centric. Invent here and market there, should be the mantra.” Dr. Sheth continued, “India must create incentives for entrepreneurs, privatize her ancient public-sector companies and attract foreign investment in textiles, steel, power and telecommunications.”

Agreeing with these sentiments was Keynote Speaker Patrick Santillo, Commercial Service Regional Director for Asia Pacific at the U.S. Dept. of Commerce. “Asia is the future and vice-versa. We have set up a National Export Initiative to promote U.S. exports and we are continuing to improve our bilateral trade with Asia.”

Leading the way in the first session, Sandeep Dadlani (VP Infosys, which has an office in Atlanta), said they get 70 percent of sales from the U.S., but have also begun to recruit more personnel here who know the culture in which they work. Conversely, an Atlanta company already in China and India is tvsdesign; Roger Neuenschwander, President, said their foray into China has been a learning curve. “Our American style of doing business had to be changed. From 100 drawings we had to reduce to just 10 drawings. We had to be decisive, bold with our Chinese partners, and projects had to be completed quickly.”

Global commerce is what Jorge Fernandez, Vice-President of the Metro Atlanta Chamber of Commerce, knows best. “We are keen on attracting Asian businesses here in Atlanta; it’s about creating jobs. 2,500 foreign companies employ about 180,000 Georgians here.” Japanese companies led the first wave of Asian investment, followed by Korean and then Chinese and Indian. “It is also important that the US-Korea Free Trade Agreements happen now,” Fernandez told his audience.

Companies must take into account Asian cultural sensitivities when marketing products. Rising consumer nationalism in China is being directed against Western and Japanese imperialism. Dr. Hongmei Li, Assistant Professor of Communication at Georgia State University, said that in 2003, ads appeared in the state-owned Chinese magazine Auto Fan, one showing a stone lion saluting and another kneeling down for a Toyota Prado with the slogan, “You cannot but respect Prado.”

Those ads caused great controversy among Chinese consumers and Internet users. The stone lions are traditional symbols and were seen as being treated in a demeaning manner by the Japanese car maker. Historical anti-Japanese sentiment runs deep in China. The whitewashing in Japanese textbooks of the Nanjing massacre and the territorial dispute over Diaoyu Islands among other things have stirred the hornet’s nest among Chinese Internet users, who are largely nationalistic.

“A boycott of Toyota was called for, causing the ads to be pulled. But when Nike’s ad featured LeBron James defeating dragons, another holy, powerful and inviolable Chinese symbol,” Dr Li said, no threat of boycott came from the Chinese nationalists. The ad was still pulled out of respect. “Foreign companies must pay attention to Chinese nationalism when doing business there,” Dr Li said.

Ending on a note of optimism, SAUPO’s organizer Rifka Mayani said, “SAUPO was organized to bring together the movers and shakers in the business community and the academic experts. It is also important to train young people with the real concepts of doing business in Asia.”