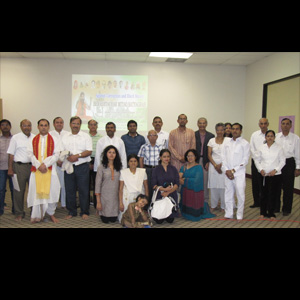 On Saturday, June 4, 2011 from 9am to 7pm at the Global Mall in Norcross, many of Atlanta’s Indian community came together to support Indian yoga guru Baba Ramdev’s “Time for Action” Solidarity and Fast. Cosponsors were members of the local Atlanta Chapters of the Bharat Swabhiman Overseas and the Friends of India Society International groups. The event included a documentary on corruption by Late Shri Rajiv Dixit; presentations on corruption, GATT agreement by Bharat Somal and Dhiru Shah; and a yoga session by Nagesh and Madhavi Kasam.

Guru Ramdev was joined by over 200,000 citizens of India at the Ramlila Ground in New Delhi on June 4 to protest against the corruption with an indefinite fast. The government applied a crackdown on Baba Ramdev and peaceful protesters at 1am on June 5.