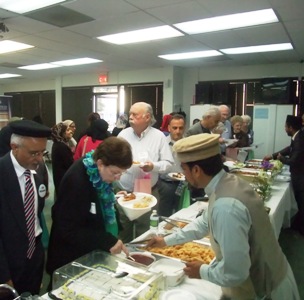 Guests explore new foods as well as new understanding of history and attitudes at an interfaith meeting.

In a response to the Prophet Muhammad being portrayed in a negative light, the Ahmadiyya Muslim Community held an interfaith meeting at Baitul Baqi mosque on Saturday, March 16, 2013 to explain why Muhammad is the Messenger of Peace. Since the Community’s belief is that jihad (the spiritual struggle within and without against sin) has nothing to do with swords, the website www.Muhammadfactcheck.org was provided as an educational resource.

The program began with a recitation from the Quran. Osama Rehman, a high school student from Cobb County, translated. President Hazeem Pudhiapura welcomed guests who came to listen, question, and discuss.

Dr. Muhammad A.K. Nuri presented a video on the history of the Community and its focus on peaceful self-reformation. The video also summarized the Community’s work, including translating the Quran into 60 languages and building 15,055 mosques, 510 schools, and 30 hospitals around the world to help people of all faiths through justice and nonviolence.

The Muslims for Peace blood drive was described, which was begun to counter the negative post-9/11 image of Islam and Muslims. The Community organized the drive to help save 10 times the number of lives lost in 9/11. The President gave credit to Georgians who participated, adding that asking for blood was a hard sell, but helped to change the hearts of many.

Mr. Mahmood Ahmad spoke about the life of Muhammad, saying that before, women had no rights, girl children were killed, and tribes fought each other, but that Muhammad changed these barbaric activities. Irish playwright George Bernard Shaw had called Muhammad “the Savior of Humanity.” Mr. Ahmad noted that women have had to demand every right they have ever received, and no man ever volunteered those rights until Muhammad wrote a Charter of Women’s Rights—and also declared that all races are equal and each person should be judged by his level of righteousness, not by any other measure. Muhammad's mud hut, humility, and reputation for honesty were described. 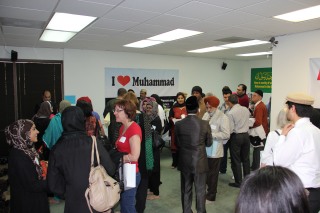 Mr. Qamar Zafar and Mr. Ghayyur Khan spearheaded the question and answer session. One guest asked, “How are Ahmadi-Muslims different from other Muslims?” “The answer lies in the leadership of the community, the caliph Mirza Masroor Ahmad. Secondly, other Muslims believe in jihad of the sword, because their clerics have told them this, but Hazrat Ghulam Ahmad proclaimed that the jihad of the sword was dead and the job that lay ahead for Muslims would be to explain Islam or purify themselves.” The predicted time when Muslims would become “the worst of creation” was declared to be here, since Muslims who kill in the name of religion do not comprehend aright.

Guests included members of the Methodist church, who requested more interfaith events with the Community; other guests came from humanitarian organizations. Each guest received an educational gift. The event ended with a silent prayer, after which refreshments were served. One guest exclaimed, “You have outdone yourselves.”