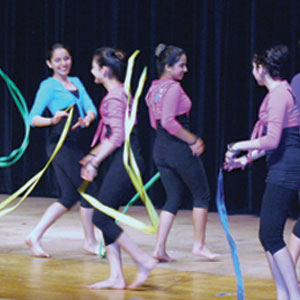 On May 8th, 2011, NaachFusion, Georgia’s South Asian fusion dance academy, conducted its 2nd annual dance recital in Johns Creek, GA. It was a pleasant surprise for most mothers who were seeing their children perform for the first time on Mother’s Day. Indian and some non-Indian students ranging in age from 4-45 performed Bollywood numbers with choreography inspired by fusion dance styles including Bharatanatyam, semiclassical, hip hop, contemporary, and jazz.

The opening act, a prayer to the song “Iktara,” was performed by Sonia Seernani, founder and Director of NaachFusion Dance Academy. The 6-8 yr-old girls’ class performed a semiclassical piece to “Mere Dholna” and “Chhan Ke Mohalla.” Their vibrant lenghas and rosy cheeks glittered on stage as parents took pictures of their children, some of whom were new to the stage. Diversity was added with piano pieces by students from the local music academy known as Studio! founded by Archith and Ashwin Seshadri. The piano performances really brought the fusion vision of the recital to life as the students played Indian and Western songs, including both American and Indian national anthems.

The second half of the dance recital captivated everyone’s attention as it embodied the students’ Western culture fused to South Asian music. The mothers’ class presented a dance piece to the song “Darling” with Russian and Irish influenced choreography, and the teenage boys with their slick black suits, ties, and fedora hats performed to “Usher.” The largest and most experienced group performing was the teenage girls’ class. From semi-classical to hip hop, the girls displayed grace and versatility. They even pulled off a number by Enrique Iglesias fused with an elegant Chinese Ribbon dance to the song “Udi” from the film Guzarish. The most anticipated dance was towards the end as the 4-year-olds melted everyone’s hearts during their glitzy and upbeat performances, including Bollywood numbers like “Twist,” “Ainvayi Ainvayi” and their jazzy take on “Anjaana Anjaani!” Their colorful fusion costumes reminded everyone of the glamorous films they have recently seen. The show came to a conclusion with a slideshow compiled by NaachFusion as a surprise for its family of students and parents. It included photos and videos of the journey NaachFusion took to prepare its students for the year-end performance, bringing tears to many parents’ eyes.

When asked how they felt about their past year with NaachFusion, Sameer Mahtani from the teen boys’ class replied, “NaachFusion is a great experience for anyone of any age.” Mother of two daughters in the kids’ class, Neelu Kalra, exclaimed, “NaachFusion gives personalized attention and encourages constant dance practice at home, while also teaching different styles of dance. There has been a tremendous increase in my daughters’ grace and confidence!”

NaachFusion was founded in 2009 by young entrepreneur Sonia Seernani at the age of 23 and has grown tremendously over the last year and a half with two locations. Although Sonia has a full-time career in banking, she has been able to capture the interests of the youth in Georgia by providing them a platform in the performing arts and developing confidence in their Indo-American culture. NaachFusion’s vision is to see every Indian child born in the U.S. actively participate outside of school and social events in some form of cultural activity such as music and dance.