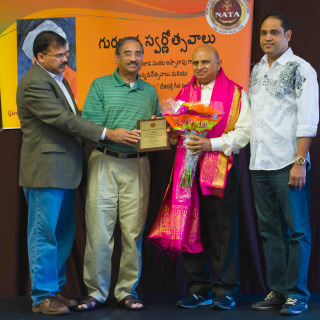 NATA Atlanta celebrated the 150th birth year of the famous Telugu poet, radical thinker, and social reformer, Shri Gurajada Apparao. The event was held on Saturday, November 03, 2012 at the spacious banquet hall of Brindavan Restaurant in Alpharetta, GA. More than 250 people attended and thoroughly enjoyed the entertaining literary and cultural festival that marked this joyous occasion.

“Maha Kavi”Gurajada, as he is famously known, was unique in many ways. This included his deep empathy for the underprivileged, his strong desire to bring about social awareness through his poetry and plays, and his revolutionary style of employing the spoken Telugu script to produce plays that stirred the conscience of the literate and illiterate alike.

While many Telugu organizations across the USA hold Gurajada in high esteem, NATA Atlanta is the first of its kind in the USA to present such a cultural event in his memory and honor. The program began with the traditional “Jyoti Prajwalana,” followed by reminiscences of Gurajada and his works and the inspiration that members drew from them.

A fantastic surprise was in store for the audience, when Bala Indurti informed them that the great-grandson of Gurajada was among them in Atlanta all along. This little known fact came richly into light, with the revelation from Shri Oleti Rao garu, one of Atlanta’s literary giants and a respected scholar. Rao garu shared memorable experiences of his famous ancestor to a spellbound audience and in his gentle tone and rich language, gave a singular perspective of one of the greatest Telugu literary giants of all times.

Melodious songs kept the audience entranced and several among the audience actively came forward and shared their respect for Gurajada. Gurajada’s famous “Desa Bhakti Geetalu,” including the literary masterpiece “Desamunu Preminchumanna” were sung with patriotic fervor by the group from Amrithavarshini that included many young children. Atlanta can truly take pride not only in the current wealth of literary talent, but also in the talented youngsters who have been carefully guided by parents and teachers to preserve our rich cultural values and pursuit of excellence.

“Puttadi Bomma Poornamma”will remain forever in the hearts of Telugu people, as one of the most touching works of art from Gurajada. Phani Dokka shared his poetic creation, inspired from this masterpiece. There was not a dry eye in the audience, as Phani combined his rich baritone and gentle splash of words to provide an enchanting view of the epic saga.

NATA is truly proud to have so many people who treasure our culture and traditions in their midst. On behalf of NATA, awards were presented to team members who had been instrumental in making NATA a household name in the Southeast region.

A day to remember Gurajada and his contributions became, in turn, a day that created many fond memories for the Telugu community in Atlanta.