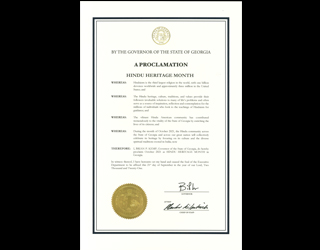 After many other states, Georgia too has issued the proclamation declaring October as Hindu Heritage Month. Governor Brian Kemp issued the proclamation for the state on September 21, 2021. The inaugural ceremony was held on October 1st with several speakers emphasizing the need for Hindu Heritage Month to spread awareness about Hindus, Hinduism, and the all-inclusive culture inherent in Hinduism.

Representative Buddy Carter in his speech at the U.S. House, as he read the proclamation, said, “Madam Speaker, I call upon my colleagues to join me in recognizing October as Hindu Heritage Month. To those celebrating, I wish all a joyous celebration of Hindu Heritage Month 2021.”

The proclamation reads, “Hinduism is the third largest religion in the world with one billion devotees worldwide and approximately three million devotees in the United States; The Hindu heritage, culture, traditions and values provide their followers invaluable solutions to many of life’s problems and often serve as a source of inspiration, reflection and contemplation for the millions of individuals who look at the teachings of Hinduism for guidance; The vibrant Hindu American community has contributed tremendously to the vitality of the State of Georgia by enriching the lives of its citizens; During the month of October 2021, the Hindu community across the State of Georgia and our great nation will collectively celebrate its heritage by focusing on its culture and the diverse spiritual traditions rooted in India.”