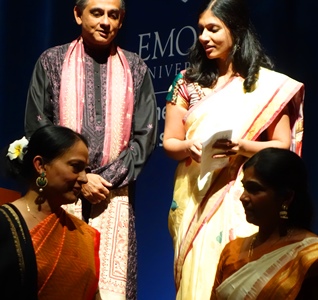 Malavika Sarukkai and Sasikala Penumarthi, followed by Sumantra Ghosal and Harshita Kamath, after the presentation and discussion of The Unseen Sequence at Emory University. (Photo: Suzanne Sen)

Malavika Sarukkai is a dancer and choreographer based in Chennai, and is widely considered the most accomplished Bharatanatyam performer today. Sumantra Ghosal is a filmmaker who has turned from a career in advertising to working on documentaries and then to documenting the arts. Put them together, and with both on a quest for excellence and both pushing boundaries, the result is stunning.

The film The Unseen Sequence: Exploring Bharatanatyam through the Art of Malavika Sarukkai premiered last year and was shown at Emory University on October 5, 2014. As the annual Sheth Lecture in Indian Studies, both Sarukkai and Ghosal were there for conversation with the audience and to be interviewed by Sasikala Penumarthi and Harshita Kamath. Penumarthi is known in the community as a premiere artiste, founder of the Academy of Kuchipudi Dance, but she is also a recipient of the Master Artist award from the Georgia Arts Council and the National Foundation for the Advancement of the Arts, and is an Artist Affiliate and Associated Faculty of Emory University. Kamath is a Visiting Research Scholar at Middlebury College, one of America's top liberal arts colleges.

Sarukkai is seen dancing at Chidambaram Temple—not in a performance for an audience, but letting go of her image, feeling as if in a womb, in darshan, in a performance for God. Such dance is no longer legal in India, as devadasis were banned after Independence. Sarukkai and Ghosal could technically have been arrested, we were told. But the dance is incidental to devotees, Saurkkai explains: it is part of a long, infinite sequence, a contemplative form in which the dancer asks Where am I going? In what direction?

Later we see Sarukkai developing her art, going from traditional ways of dancing items to imagining more into the stories, adding details that act as metaphor to expand the questions and bring current relevance: adding a bird in a cage, for example, to ask Who is the bird? What is the cage? What is the price of love?

Sarukkai’s life is shown and the history of Bharatanatyam and various dancers described, especially focusing on those who powerfully envision, feel, and emote the stories for the audience. Sarukkai’s precision and eloquence in her field is reminiscent of Audrey Hepburn’s in hers. Giving us an understanding of her experience, “the harmony of body and mind,” Sarukkai says, (or later, “when the I is not on center stage”) “is ecstasy.”

A tribute to Sarukkai and to dance, to creativity and tradition. 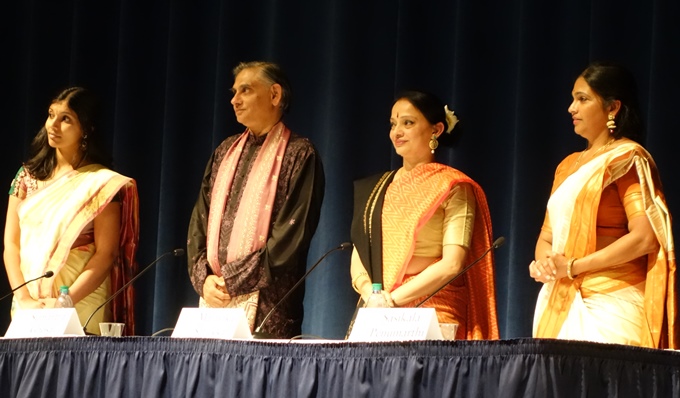 Harshita Kamath, Sumantra Ghosal, Malavika Sarukkai, and Sasikala Penumarthi taking questions from the audience at their panel discussion of the film The Unseen Sequence at Emory University. (Photo: Suzanne Sen)

Videos:
The Unseen Sequence | Official Trailer | HD
CinematixFilms
Published on Aug 6, 2013
In Malavika Sarukkai - an artist rooted in tradition but with a uniquely contemporary sensibility - one of India's most profound classical arts, Bharatanatyam, is being re-interpreted, renewed, invigorated.

Correction: The print/digital issue of Khabar states, "(An interview with Malavika Sarukkai and Sumantra Ghosal also appears elsewhere in this issue)"--however, the interview has been postponed to a future issue.