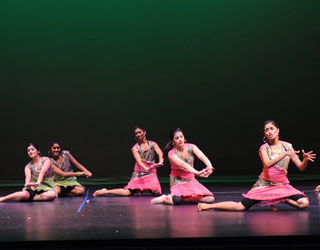 Planet U Performing Arts delivered a magnificent recital at the Gwinnett Performing Arts Center on November 18th. The program started with Planet U’s signature dance on Lord Ganesha, followed by Bollywood Dhamaka in which students showcased their prowess with an explosion of hip hop, jazz, filmi fusion, folk, and bhangra-style dances choreographed by Uma Murlidhar, Director of Planet U Performing Arts.

Next came Uma’s Indian cinema-style dance drama, “Pyar Ka Safar,” about a family separated by a villain who is a close friend to the family. The drama was a fantastic depiction of love, jealously, separation, suspense, drama, comedy, and reunion in typical Bollywood masala style. Uma creatively intertwined 35 fast-paced songs into the storyline to produce a musical with great dancing, drama, and colorful costumes.

Planet U, an Alpharetta-based dance company, showcases the talents of its students in annual recitals and has usually donated the net proceeds of the event to a charitable cause. This year the proceeds from the recital went to Ekal Vidyalaya, a non-profit organization that empowers children in rural and tribal communities in India through education. At the event, Rachna Gupta from Ekal Vidyalaya gave an inspiring speech about their innovative one-teacher school model that runs on a shoestring budget of $365 a year.