To express appreciation for its “Dollar a Day” members, the Sanatan Mandir of Atlanta (formerly known as ICRC temple) hosted an Atlanta premiere of the heart-tugging, modern Gujarati movie, Saptapadii. The movie was screened at Lefont Theater in Sandy Springs, on Sunday, June 2, 2013.

The popular and critically acclaimed movie has a special history. Amitabh Bachchan, the brand ambassador of Gujarat tourism, is promoting Gujarat’s rich culture through outstanding movies like this one, which was produced by Bachchan’s ABCL Corporation in association with Saraswati Creations and Splash Productions.

“Sadly there are very few outstanding Gujarati movies,” lamented Dr. Prakash Desai of the Trustees and Board of Governors of the Mandir, prior to the screening of the movie. “Compared to Bollywood, Gujarati movies are few in numbers and rather poor in their overall appeal.” From his past experience of watching Gujarati movies, he said, he had been skeptical about Saptapadii, but after watching it in New Jersey, he was so impressed that he decided to screen a show in Atlanta. He said that the movie is doing extremely well not only in India but worldwide. “In Mumbai this movie has shown for twelve weeks in a row! It is gaining in popularity in the U.S. also through promotion by TV Asia, the Share and Care Foundation, and screenings by Indian-American organizations. It should be a matter of pride that Boston resident Chandrakant Shah has written the screenplay and dialogues along with Kajal Oza Vaidya and Niranjan Thade, who has also directed the movie. … [T]hings are changing and under the encouragement and support of Gujarat Chief Minister Narendra Modi, good movies are round the corner.” 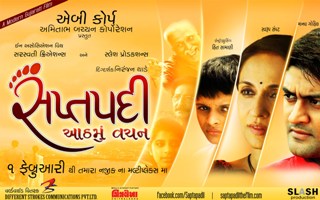 The title saptapadii means seven vows taken by a newlywed couple during a Hindu wedding ceremony. Siddharth (Manav Gohil) and Swati (Swaroop Sampat) are a wealthy and happily married Gujarati couple in their forties. To celebrate their 20th wedding anniversary they go to breathtaking scenic Saputara hill station, with a spectacular waterfall, a beautiful lake surrounded by lush hills and green trees. Swati meets a nine-year-old orphan boy Mohsin (Heet Samani) who is under a doctor's care because of his fear, tantrums, and occasional violent acts to express his anger and frustration. Swati wants to help him and goes to the doctor (Utkarsh Mazumdar), but both he and the police advise her to stay away from the boy. Her husband, obsessed with his business, agrees, and after intense arguments with Swati, leaves her. Their daughter tries to bring her parents together, and Swati’s determination brings about a slow change in Siddharth’s thinking: a businessman has to be sensitive and responsible to the society around him. Even some of his board members stress corporate social responsibility (CSR) as a moral obligation.

Why was Mohsin so fearful? Why did the police warn Siddharth and Swati to keep away from Mohsin? Was Swati able to cure Mohsin? Was there a happy ending? Watch the movie to find out!

Saptapadii is entertaining, informational, and has a message of giving back to society. Not only corporations but well off individuals can dig deep and support worthy outreach initiatives. The movie has English subtitles. It is sensitive to women's issues. So far it has been screened in seven major festivals, including Mumbai and Jaipur, Canada, Australia, New Zealand, and Japan (first ever public screening of a Gujarati movie here) 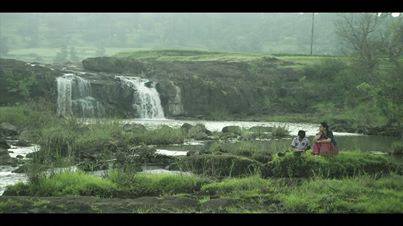 Theater, TV, and film actress Swaroop Sampat is also a model who won the Miss India title in 1979. She was a perfect fit for the role of Swati, as she went to Worcester, UK. for a Ph.D. in training teachers in helping dyslexic children through drama. Her work has been with disabled and tribal children in Gujarat. She has given a magnificent performance. Kudos also to TV actor Manav Gohil and child actor Heet Samani in his brilliant debut role.

Chairman of the Board Bipin Changela thanked Dr.Desai for initiating the “Dollar a Day” program to generate funds for temple services to the community. Due to the economic downturn there was a slowdown in the temple project, but now the plans are almost back on track. Changela noted that 49 members had enrolled in the program just before the screening of the movie and ten new members enrolled immediately thereafter.