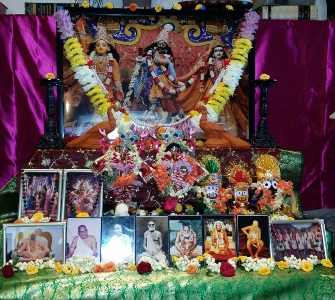 Gaudiya Vaishnava Association celebrated the Appearance Day of Lord Shri Krishna Chaitanya with great fervor and joy on March 5, 2015. The next day was celebrated as Shri Jagannatha Mishra Ananda Utsava. Shri Chaitanya Mahaprabhu is the Supreme Person, Lord Shri Krishna Himself, who took the mood and complexion of Shrimati Radharani in the form of His own devotee and appeared in Shridhama Mayapur, West Bengal, in 1486.

He appeared in this world to spread love for Shri Krishna through the congregational chanting of the holy names of the Lord and to extinguish the demoniac nature of the people. In this Kali-yuga, Lord Shri Krishna’s direct incarnation is Lord Shri Chaitanya Mahaprabhu. This is also confirmed throughout the Vedic literature—Mahabharata, Puranas, Upanishads & Vishnusahasranama. The essence of all Vedic literature is the Srimad-Bhagavatam (11.5.32) where Lord Shri Chaitanya Mahaprabhu is accepted as the Supreme Lord.

Guests offered flowers to the deities when they entered the event hall and received the mercy of Shri Shri Gaura Nitai. A full hour of Harinama sankirtana (the congregational chanting of the holy names of the Lord) enthralled the guests and enlivened them. The next event was Tulasi arati, performed to Mother Tulasi Devi with the Tulasi arati song rendered beautifully, after which all the devotees, guests, and children got the opportunity to circumambulate Her.

(Left) Participants in the play, “Liberation of Sarvabhauma Bhattacarya.”

Next, children from the congregation, with wonderful costumes, performed an enlightening drama to the delight of all present: “The Liberation of Sarvabhauma Bhattacarya” based on the pastimes of Lord Shri Chaitanya Mahaprabhu at Shridhama Jagannatha Puri.

Finely decorated cake, pushpanna (Bengali Royal Rice), halwa, vada, saag paneer, puri, and peas sundal were offered as bhoga to their Lordships. At the end guru arati and sandhya arati (Gaura arati) were elaborately performed. The attendees thoroughly enjoyed the program by jubilantly singing in the kirtans and dancing during the arati. The program came to an end with a sumptuous dinner prasadam that included puri, gulab jamun, pulao, kofta curry, paneer curry, cake, saag paneer, vada, halwa, and pushpanna, served with lots of love.

"In the age of Kali, intelligent persons perform congregational chanting to worship the incarnation of Godhead who constantly sings the names of Krishna. Although His complexion is not blackish, He is Krishna Himself. He is accompanied by His associates, servants, weapons, and confidential companions."

“O most munificent incarnation! You are Krishna Himself appearing as Shri Krishna Chaitanya Mahaprabhu. You have assumed the golden color of Srimati Radharani, and You are widely distributing pure love of Krishna. We offer our respectful obeisances unto You.”