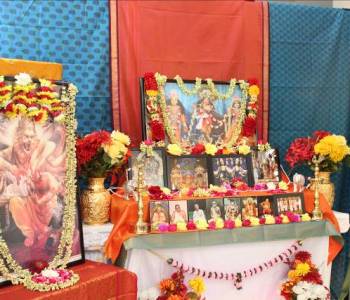 
In Cumming, Shrila Maharaj explained how Ajamila was saved by the Vishnudutas from the yamadutas and in this connection he quoted what Yamaraja instructed his servants, "One who constantly hears and chants the holy name of the Lord and His activities can very easily attain the platform of pure devotional service, which can cleanse the dirt from one’s heart. One cannot achieve such purification merely by observing vows and performing Vedic ritualistic ceremonies. It is a fact that even a chronically sinful person who chants the holy name of the Lord, although not completely without offenses, does not take another material birth."

Shrila Maharaj, while describing the battle between the demigods and the demon Vritrasura, informed that at the end of Satya-yuga and the beginning of Treta-yuga, a great fight took place between the demigods and the asuras. Unable to tolerate the effulgence of the demigods, the asuras fled the battle, leaving Vritrasura, their commander in chief, to fight for himself. Vṛitrāsura, however, seeing the demons fleeing, instructed them in the importance of fighting and dying in the battlefield and said, “There are two ways to meet a glorious death, and both are very rare. One is to die after performing mystic yoga, especially bhakti yoga, by which one can control the mind and living force and die absorbed in thought of the Supreme Personality of Godhead. The second is to die on the battlefield, leading the army and never showing one’s back. These two kinds of death are recommended in the śāstra as glorious." Shrila Maharaj clarified that though Vritrasura was a demon he could talk philosophy because he was a devotee king named Chitraketu in his previous life and due to a curse had to take birth as a demon. In this context, he also described the story of King Chitraketu and how he met the Supreme Lord and received knowledge from Him. 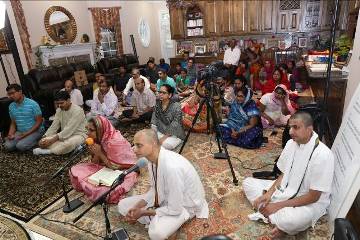 (Left) The topic in Johns Creek was Prahlada Maharaja, the Saintly Son of Hiranyakasipu.

In Johns Creek, Shrila Maharaj spoke the Science of God from Canto 7, explaining how Hiranyakasipu terrorized the universe and his saintly son Prahlada. Prahlada Maharaj, speaking about devotional service to Lord Hari, told his schoolmates what he learned of Bhagavata dharma in the womb of his mother. Shrila Maharaj also described the four social classes known as varnashrama dharma, the regulative principles to be followed by sannyasis, and the occupational duties of a householder.

On April 28, GVA celebrated Shri Nrsimha Chaturdasi, the appearance day of Lord Shri Nrsimhadeva. This has been observed for millennia in India and is now celebrated worldwide. His story is beautifully told in Shrimad Bhagavatam. Lord Nrsimhadeva is known as the protector of His devotees and the remover of all obstacles and difficulties on the path of devotion. On this auspicious day, Shrila Maharaj gave initiation to devotees and explained the importance of being initiated. Later, he gave a special discourse on the killing of Hiranyakasipu by Lord Nrsimhadeva and how Prahlada pacified the Lord with his prayers.

Prahlada Maharaja was the best among exalted devotees. He said, “O great one, O Supreme Lord, because of combination with pleasing and displeasing circumstances and because of separation from them, one is placed in a most regrettable position, within heavenly or hellish planets, as if burning in a fire of lamentation. Although there are many remedies by which to get out of miserable life, any such remedies in the material world are more miserable than the miseries themselves. Therefore I think that the only remedy is to engage in Your service. Kindly instruct me in such service.”

He continues to pray, “O my Lord Nrsimhadeva, by engaging in Your transcendental loving service in the association of devotees who are liberated souls [hamsas], I shall become completely uncontaminated by the association of the three modes of material nature and be able to chant the glories of Your Lordship, who are so dear to me. … In this way I shall undoubtedly be able to cross the ocean of nescience.”

In terms of protection in this material world, he prays, “My Lord Nrsimhadeva, O Supreme, because of a bodily conception of life, embodied souls neglected and not cared for by You cannot do anything for their betterment. Whatever remedies they accept, although perhaps temporarily beneficial, are certainly impermanent. For example, a father and mother cannot protect their child, a physician and medicine cannot relieve a suffering patient, and a boat on the ocean cannot protect a drowning man.”

Lord Nrsimhadeva wanted to bestow benedictions upon Prahlada Maharaja, one after another, but Prahlada Maharaja, thinking them impediments on the path of spiritual progress, did not accept any of them. Instead, he fully surrendered at the Lord’s lotus feet.

In Alpharetta Shrila Maharaj gave in-depth explanations of the yoga system and the process of meditation as spoken by Lord Krishna to Shri Uddhava in Canto 11 (the Shri Uddhava Gita). Devotional service to the Supreme Lord is the most excellent method of spiritual practice. Shrila Maharaj also spoke about Lord Śrī Kṛṣṇa’s manifest opulences in terms of His specific potencies of knowledge, strength, influence, and so on. On the final day of the discourse, Shrila Maharaj held an enthralling group kirtan session. GVA Gurukul students recited slokas from Shrimad Bhagavatam and Shri Bhagavat Gita. Spiritual seekers and devotees from Missouri, Washington D.C., New York, Arizona, and Texas traveled to Atlanta and attended the sessions.

Shrila Maharaj held kirtans at the airport before departing from Atlanta to continue his preaching mission in Europe. Many travelers at the airport were very much attracted to the kirtan. They met Shrila Maharaj, spoke to him in person, had photo sessions and received his blessings. 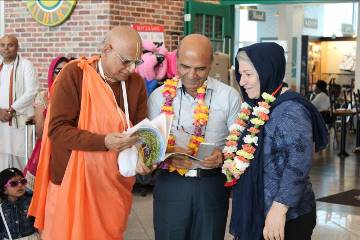 (Left) Shrila B. S. Tirtha Maharaj at the Atlanta Airport.

Gaudiya Vaishnava Association (GVA) was founded by His Divine Grace Shrila Bhakti Swarup Tirtha Goswami Maharaj with the sole objective of spreading spiritual awareness all over the world, and to propagate, preach, and promote the only means of deliverance—the chanting of the Holy Names of God, Shri Krishna.

Reading Shrimad Bhagavad Gita and Shrimad Bhagavatam brings about peace of mind, soul, and body. Shrila Maharaj has given discourses which are available in CD/DVD/USB media for the benefit of all groups of people. Interested people are welcome to contact GVA at 1-888-9GVA-USA or visit online at www.bhagavatvani.org. 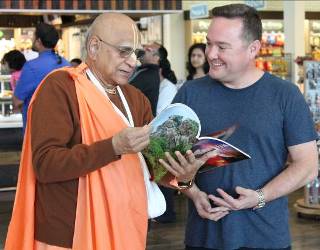