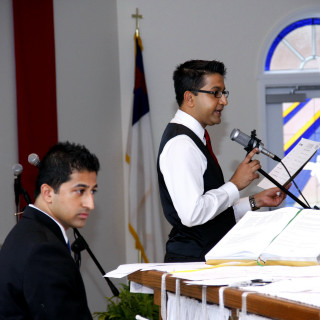 The end of October is usually filled with pumpkins, candy and Halloween decorations. But instead of picking scary costumes, students at Studio! Music Academy picked songs to perform for the school’s 5-year-anniversary recital. Students at Studio! learn classical piano, voice, and Bollywood piano. This year’s theme, A Musical Journey, showcased three segments: Classical Compositions, Voices and Vibes, and Bollywood to Hollywood. More than 100 music enthusiasts graced the Prince of Peace Lutheran Church in Alpharetta on Sunday, October 28, 2012 for the piano/voice recital.

Founder/Director of Studio!, Archith Seshadri, and Assistant Director/Piano Teacher, Ashwin Seshadri, emceed the program, which started promptly at 2pm. The afternoon began with a rendition of the Indian and American national anthems on the piano. Each student performed a classical piano piece ranging from Beethoven’s “Ode to Joy” to Burgmuller’s “Arabesque.” Other popular classics included Scott Joplin’s “The Entertainer,” “Oh Suzannah,” “Auld Lang Syne,” and “Vande Matram.” Some students even composed their own songs for this section. 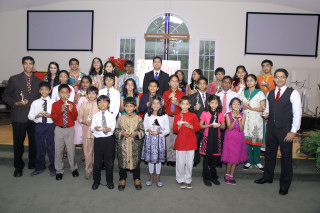 Prateek Vishvanathan (left), Ashwin (center) and Archith (right) (the Seshadri brothers) with some of their students.

The next segment had students showcase their vocal ranges. Some of the kids performed popular Disney tunes from The Little Mermaid and Beauty and the Beast. One student performed an Indian classical piece (Carnatic varnam) on the piano while singing the song, showcasing a true fusion of the two styles of music. Voices and Vibes ended with three chorus pieces where all the students sang “Be Kind To Your Parents,” “Castle on a Cloud” (Les Miserables) and “Do Re Mi” (Sound of Music).

The final segment of the recital showcased the transformation from East to West. Several senior students performed popular Bollywood tunes on the piano! The songs ranged from the latest films like Rockstar (“Tum Ho”) to yesteryear classics like “Chura Liya.” Some students even played Broadway classics in this segment including songs by The Beatles and The Sound of Music. Other popular songs from Tamil and Telugu movies also made this segment popular with the audience. This section concluded with a rendition of “Jai Ho” from Slumdog Millionaire.

The school’s teachers performed a surprise ensemble as the show reached a finale. The Seshadri brothers performed a piano/voice piece jamming to “Yesterday” by The Beatles. Archith Seshadri also dedicated a song to his mom with a soulful rendition of “The Prayer.” One of Studio!’s newest teachers, Prateek Viswanathan, played “Au Clair De La Lune” and Ashwin Seshadri concluded the recital with his own composition and the song “Khuda Jaane” from Bachana Ae Haseeno.

The recital ended with each student receiving a musical trophy for their performances. WeSap served as the Gold sponsor for the recital. Eye Level of Duluth, DJ Jaz, Mehul Designs, Yagna Collections, and Bhojanic were Silver sponsors. Rajesh Jyotishi and Associates and the Rao family served as Bronze sponsors.