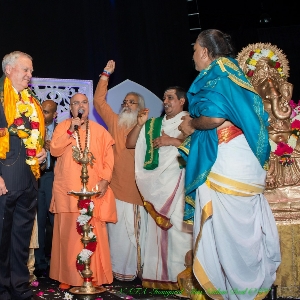 Swami Adhyatmananda welcoming the Governor and his wife at the 2nd NATA Convention.

Swami Adhyatmanandaji’s stay in Atlanta from June 25 to July 6 was a hectic one, as he attended 3-4 programs every day. People from various cultures and backgrounds had the opportunity to hear Swamiji and speak with him one-on-one. Swamiji addressed social workers, community leaders, businessmen, professionals, students, and spiritual seekers.

Rotarians: Immediately after his arrival in Atlanta, Swamiji attended the installation of new office bearers of the Rotary Club of Emory-Druid Hills and gave the keynote address, words of wisdom about building peace across nations, meeting basic human needs, leadership, attendance and service above self.


IPN: The next day, Swamiji addressed a group of businessmen and professionals at an Indian Professionals Network (IPN) meeting. Attendance was impressive despite the fact that Consul General Ajit Kumar was hosting a reception in honor of visiting dignitary Sri Harsh Vardan, Government of India Minister for Health. Shiv Aggarwal and Dr. Ravi Sarma introduced Swamiji. Dr. Sarma described Swamiji’s gift to us as his unconditional love and affection. “That’s what I go away with every time I see Swamiji. If you ask me what he told on scriptures that day, I may not be able to remember. But when I think of Swamiji, I think of his smile, genuine love, and affection.”

Swamiji spoke on the secrets of success in professional and business life: “Have a strong foundation. … Working hard is a must. … Success is possible with seriousness and sincerity. Be true to yourself. Identify yourself with business, profession. Don’t keep yourself separate. Thinking and planning is essential. If you flourish in the profession, you should be kind hearted and soft hearted and have sweet tongue. Don’t be harsh. Smile, quality, and hard work are the secrets of successful business. Plan and execute with love and affection. Choose whatever you want, small or big. Business is not someone’s forefather’s property. It is your property. What is needed is courage, seriousness, effort, hard work and loyalty. That will come only when you love your profession. … Never take the profession easy. Exhaust, alert, strive, and struggle. Sowing the seed is not enough. You have to nurture it patiently and be vigilant. Don’t lose charm. Anything you want to do, physical fitness is a must. Don’t agitate, don’t disturb yourself. Don’t keep your ego up. Be kind, humble, noble, and simple. Whatever you are supposed to do, you do that at that time only. Keep in mind ‘DIN’ – Do It Now and ‘KIV’ – Keep It in View.”

To a question on spiritualization of professional life, Swamiji said that if, no matter what you are doing, you are thinking of God, then your profession becomes spiritual.


Hindu Temple of Atlanta: As always, Swamiji was received at the temple with all honors and purna kumbham with musical instruments being played. After darshan of temple deities, Swamiji addressed the gathering. He took the starting word ‘Viswam’ from Sri Vishnu Sahasranama and gave an impressive and detailed explanation of its meaning as the cosmic form of the lord, within and without, the supreme existence.

Hema Malini: Hema Malini, a well-known film artist and Bharatanatyam dancer, was in Atlanta presenting her dance ballet Durga. Swamiji said that maturity comes with age, but along with age, there is need for inner peace, inner power, and perseverance. Only after achieving such heights can one consider oneself worthy of serving the pious Brij Bhoomi as a Gopi.

As a citizen of Ahmedabad, Gujarat for the past 20 years, Swamiji has known Narendra Modi from close quarters. He spoke of Modi as a great leader and Hema as a soldier of such a leader. “Narendra Modi has emerged as a new ray of hope in creating a new Bharat in the midst of its downfall,” he said, “and we are proud of that. Just like Maa Durga has several arms spread out in the service of mankind, Hema Ji, “He Maa” (dear Mother), please convey our message to Honorable PM Narendra Modi to spread his resources to restore prosperity in the rest of the states of India, similar to what he has already done in some, and create a new and prosperous India.”

Gujarati Samaj: At the Gujarati Samaj, attendance was impressive. Swamiji first garlanded three senior couples above 80 years old. He exhorted members to teach their children their culture and language at home, saying however that they are Indians first and then Guajarati. He commended the Samaj for their good works and encouraged them to be united. He asked members not to inflate their ego, but to respect each other.


Sri Harsh Vardan: Swamiji had a brief meeting with India’s Minister of Health, during his visit to Atlanta.

Swamiji’s busy days started with conducting yoga asana classes in Global Mall in the mornings, and included home visits and satsangh, evening lectures, special requests, and visits to sick ones.