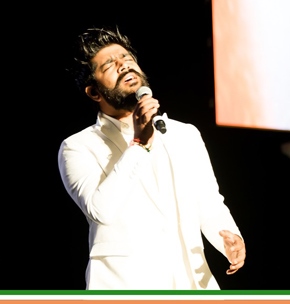 The spectacular cultural show featured over 600 participants, and exceeded 4 hours. Playback singer L. V. Revanth (left), winner of Indian Idol 7, was one of the highlights of the show. (Photo: Vakiti Creations)

For Indians, Alpharetta, one of the fastest growing suburbs of Atlanta, has become like home away from home as many IT companies, Indian restaurants, and Indian grocery stores seem to be coming there almost every other day. So the location was convenient, even perfect, with large parking space, a huge stage, and enough room for 45 vendors to display their products. The banners and decorations added the ambiance of a mela. A twelve-foot India Gate replica and cooling fans welcomed guests at the entrance. The stage was adorned with flags of both India and the U.S.

A slide show of the objectives and mission statement of IFA was shown to share the purpose of Freedom Mela: to bring the community together in large numbers, to reflect its strength to the mainstream, and to help Atlanta to grow like New York and Chicago communities so that we will have more Indian ministers and dignitaries visiting Atlanta. IFA's women's wing, Sakhis, addresses social issues of the community.

Young children participated in Legends of India, dressed as freedom fighters, Mahatma Gandhi, Jhansi Ki Rani, and others, imprinting in their young hearts examples of the heroes of India. In the opening parade were people from 28 states of India and union territories, and at the end the IFA committee members entered with their flag with much pride and enthusiasm. Emcees did a wonderful job of educating the audience about states and territories. 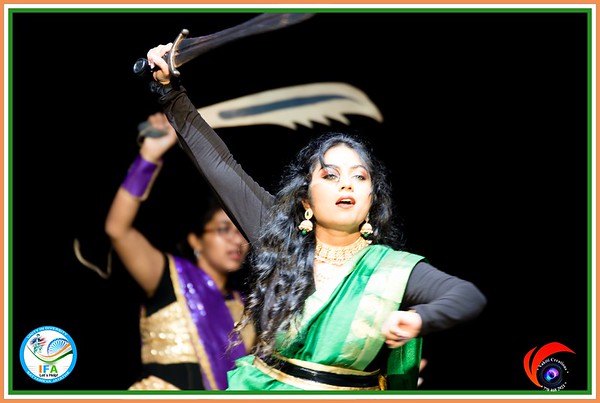 Following the parade, a cultural spectacular of over 30 performances by over 600 participants, exceeding 4 hours, depicting the arts and culture of various states, was presented by several dance schools and community organizations. The day was packed with rich colors and great entertainment. A special performance by Shiv Institute of Dance was one of the program highlights. The music concert by Indian Idol 7 winner Revanth was the highlight of the event, as it got tremendous response from the crowd. Revanth entertained the audience by singing in Hindi, Telugu, Tamil, and Punjabi. Emcees Monty, Nikhita Kokkirala, and Rhea Nara engaged the audience.

Freedom Mela 2019 had more than 45 vendors with ethnic clothes, jewelry, mehndi artists, education services, business services, and delectable Indian cuisines. There were some freebies: food samples and promotion material were given away by the sponsors. There were several eatery booths with hot piping dosa to cool sugarcane juice which was squeezed fresh on site, bringing back beautiful memories of eating on the streets in India. 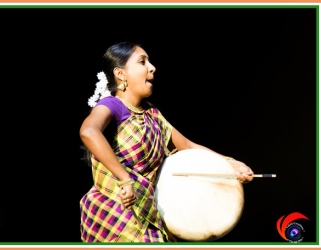 Several photo galleries by Sri Photos are posted on Facebook, e.g. 108 photos on the

Basant Pallavi performance by Abhinaya Dance Academy:
Pallavi is a pure dance item in which a raga is elaborated through eye movements, body postures and intricate footwork. Pallavi literally means blooming. This is applicable not only to the dance but also to the music, which accompanies it. Pallavi starts with slow, graceful, lyrical movement of the eyes, neck, torso and feet and slowly builds in a crescendo to climax in a fast tempo at the end. The name of the dance item is always based on the Raaga of the song accompanying it. For example, Basant Pallavi is performed in Basant Raaga and celebrates the advent of spring in all its glory.
Photography by Suresh K Volam & Kamala Kuricheti