COVID-19  In-depth info for Indians in Atlanta/Georgia. Click here
Home > Magazine > Around Town > Tribute to Sushma Swaraj on her death

Tribute to Sushma Swaraj on her death 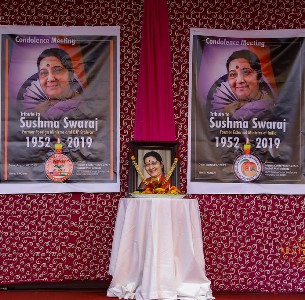 Overseas Friends of BJP and Federation of Indian-American Associations of Georgia (FIA GA) organized a condolence meeting at Impact Hall in Global Mall in Norcross, Georgia on August 7, 2019 in honor of Sushma Swaraj, India’s foreign minister during Prime Minister Narendra Modi’s first term of office; she passed away in Delhi on August 6 after cardiac arrest.

The evening began with invocation prayers by Gyan Prakash, priest at Siddhi Vinayak Mandir. Various community leaders came to offer their tribute to the daughter of India who was lovingly called Didi. Many flowers were presented at the picture of the beautiful smiling face of Swaraj who was always seen in a saree and large red tika. Her image reflected her strength of dedication, some said, and her smile was the refection of a Divine Mother who cared for everyone in need of help. 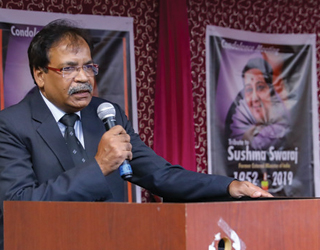 Vasudeva Patel, past president of Gujarati Samaj, began. Consul Asim Kumar shared his personal experience with Swaraj. On one hand she had the gift of oratory and was soft hearted; on the other, she was a tough taskmaster who got things done. She started her career in 1977 at the age of 25 and served four decades in the field of politics in various capacities: senior BJP leader, parliamentarian, Minister of Information and Broadcasting, Minister of Family and Health Services—and she was the best External Minister, he added.

All who spoke expressed deep respect for the dedicated life that Swaraj had lived in service of Indians and people of Indian origin. Her dignity, courage, respect, and dedication were noted throughout the evening by various speakers.

Amarjit Duggal said she was a saint who has gone home, so we should not feel sad. According to Guru Bani, we don’t have to mourn death; we distribute Kana Prasad for the soul who has gone home.

Dr. Prasad Garimella said that even though doctors can become numb to death, hearing of Sushma ji’s death saddened his heart. One’s life is to be evaluated not by their worldly achievements but by what is in accordance with God. He recited Bhagavad Gita - Chapter 12, verses 13-20 slokas and said that she displayed 35 characteristics of a person who is dear to God as stated in these 8 slokas.

Sathyanarayan Reddy described her as goddess Parvati or Lakshmi, more real than the pictures we worship at home. To people of Telangana, she is Chennama mausi. He shared his experience meeting her in 2010 when she assured the youth that there will be Telangana and in the meantime not to commit suicide. He chanted Mahamritunjaya Mantra to pray for her. 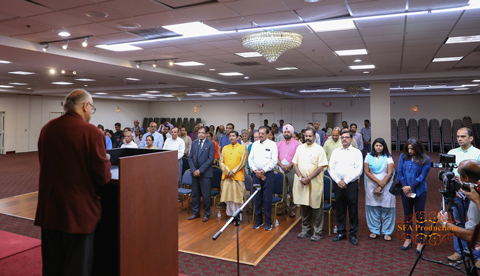 (Left) Subash Razdan spoke and led a moment of silence for the deceased. (Photo: SFA Productions)

On the lighter side, Subash Razdan reminded everyone to focus on the celebration of her life and said that every time she came on TV, he told his wife Raj, “Here comes Pataaka (firecracker).” Pataaka she was whether she spoke in Hindi, English, Urdu. Or Sanskrit, was added by someone in the audience.

Lastly, Shiv Aggarwal said, “Honorable Sushma ji waited to see the freedom of Jammu and Kashmir before she left. She brought dignity to India and Indians all over the world where she visited. We need to keep the legacy of respect and dignity going.” His prayer is that she returns to serve our future generations.