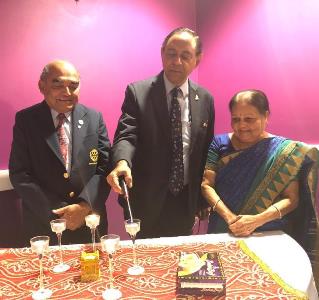 The evening’s meeting was called to order by Past President Upendra Bhatt with his welcome address. The pledge of allegiance and 4-way Test was rendered by Rotarian Rani Singh.

As part of the Diwali celebration, lighting of a lamp was done by Consul Shailesh Lakhtakia, President Chittaranjan Jyotishi, and Past District Governor Bob Hagan. After the devotional grace, President Jyotishi explained the significance of Diwali and how the celebration was connected with the values of Rotary International: Love, Give, Help, Trust, Service, and Hope. He prayed that the knots of our life be released so that we can better serve community.

(Left) Gathering around at the Diwali celebration at the Rotary Club of Emory Druid Hills. (Photo: Manoj Barot)

Consul Lakahtia happily announced that India is polio-free. In addition, in collaboration with CDC, the death rate has declined, life span is longer, life is getting better for many, and more people are able to overcome medical challenges. It's through the Indian government efforts, and several organization that supported to achieve this goal. He expressed appreciation especially to Rotary for helping the Indian government to eradicate polio from India.

He invited everyone to attend United Diwali Fest, with free food, a free program with several dance schools participating, and free parking. This event brings all religions together in celebration of victory of light over darkness, he added.

Information was given about October 24 being World Polio Day; this was shared by PDG Bob Hagan, who has been involved in this project for 25 years. He received a check for $200 towards the event organized for the next day by CDC in observation of World Polio Day. Despite tremendous progress, the final mile to eradication in a couple of countries is still there. The dedication of Rotary International Club members, who put service above self, has played a major role in helping this cause worldwide.

To overcome the final hurdles to eradication of polio, this club raised $50,000 to help those few places where polio is still prevalent. Manoj Barot shared that the youth members (ages 5-15) of Gujarati Cultural Association of North America helped raise the majority of the $50,000 by recycling, selling lemonade, and asking aunts and uncles to donate. Kumud Savla donated all earnings from the annual NNKB dance recital and graduation ceremony towards this cause.

A project was mentioned that helps more than 1000 leprosy camps, where patients live in isolation. The Rotary Club of Bakersfield, CA donated $50,000 to this club for good drinking water and sanitation.

The National Anthem and an invocation of Lord Ganesh was sung by Rotaract member Nehal Vyas. Members of Rotaract club joined in the celebration. Retroact is the youth wing of Rotary; members exchange ideas with leaders in the community, develop leadership and professional skills, and have fun through service.

Mr. Ismail Ghanchi and Dr. Dilip Patel were inducted by PDG Bob Hagan. He welcomed the youngest member of the 1.2 million membership. They received pins and a book of instruction. A pin of recognition and a medal saying “Rotary Connects the World” were given to Geeta Mehrotra of Khabar and Jyothsna Hegde of NRI Pulse for their service. PDG Bob Hagan shared that he wears the pin every day to remind himself to do one good act every day; he said he’s proud to be a Rotarian and encouraged everyone to keep the pin with their car keys and wallet so they can remember to wear that pin every day. And if you follow the 4 way test, you will not go wrong, he advised. He shared his experience of visiting India which was hosted by PP Chandler and Paddy Sharma.

After the vote of thanks by President Jyotishi, dinner was announced, and members enjoyed the social atmosphere.