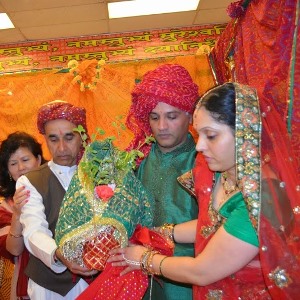 Tulsi Vivah is the ceremonial marriage of the tulsi plant (holy basil) to Lord Vishnu (Krishna). Tulsi Devi (in the photo at left) is venerated as a goddess in Hinduism and is considered vishnupriya, wife of Vishnu. Generally, Tulsi Vivah is performed by two couples, one from Tulsi Devi’s family and other from Lord Krishna’s.


On Sunday, November 2, 2014, the marriage of Tulsi Devi with Lord Krishna was performed as a traditional Hindu wedding with festive atmosphere. A mandap was set up in the middle of the Shree Mandir prayer hall. The bride (Tulsi Devi) was clothed in a sari and ornaments including earrings, necklaces, bangles, etc. The groom, a brass image of Lord Krishna, was clothed in a dhoti. Both Lord Krishna and Tulsi Devi were bathed and decorated with flowers and garlands before the wedding. 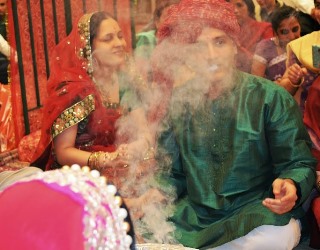 The representative on the bride's side (left) offering ahuti (oblation, powder that looks like smoke) to the fire (God).

The baraat (wedding procession) carrying Lord Krishna was led by a dholia (drummer) and dancing baratis. At the entrance of the prayer hall, the baraat was received by the bride’s side. The wedding ceremony was performed by the temple priest, Keshav Joshi along with chanting of Vedic Mantras. The baraat couple was linked with a cotton thread (mala) in the ceremony.


At the completion of the wedding all the devotees offered shagun (gifts) to Tulsi Devi. Many ladies and gents performed raas garba with harinam sankirtan (devotional singing) and dancing. This was really a joyful event with the feeling of a real wedding. At the end over 100 devotees were served a sumptuous feast including plenty of sweets. 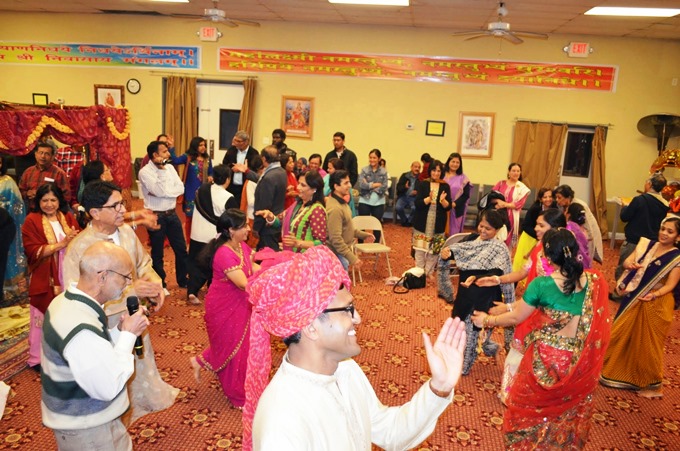 Dancing after the wedding.


[The article above appears only on the website for December 2014, not in the print/digital issues.]