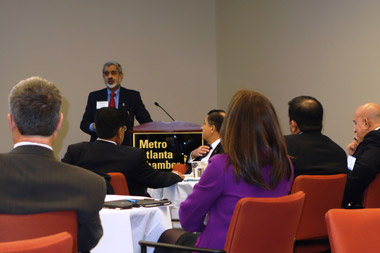 At a seminar on "American Higher Education in a Changing Global Economy" held at the Metro Atlanta Chamber on December 5, 2013, Ani Agnihotri was commended for his visionary work by Dr. Sandra Jordan, Chancellor of the University of South Carolina: the forum he had arranged through USIBRC and Georgia Tech's CIBER brought scholars and business executives together to share detailed statistics on students, schools, and their financial impact for the United States, India, China, Europe, and other nations, as well as trends, problems, and possible solutions in global education.

The importance of the seminar was underlined by Jorge Fernandez of the Chamber, both for metro Atlanta, with its 275k students in 66 colleges/universities, and for business in general, since education fuels business with talent, discovery, and commercialization of knowledge.

Consul General Ajit Kumar led the opening remarks, emphasizing that higher education is also a bridge connecting countries. He related the history of India-US educational connections from the days of the US helping India with education and food, through the Nehru Fulbright program and Passport to India,to today's numerous partnerships. US higher education has been the best in the world, he said, and over 100k Indian students are in US universities, bringing tuition fees with them. Now India is looking at US patterns of community colleges with a goal of creating 200 such institutions.

John McIntyre of CIBER brought out the numbers for Georgia: 16,670 international students, including 4,700 at Georgia State, bring half a billion dollars into the state, which competes with carpet industry figures. Of the 820k international students in the US, 250k are from China; compare only 285k US students going overseas—a mismatch.

Five trends in global education were outlined by Sandra Jordan: 1) Visibility, with online information and world rankings so that students can shop—and online courses exploding; 2) Mobility, with joint programs, shared faculty, and accreditation helping the 4.3 million students outside of their own country; 3) China/India/South Korea as educational consumers, making up 50% of the international students in the US; 4) Investment in education increasing along with competition in Asia and SE Asia, compared to investment in higher education here decreasing; 5) the Bologna Agreement leading to students in Europe staying in Europe, as well as perhaps leading to more US students in Europe and fewer European faculty here. These are issues for both research institutions and comprehensive and liberal arts universities, many of which are in small towns with less diversity and which therefore value international student travel.

Significant fundamental problems in US higher education include lack of concrete evidence that we prepare students. Doug Hooker of the Atlanta Regional Commission noted that although 35% in the metro have a college degree (better than most areas in the nation), many of these are from away; moreover, a third of students here do not graduate, 72% of the graduates enter college, but then only a third graduate with a BA in 6 years—which works out to be not a good total at all. Furthermore, the area has more job opportunities than there are unemployed, which says that education and jobs are misaligned—however, the state has pulled support back by $1B over the last 4 years. 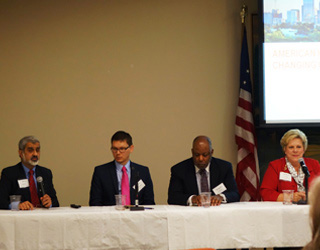 Dr. Beheruz Sethna of the University of West Georgia declared that the idea of "American exceptionalism" is blinding us to seeing what we are doing and need to be doing. Peter Drucker was wrong, he said: we need to get into new markets but never abandon old niche segments—bricks and clicks will continue together. He noted that American maps show the US in the center, but we need to get away from our culture to see it in perspective. For example, "For America to lead the world, we have to first join it" by abandoning the connection with Liberia and Myanmar and adopting the metric system! And of course, we should invest in our stars, higher education and entrepreneurship—which we are not doing.

To John McIntyre's question of how to keep our star students here, Hooker replied that because there is no support for startups, the Metro Atlanta Chamber and others are stepping in—and because businesses are demanding more walkable communities, the environment must change to attract corporations who provide jobs. Sethna declared that we must not tap dance around the responsibility of parents who must set the culture at home: the admonition used to be "finish your dinner because people are starving," and now must be "finish your homework because people are starving for your jobs!" We even need to teach this to parents, confirmed Jordan. And supporting the bill to help retain STEM students with H1-B visas was highlighted.