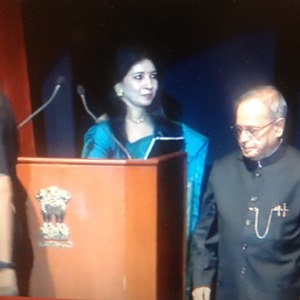 The Encyclopedia of Hinduism, born at the University of South Carolina, Colombia out of a tremendous labor of love for its academic and intrinsic values, eventually made its way to India’s Rashtrapti Bhavan. The U.S. launch, in the presence of India’s Consul General Ajit Kumar, Governor Nikki Haley of South Carolina, India’s Gandhian crusader Anna Hazare, Swami Chidanand Saraswatiji, USC Colombia’s President Harris Pastides, South Carolina Senators, and University Professor Dr. Meera Narasimhan who was behind this decade-long effort, was detailed in the November 2013 issue of Khabar magazine.

Dr. Narasimhan read messages from Governor Nikki Haley and USC President Harris Pastides on this historic event. USC had served as a platform for over 10 years in bringing together 1000 scholars in Hinduism from all over the world to work on this literary treatise, the Encyclopedia of Hinduism, international edition. Dr. Narasimhan had the privilege of emceeing the event at the Rashtrapathi Bhavan, of the presentation of the 11 volumes of the Encyclopedia of Hinduism, International Edition to the President of India.

"It was an incredible honor to be invited by Pujya Swami Chidanand Saraswatiji; God's grace has allowed me to be associated with this epic effort, the passion, love, and arduous effort and expertise of the 1000 unsung heroes, the scholars who have provided this monumental treatise as one of the greatest gifts to mankind, a legacy for generations to come," said Dr. Narasimhan. 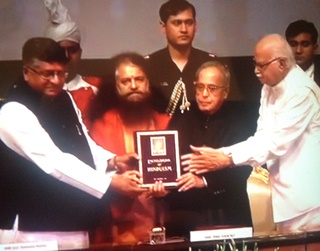 President Mukherjee said that Hindu religious philosophy identifies Dharma, Artha, Kama, and Moksh, as the foremost objectives of a human being. Striking a balance in human behaviour in working towards these objectives has been prescribed as a key aim of human existence. Quoting Dr. Sarvapalli Radhakrishnan, he said that Hinduism is not just a faith. It is the union of reason and intuition that cannot be defined but is only to be experienced.

President Mukherjee elaborated that the basic tenet of Hinduism is happiness, health, and enlightenment for everyone and suffering, pain, and agony for none. He quoted Mahatma Gandhi and said “If I were asked to define the Hindu creed, I should simply say, Search after truth through non-violent means. A man may not believe in God and still call himself a Hindu. Hinduism is a relentless pursuit after truth… Hinduism is the religion of truth. Truth is God. Denial of God we have known. Denial of truth we have not known.”

Swami Saraswatiji, founder-chairman of India Heritage Research Foundation and of the Encyclopedia of Hinduism project, explains, “The wisdom, truths, teachings, and insights of Indian and Hindu culture are not limited to or applicable to only Hindus or Indians. Rather they belong to the world and can deeply benefit the world. It is, therefore, our aim that the richness of this ancient yet timeless culture and heritage should be made available to the entire world, in a way that is authentic, academic, comprehensive, and illuminating. However, of course, the teachings, truths, tenets, and insights of Sanatan Dharma took birth in India. Therefore, to have the religious leaders of India present the Encyclopedia to the Honourable President is a beautiful and most-fitting symbol of the ‘Unity in Diversity’ which is our Mother India.” 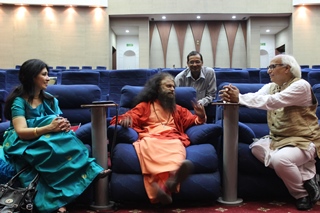